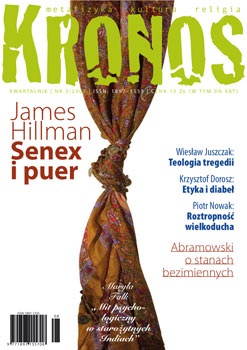 Spis treściEdytorialSummariese-book
3/2007
JAMES HILLMAN
Tomasz Stawiszyński
Soul and pathologizing in James Hillman’s archetypal psychology
This essay investigates the idea of soul and pathologizing in James Hillman’s archetypal psychology — one of the most inspiring and interesting paradigms of contemporary thought. Following Hillman’s ideas expressed in “Suicide and the Soul”, “The Dream and the Underworld” and “Re–visioning Psychology”, Tomasz Stawiszyński focuses on the problem of suicide and depression to show that from the point of view archetypal psychology pathological phenomena are inherent and crucial constituents of psychical life. This is due to the fact that soul is radically different from spirit, just as the psychological model is radically different from the medical one (interested in health, growth, “getting better” etc. etc.).

Krzysztof Dorosz
New Ethics and the Pact with the Devil
The essay is a critique of Erich Neumann’s proposal for a new ethic which this disciple of the Swiss psychologist Carl Gustav Jung put forward shortly after the second world war. Neumann wrote a book on the new ethic in which he developed Jung’s idea of integrating the shadow. The shadow contains and conceals the unconscious contents of the human psyche, above all the evil that man does not want to face. Dorosz criticises both Neumann and Jung, arguing that the integration of evil, so much celebrated in Jungian psychology, is a dangerous chimera. Conceived of not as a mode of religious faith but as a psychological technique, it threatens man with being overwhelmed by evil. Hence those who try to integrate it into their psyche may end up entering a pact with the devil rather than disarm him.

Joanna Michalik
The Power of Abjection. On the Periphery of the Subject
The meaning of abjection cannot be reduced to its functions explained by the theory of evolution, anthropology or psychology. In respect to the concept of subjectivity which is constituted primarily on the level of sensuality, affectivity and interpenetration between the subject and the world, abjection can be seen as constitutive of subjective identity. Concerning first of all the substances that the body assimilates and excretes, abjection displays its ambiguity. It points subjectivity towards the traces of its own disintegration but at the same time — it conceals them. This ambiguity is investigated by Julia Kristeva in her Pouvoirs de L’horreur. Essai sur l’abjection. Kristeva’s investigation is a transposition of Mary Douglas’ research on purity and danger to the psychoanalytic idea of human experience.

Wiesław Juszczak
The Theological Foundations of Tragedy
The article addresses the question of myth as a theological category, a form of revelation which falls within the exploration of the chthonic and mystical aspects of tragedy, that is, of the nature of tragic theology. The point of departure is a critique of the anthropological theories and historical interpretations of myth with their understanding of mythology as a mere set of inquiries into the origins of the world, man and animals. The theory of myth spans between theology and ethnology. Myth is discussed as the most significant category of religion in the writings of the systematic Protestant theologian, Paul Tillich, who points to the essential affinities between myth and dogma. In such a reading, myth is not a dramatic form, but a dramatic development of dogma. Similarly, in the writings of Bronisław Malinowski — whose apparent functionalism needs to be re–interpreted — myth is defined as a primal, active force and not as a sensible explanation of the world. Further on, the intriguing reciprocity between myth and dogma is discussed in the context of mid–nineteenth–century studies into the nature of symbol. In terms proposed by Johann Jakob Bachofen, myth is an exegesis of the symbol; it unfolds the images as a series of interconnected actions, while symbol contains them all in one. In this sense, myth is always a narrative form, while dogma preserves the form of an axiom. Myth is not only a narrative about gods, or a sacred narrative, but a narrative situated at the borderline between the legendary and the historical; it is a story about human deeds directed towards the timeless. Even if we acknowledge the difference between the theological and the heroic myth, the latter is nevertheless always theologically oriented. The existential dimension of sacrum should therefore be understood as a process of becoming; only rarely does it reveal itself as an accomplished ‘state’. Tragic drama was founded on polytheistic religion and this is integral to the theological structure of tragedy. Paul Tillich enumerates three types of polytheism: universalistic, mythological and dualistic. The mythological type is seen as polytheism founded on monotheistic confines; there is a unity inscribed in the order of things, one highest power identified with Zeus, ‘this only god’. In tragedy, polytheism always reveals its monotheistic orientation towards an old and primal religion.

Piotr Nowak
Prudence of Phronimos (Some Remarks Concerning Nicomachean Ethics)
The essay analyzes the key terms of Aristotle’s Nicomachean Ethics: rationality, virtue, justice, the golden mean, friendship. Through references to Nietzsche and Gadamer, Aristotle is presented as the first philosopher of the West who separates self–understanding of the subject from the objective knowledge that he/she is searching for. “Who am I?” “How should I live?” “What do I live for?” — Aristotle never gives straightforward answers to such “grand questions”. The essential task of Nicomachean Ethics is to stress the necessity of self–improvement and of the struggle for the highest human values, rather than to impose stiff moral regulations and maxims.

Anna Dziedzic
Edward Abramowski’s Notion of Subconsciousness
At the beginning of his career as a philosopher and psychologist, Edward Abramowski became a supporter of neo–kantian phenomenalism. He believed that proper, scientific psychology and the belief in unconscious psychological phenomena were mutually exclusive. He rejected the very notion of an unconscious phenomenon. However, Abramowski soon acknowledged the existence of certain sensations of which we do not have any intellectual knowledge. He called them „subconscious” and linked subconsciousness with aesthetic and mystical experience. Finally, Abramowski developed the concept of „empirical metaphysics”.