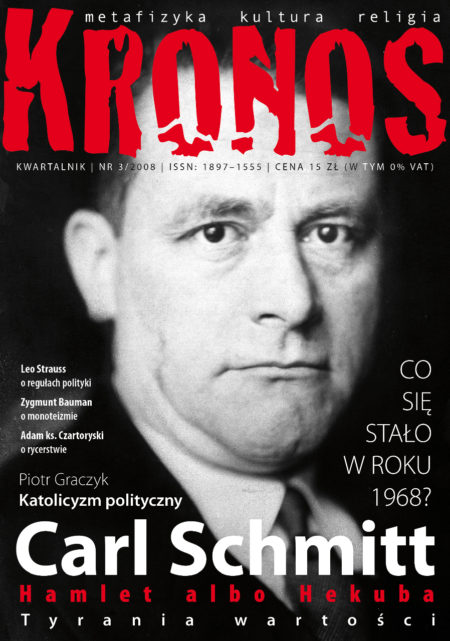 Spis treściEdytorialSummariese-book
3/2008
DLACZEGO SZEKSPIR, PO CO SCHMITT?
Gopal Balakrishnan
The Age of Carl Schmitt
Gopal Balakrishnan presents and proves his analysis of a text by Carl Schmitt. The analysis based on the chronological reconstruction of Carl Schmitt’s thought and his political actions is supposed to facilitate an objective evaluation of Schmitt’s values and political orientation and to determine the reasons and the degree of his involvement in the Nazi regime. The author presents the evolution of Schmitt’s works and looks critically at his texts from the years between 1919 and 1950. He postulates to perceive Schmitt’s thought as a strain of heterogeneous and sometimes even contradicting reactions to recurring problems of sociopolitical order brought about by the contemporary crisis of the classic European country image. Presenting a historical contextualization, he at the same time claims that Schmitt’s thought becomes relevant today in the current political and economical situation of the world, whose basis is becoming increasingly uncertain.

Jenna Silber Storey
Schmitt’s Decisionism Revisited
Carl Schmitt’s political philosophy is often described as “decisionism.” Its common interpretation, according to the author, is shaped under the influence of Karl Löwith’s analyses, which ascribe Schmitt the idea that politics is based on a decision aimed at immediate benefit and stripped of references to transcendent norms or values. Silber undermines the validity of Löwith’s analysis comparing Schmitt’s texts with views of authors that Schmitt commented upon, especially with Hobbes and the counterrevolutionaries. The author acknowledges that decision is a category which is important for Schmitt, but claims that its main role is to mediate between the transcendent norm and the world. The otherworldly law is the absolute source of power and authority, and the sovereign’s decision is only its articulation and its adjustment to the historical circumstances.

Piotr Graczyk
Political Catholicism
Catholicism equals Christianity plus politics. Within this equation, “Christianity” means the space of paradox – the coexistence of contradictory terms and views, the realm of unlimited freedom – and “politics” means the imperial principle. In his essay, Piotr Graczyk investigates some consequences of two opposite attitudes towards this historical marriage of faith and politics. The first attitude is represented by Carl Schmitt who opts for the “rich church”, i.e. the prevailing of the imperial principle over the principle of Christianity with its unlimited freedom. A different attitude is represented by Fyodor Dostoevsky who opts for the “poor church” which would imitate Christ in His Kenosis. Both attitudes have dangerous implications. An important motive of the essay is the analysis of the metaphysical roots of European anti-Semitism.

Zygmunt Bauman
Seeking in Modern Athens an Answer to the Ancient Jerusalem Question
Zygmunt Bauman begins with a bold parallel: Carl Schmitt’s Political Theology “was meant to be for the political theory what the Book of Job has been to Judaism, and through Judaism to Christianity”. According to Bauman both texts undertake the task of demonstrating the lack of contradiction between determining the norm and making an exception from it. It is this contradiction that destroys every attempt of speculative conciliation of God’s omnipotence with His absolute goodness in a monotheistic theodicy, the same way as the philosophy of a modern legal state understood as Rechtstaat is inevitably destroyed by the antinomy of concepts of a sovereign and conventional obligation. In Bauman’s interpretation, in proving that “the legal order rests on a decision and not a norm” Carl Schmitt attempts the same sort of justification of the arbitrary state power as the Biblical narrator who in the Book of Job exchanges “the frightening randomness of Nature as the frightening arbitrariness of its Ruler.”

Rafał Wonicki
The Politics of Power and Freedom in the Thought of Carl Schmitt and Hannah Arendt
The aim of the article is to outline and compare the way in which Carl Schmitt and Hannah Arendt understand the sphere of politics as well as analyse the concepts of power and freedom connected with their theories. Both Schmitt and Arendt criticise liberal democracy for its “neutrality” and juxtapose it with their own understanding of political action. Especially Schmitt who understands such action as a conflict between friends and enemies. By analysing the philosophers’ approach to power and contrasting their models of politics Wonicki draws conclusions about contemporary liberalism and indicates its limits.

Dariusz Czaja
Monstrous, all too human
“Human” act, “human” bevaviour… What does it mean, in fact? What does this familiar, and – as we used to think – semantically transparent phrase really mean? In spite of several horrifying facts provided by 20th century history (to confine our research to modern time), we still continue to attach positive connotations to the aforementioned adjective. Why?
This question is the crucial point of the outstanding book by Slavenka Drakulić They Would Never Hurt a Fly. War Criminals on Trial in The Hague (first published in 2004), a painful and engaging report from The Hague Tribunal examinations of Balkan war criminals. Dariusz Czaja reads it not as a historical analysis but above all as an extremely valuable anthropological evidence. Following the author he exposes the process of metamorphosis of the so called “ordinary men” into bloody slaughterers. In the conclusion, he maintains that the “ordinary” is separated from the “monstrous” by a thin red line.

An Editorial Debate: What happened in 1968?
Why are we still interested in the revolutionary and emancipatory – at least apparently – movement from 40 years ago? What are the consequences and – not less important – the sources of that ambiguous event (or Event, in Badiou’s sense) in the contemporary history of the West? Does a critical language exist with which we could describe and interpret the phenomenon of the meeting of the esoteric New Age with the progressive New Left and its rationality? The meeting – metaphorically speaking – of Huxley and the hippies trying to open the doors of perception with 3xM: Marx, Mao, Marcuse; and Gauchists trying to establish the brave new world of the future by throwing Molotov cocktails. In both cases, of course, in the name of love&peace. What are the differences between – for example – the French May and the Polish March of ‘68? Is Adam Michnik merely the provincial cousin of Master Daniel Cohn-Bendit?
Posing such questions “Kronos” – represented by Piotr Nowak, Janusz Ostrowski and Wawrzynie Rymkiewicz – engages in a discussion with Małgorzata Kowalska, professor of political philosophy, professor of sociology Paweł Śpiewak and professor of philosophy of law Tomasz Kozłowski. In the open and sometimes sharp debate Paweł Śpiewak compares 1968 to 1848 and calls it “the time’s axis” in the second half of the 20th century. Małgorzata Kowalska stresses that 1968 can be called an unsuccessful revolution of the left but – paradoxically – a successful liberal revolution, because in her view the New Left is very individualistic and has more in common with postindustrial capitalism than with the old idea of social justice. In this context Tomasz Kozłowski speaks about human rights as – to some extense – the heritage of 1968.

Michał Otorowski
Prince Czartoryski’s „New Middle Ages”: the vision and its contexts
The aim of the article is to present the long forgotten relic of Polish post-partitioning literature, namely Prince Adam Jerzy Czartoryski’s About Knighthood, to show the genesis and contexts of Czartoryski’s project of the resurrection of the Polish knighthood. The author points to the close kinship between Czartoryski’s text and The Manuscript Found in Saragossa by Jan Potocki who was closely related to Czartoryski both socially and professionally. At the same time he stresses the differences between the two visions of revitalizing the knighthood ethos. Among those differences the most important meaning the author ascribes to Czartoryski’s negative attitude towards eighteenth century conspirationism, at the same time emphasizing the Prince’s leanings towards a functionalist presentation of social structures and his references to Montesquie’s ideas. Furthermore, the author of the article is considering other possible contexts of Czartoryski’s vision. He points to the difficulties connected with its interpretation that stem from the fact that the precise chronology of the origin of About Knighthood is still unknown, what with the changeable political situation at the time and the enigmatic nature of the text itself is of the utmost importance.