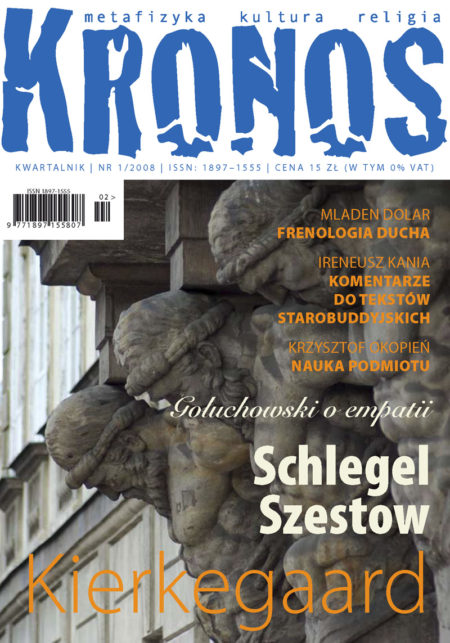 Spis treściEdytorialSummariese-book
1/2008
CHCEMY MOCNYCH DYSKURSÓW!
Krzysztof Okopień
The Study of the Subject. Seven lessons
The following essay is an attempt to redefine the philosophical idea of subject. The author draws the notion of subject from the critical lecture of the twentieth century discourse on subjectivity and its transgression. The text consists of seven parts (lessons) devoted to (as follows): Husserl’s phenomenological output, Marx’s dialectic, Heidegger’s ontology, Ricoeur’s hermeneutics, existentialism, the “reading subject” and, last but not least, attempt to radicalize Heidegger’s thought by means of the Polish idiom, for in the Old Polish, the word “subject” meant a “waif”, “foundling” or “reject”. This, significantly variant notion of subject, constituted in and through difference, is the keypoint of Krzysztof Okopien’s essay.

Mladen Dolar
The Phrenology of Spirit
Mladen Dolar presents a Lacanian interpretation of Hegelian dialectics of consciousness. As his starting point he takes a passage which is usually omitted by commentators of The Phenomenology of Spirit, namely — Hegel’s philosophical analysis of phrenology. Dolar argues that Hegel’s narrative of subjective certainty can be more accurately understood by employing Lacanian terminology, above all — the notions of objet petit a and das Ding. Dolar claims that that the Hegelian paradigm in Lacanian reinterpretation can help to resolve the clash between equational thinking (aimed at reducing “the other” to “the same”) and thinking based on the principle of heterogeneity.

Piotr Nowak
Life Everlasting
In his article Piotr Nowak discusses two basic problems of Kierkegaard’s “The Sickness unto Death”, the philosopher’s most personal book. These are (1) the ontology of despair and (2) the paradoxes of life everlasting. Man despairs because he cannot do otherwise — despair is a fundamental quality of the human condition and not merely a psychological ailment. We despair, because it is long recognized that our life is limited, that we cannot be whoever we want to be and for as long as we would like to be. Man despairs because of his mortality and he despairs because he is sinful. But he also despairs because of the risk which threatens his individual existence — the risk that his existence will be continuously repeated, in a circle of resurrections. And it is this life everlasting, blissful and painful, the incessant struggle to maintain one’s existence, which turns out to be the most dangerous thing a man can face; more dangerous even than death itself. By referring to the biblical figure of Lazarus in the introduction to his book, Kierkegaard only indicates the paradoxes of life everlasting — life which cannot die.

Małgorzata Grzegorzewska
How to spice a Christian
Małgorzata Grzegorzewska is concerned with the relevance of Soeren Kierkegaard’s thought for the contemporary debate about the end of Christianity. It is suggested that the philosopher’s criticism of the Church Triumphant and his attacks on domesticated religion may result in a fruitful re–evaluation of the doctrine of the Passion and Atonement. The scandalous vision of the crucified God remains for Kierkegaard the single most important point of reference for his philosophy. Although resistance to this “stumbling block” seems to have greatly increased in the twentieth century, we are at the same time observing a growing interest in the ethical/religious aspects of Kierkegaard’s multi–faceted writing.

Edward Kasperski
Johannes Climacus, or the Deconstruction of Philosophy
Edward Kasperski analyzes the notion of the subjective thinker in Kierkegaard’s writings, personified in the figure of Johannes Climacus. Climacus not only represents the modern philosopher, but also the man of faith and the process of “becoming a Christian”. Kasperski characterizes Climacus’ attitude towards philosophy and highlights the antinomies and paradoxes inherent in his philosophical proof of the impossibility of philosophy. Furthermore, one of the consequences of the deconstruction of philosophy, Kasperski argues, is its “belletrization”.

Łukasz Musiał
Arthur Schopenhauer, or the Theater of Suffering
Łukasz Musiał analyzes Schopenhauer’s views on suffering in its metaphysical, ethical and aesthetical dimension. Schopenhauer distanced himself from early 19th century German idealist philosophy. He accused it of sophistical speculation and of being too detached from immediate sensual cognition. By referring to Kant’s epistemology, Schopenhauer endeavors to establish a system of though which would embrace all aspects of reality without succumbing to the temptation of idealism. In order to achieve this he places the notion of the will at the center of his philosophical system. According to Schopenhauer it is precisely the will that determines the most universal and most tragic aspect of human existence — suffering. Musiał analyzes suffering as a philosophical category. He claims that the author of The World as Will and Representation “invented” (together with Kierkegaard) the modern philosophical language which makes it possible to address the problem of suffering, existential uncertainty, anxiety, the meaninglessness of existence — all treated as ontological categories.

Ireneusz Kania
An Interpretation of Certain Buddhist Terms
Ireneusz Kania focuses primarily on explicating the meaning of the term “exegesis”: he analyzes the theoretical and cultural context which has to be taken into account when translating ancient Buddhist texts. In the introductory paragraphs Kania refers to various examples (for instance “the number of the Beast” — 666) to show how certain decisions — made before translating a particular text or term — determine meaning itself (for instance the different theories of language implicated by the language of the original and the language of the translation). The reconstruction of the philosophical and religious context in which the original was created is seen as crucial in the exegesis of ancient Buddhist texts. By drawing a map of spiritual and ideological differences between Indian culture and that of the West, Kania shows how they influence the way we interpret Buddhism’s key terms.