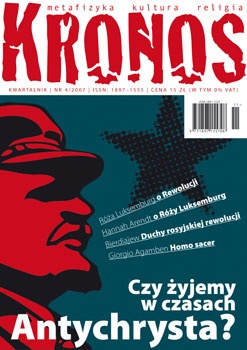 Spis treściEdytorialSummariese-book
4/2007
CZY ŻYJEMY W CZASACH ANTYCHRYSTA?
Andrzej Kołakowski
Catastrophe and Revolution: Polish Philosophers’ Views on the Russian Revolution
The author classifies Polish philosophers’ views on the Russian Revolution by introducing a typological key developed in relation to various forms of historiosophical catastrophism. A naturalistic interpretation of the revolution is presented on the example of N. Cybulski’s and R. Świętochowski’s writings. The eschatological point of view is explained by reference to M. Zdziechowski’s ideas, while the cultural perspective — on the basis F. Znaniecki’s and S. I. Witkiewicz’s work. Additionally, many writers are discussed whose opinions partly correspond to or are a combination of the above mentioned approaches, among others: Z. Wasilewski, A. Szymański, S. Grabski and J. Bruno. The author also expounds the interpretations of Bolshevism set forth by M. Massonius and R. Luxemburg whose essays are presented in this issue of KRONOS.

Magdalena Gawin
Women’s Rights and the Risks of Modernization in the Work of Bolesław Prus
Bolesław Prus was a distinguished Polish novelist and liberal commentator. The essay discusses his opinions on women’s rights and the problem of gender equality. The author emphasizes Prus’ ambivalent attitude towards the phenomenon of women’s liberation. This ambivalence, she claims, is typical of 19th century liberalism in general.

Jan Skoczyński
A Book without a Title
The author discusses From Petersburg to Leningrad — a collection of essays by Marian Zdziechowski (1861–1938): Polish historian, literary critic, philosopher and journalist. The essay aims at presenting the views of Polish cultural critics who analyzed the phenomenon of the Bolshevik Revolution. Skoczyński begins by recalling the figure of his old–time mentor Professor Stanisław Stomma (1908–2005), who for many years worked as Zdziechowski’s personal secretary.

Mateusz Werner
Witkacy and Modernity
The claim that history and its inner, progressive logic of development is a matter of fundamental interest in the thought of Stanisław I. Witkiewicz (Witkacy) is far from controversial. However, most interpreters of Witkacy’s philosophical output focus on the “catastrophical” aspect of his historiosophy, i.e. the negative evaluation of the historical necessity of social and scientific progress which inevitably leads humanity towards a utopian “society of the future”. This essay offers a different perspective on Witkacy’s historiosophy by examining his critical understanding of modernity as an epoch inaugurated by the French Revolution whose socially motivated imperative of increasing scientific and technological efficiency in conquering nature has resulted in the “disenchantment” of the human world (analogically to Max Weber’s “demagification”). From this perspective modernity is a period of militant anti–metaphysicism which results in a general barbarization of mankind. Witkacy’s criticism of modernity is not understandable without seeing it in the context of Russian nihilism with its radical revolutionary and anti–cultural moralism which for Witkacy represented the militant anti–metaphysical tendencies of modernity.

Piotr Nowak
The Revolution of Saint Paul the Apostle (remarks on St. Paul’s Letter to the Romans)
To become good Christians — the author claims — we must first become “Jews”, and experience their anxiety, alienation and homelessness. However, we will become “true Jews” only as Christians (in terms of St. Paul’s original, early Christianity). To prove this aporetical and dialectical thesis the author distinguishes two types of faith. One is based on the experience of the nation as a whole and ascribes special meaning to the law and to the rituals (this is the faith of the Jewish people). The other type (characteristic for Paul and for early Christianity) is derived from the act of conversion which leads to the absurd credo. The author proves that Saint Paul developed general outlines for a project to found a new community which was to include pagan and Jewish converters. This amounted to a revolution, since the first group had to deny the imperial order, whereas the second one — traditional law and faith of the fathers and the prophets.

Editorial Debate: Do we live in times of the Antichrist?
The basis or the pre–text for the debate is Piotr Nowak’s book The Ontology of Success. By and large, participants agree that his book fills a significant void in Polish philosophy of history after the fall of communism. Nowak rewrites Fukuyama’s thesis of the end of history using the language of political theology. Contemporary society is viewed, following Alexandre Kojève dictum, as the world of posthistorical animals, “concentration garden” and space (rather than time) of Antichrist’s rule. This diagnosis of contemporaneity, a chance for a “generational perspective”, in Wawrzyniec Rymkiewicz’s words, develops into a more detailed discussion of theological methodology in historiography, and extends with remarks on such fundamental topics as the meaning of freedom and the chances of “leaving the twentieth century” — with its dreadful shadow of social and moral “experiments”.