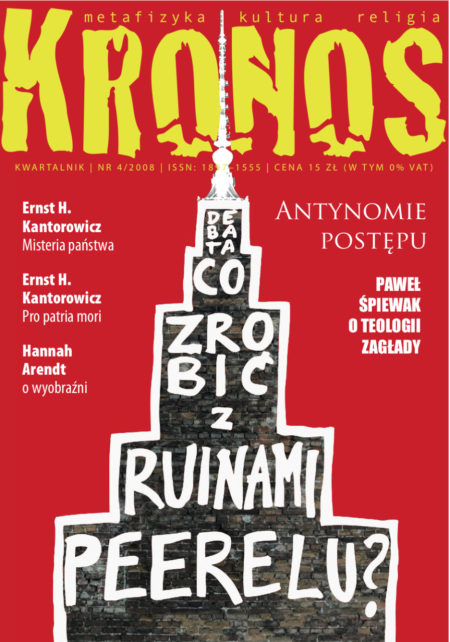 Spis treściEdytorialSummariese-book
4/2008
ANTYNOMIE POSTĘPU
Marcin Moskalewicz
The Past as a Thing of Beauty: Hannah Arendt’s Lectures on Kant’s Political Philosophy
In his article Marcin Moskalewicz analyses Hannah Arendt’s Lectures on Kant’s Political Philosophy. The author focuses on one particular aspect of Arendt’s reading of Kant, namely – the suggested parallel between the reflexive judgment of taste and judgments concerning the historical past. Moskalewicz also deals with the actor-audience hierarchy, the importance of the imagination and of the sensus communis for the power of judgment, as well as the connection between the Kantian notion of genius and Arendt’s notion of political action. Additionally, the concept of purposiveness without purpose is discussed in greater detail – Moskalewicz shows that it can be successfully applied to Arendt’s ideas about the relation between the historical past and present. This interpretation makes use of Arendt’s reflections on “storytelling”.

Krzysztof Rosiński
An Unparalleled Parallel (Hannah Arendt on imagination)
In his essay Krzysztof Rosiński discusses Hannah Arendt’s lecture on imagination in Kant’s philosophy. In response to Arendt’s claim that schematism and its function in determinant judgments is analogous to the way examples function in reflective judgments, Rosiński analyzes the specific role of transcendental schematism in the process of cognition as it is presented in the Critique of Pure Reason. According to Rosiński Arendt confuses the two levels of meaning so carefully distinguished by Kant – the transcendental and the empirical. This compromises Arendt’s attempt at establishing the groundwork of a communication theory. It is not the objective or intersubjective character of judgment which makes it communicable and hence makes political communities possible, but – Rosiński argues – the communicability of judgments is founded in transcendental feelings discussed by Kant in his third Critique… in the context of the beautiful and the sublime.

Paweł Śpiewak
Silence and Job’s questions
The article by Paweł Śpiewak is a thorough analysis of the numerous ways in which Jewish theology tried to deal with the phonomenon of the Holocaust and how these efforts led to a sometimes far-reaching revision of the message of Judaism. The most striking example of this revision is the work of Richard Rubinstein who comes to deny the existence of God in history, postulates a complete breakaway from the myth of the chosen nation and evokes a vision of secular Judaism. A similar conclusion is drawn by Hans Jonas who sketches the vision of God not as a completely perfect Absolute but as a being which becomes in time and is thus exposed – like people – to other new experiences. Likewise, Rabi Shapiro is convinced that God’s answer to the unprecedented suffering of his people is the withdrawal to “the inner chambers of heaven” so as to undergo indefinite suffering there. One can say that Job remains the key figure of the post-war Jewish theology because just like him it comes to realize that the final answer to the horror that took place during the war is a silence full of contemplation.

Karolina Wigura
Did Christ die in Auschwitz? Shoah’s Challenge to Christian Theology
The article deals with the Christian theology of the Holocaust. Karolina Wigura asks whether a single Christian-Jewish perspective on the Holocaust is possible, or whether the differences in approach between Jewish and Christian theologians are unsurmountable. Is reconciliation and forgiveness possible? How does the Jewish theology of the Shoah impact Christian thinkers? And vice versa: Can Christian interpretations be accepted by Jewish thinkers? Wigura tackles these problems by analyzing the works of Joseph Ratzinger, Jürgen Moltmann and Johann Baptist Metz. She also discusses Jewish critiques (by Richard L. Rubenstein and Emil Fackenheim) of the Christian interpretations of the Shoah. Ultimately, theologians agree that the only element which can serve to bring the two religious perspectives together is the essential core of both Judaism and Christianity – the moral obligation to bear witness to the One God.

Dariusz Czaja
Obscene Evil: Coetzee and Littell
The permanent presence of evil in human history is distressing, but real opportunity. But what is the connection between actual evil and the evil that is represented? In Elizabeth Costello, one of the most intriguing books by J. M. Coetzee, the main character, a noble and respectable writer, poses some fundamental questions about evil and literature: Why represent evil in literature at all? Should we really mirror it in fiction? Is it ethically justified? Using Paul West’s novel The Very Rich Hours of Count von Stauffenberg as an example she discusses the possible answers. Imitating this cognitive strategy Czaja analyzes the controversial book by Jonathan Littell, The Kindly Ones. The problem of mirroring evil is seen here through the eyes of Coetzee’s title character.

Michał Otorowski
Alfons van Worden and his Work
Michał Otorowski celebrates the forthcoming anniversary of the „finding” of the Saragossa Manuscript by discussing Jan Potocki’s political theosophy. Otorowski sees the “event” as real – at least in the context of the story of the Gomelez family – and treats Alfons van Worden as the actual author of the Manuscript. This approach, which defines the way the Manuscript functions in alternative history, helps better to understand Potocki’s proper intention. According to Otorowski, it consists in a philosophical attempt to envision the world in such a way as to make historiosophy’s esoteric and secretive tradition tenable. Consequently, Potocki formulates his own political theosophy which might be seen as a reinterpretation of cabalistic, lurianic messianism.

DEBATE: WHAT TO DO WITH RUINS OF THE PEOPLE’S REPUBLIC OF POLAND?
Piotr Graczyk
1964
According to the anticommunist and anti-liberal right, Polish culture of the communist era is a poison which even today, under the guise of liberalism, corrupts the people. On the other hand, anticommunist liberals believe that if anything of cultural worth was produced during the communist era, it may automatically be seen as anticommunist in its purport and anticipating the liberal values which prevailed in Poland after 1989. In his manifesto-essay Piotr Graczyk suggests that the themes running through Polish culture of the 60’s (the high point of which, according to Graczyk, was the year 1964 which saw the publication of important books by Kołakowski, Baczko, Walicki, Przybylski, Kott, Mrożek, Różewicz and others) can be used to develop an alternative left-wing perspective on communist Poland. This new stance would be neither post- nor anticommunist, but rather – following Leszek Kołakowski’s phrase – radically rationalist. Graczyk finishes his essay with an analysis of what he believes are examples of radical rationalism in Polish cinema – Andrzej Wajda’s films Lotna (1958) and Ashes and Diamonds (1965).

Mateusz Werner
The Rationalist in Wonderland
Mateusz Werner’s essay is a polemic reply to Piotr Graczyk’s 1964. The author disagrees with Graczyk’s main argument, namely – that Polish mentality is dominated by the romantic ethos of the suicidal dreamer to which the best antidote is found in the “radical rationalism” advocated by Polish intellectuals in the 60’s. Werner claims that it is impossible to develop the new, left-wing historical politics which Graczyk calls for in his attempt to vindicate the mythical period between “October” and “March” when philosophy and the arts briefly flourished in communist Poland. This – Werner argues – would mean endorsing the tyrannical violence which lay at the heart of the communist system. Therefore Werner refuses to see the film Lotna along Graczyk’s lines – as a metaphor of the salutary auto-ironic attitude towards one’s self. He also challenges Graczyk’s presentation of the philosophical tenets of the “Kołakowski group” on which the new cultural and historical self-awareness is to be modeled.

Wawrzyniec Rymkiewicz
Is the People's Republic of Poland Part of Polish History?
Wawrzyniec Rymkiewicz discusses Ryszard Legutko’s book An Essay Concerning the Polish Soul. Rymkiewicz offers a Heideggerian and Derridian interpretation of Legutko’s diagnosis of Polish history of the second half of the 20th century. Real socialism is presented as a deconstruction of historical the aim of which was to establish a permanent transitoriness of life, without a past and future. This explains why socialist architecture of the Eastern Block seem strangely evanescent. The same evanescence characterizes contemporary products of pop-culture which are disposable commodities. Rymkiewicz claims that contemporary mass society (or – mass humanity) is akin to 20th century’s totalitarian experiments. Poland, according to the author, is where this connection is particularly apparent.
Additionally, Rymkiewicz interprets Solidarity in terms of the Heideggerian Ereignis and presents Lech Wałęsa as a postmodern hero.