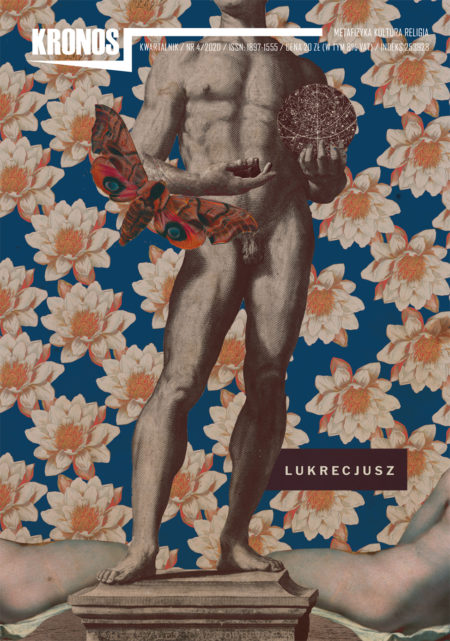 Piotr Nowak
LEO STRAUSS ON TITUS LUCRETIUS CARUS’ DE RERUM NATURA
Titus Lucretius Carus, writing in the 1st c. AD, was an amazing combination of modern philosopher and poet. His long poem outlines the world of modern people, because what makes us modern is atheism and science, to be more precise: atomistic physics. Due to the combination of atheism and scientifi c knowledge it is clear that Lucretius’ critique of religion is not just an addition. On the contrary, it is the backbone of the breathtaking structure of the entire work. Leo Strauss studied Lucretius’ long poem right after the Second World War. “I have been reading Lucretius recently,” he writes in a letter to Eric Voegelin. Strauss put away his notes on Lucretius. He would return to them twenty years later, informing Alexandre Kojève about it in the last letter he wrote to him. “If everything goes well, I shall come back to Lucretius,” he intimates. He believed that only in old age he was mature enough to study De rerum natura. At approximately the same time Kojève was working on his essay on Julian the Apostate so the two could quickly reach an agreement, especially on the question of atheism: There is no God! Certainly! Defi nitely!

Maria Chodyko
WAS LUCRETIUS’ LONG POEM INCLUDED IN INDEX LIBRORUM PROHIBITORUM?
Epicureanism has always been an elitist current and this is probably the reason why its interpretations were so ambiguous and, at the same time – so radical. Yet in the culture of the 16th c. Europe it was not the aura of scandal but an intellectual prowess and axiological intuition that were the dominant topics of debate. We can see how original they were, when we trace the ideas of the elite of catholic Europe, which included apologists and enthusiasts of Epicureanism, those who understood the terms hedone and voluptas in a manner that draws them close to Christian anthropology. Who were these thinkers? What was the Roman Inquisition’s attitude to the writings of Epicurus and his followers? Finally, are there any examples in modern literature of Christianising Epicurean philosophy or of the affi rmation of hedonism? The article aims at fi nding answers to the three questions.

Paweł Milcarek
EPICUREANISM AND NEO -EPICUREANISM: FROM APOLITICISM TO THE POLITICS OF HEDONISM
One of the terms Leo Strauss was fond of using was “political hedonism.” The author of Natural Right and History used to apply this term to the modern thought current that opposed the traditional doctrine of virtue and believed that the purpose of public institutions should be human comfort and pleasure. In Strauss’ thought the term “political hedonism” is both a cryptonym for bourgeois liberalism and a connector between the latter with materialism and the criticism of religion, practiced by modern thinkers since at least the times of Hobbes. Both this cluster of ideas and each one separately were labeled by Strauss as “Epicureanism,” and depending on the stage of his life and the issue that is being stressed, the term scintillates with different meanings. Despite many changes in Strauss’ thought, he always treated Epicureanism rather as “a cluster of heretic ideas” than an essence of Epicurus’ thought.

Krzysztof Łapiński
PLEASURE AS SPIRITUAL EXERCISE. ASCETIC ASPECTS OF EPICUREANISM
The need to curb desire is mentioned already in Epicurus’ writings. There is the famous sentence in his Letter to Idomeneus: “If you wish to make Pythocles rich, do not give him more money, but diminish his desire.” Epicurus gives equal attention to pursuing pleasure and to avoiding it; he allows pleasure while simultaneously introducing restrictions and imposing a certain regimen on a life of pleasure. The regimen of pleasure and pain is meant to help one reach and maintain self-control and inner equilibrium. Thus, the Epicurean life can be understood as askesis of sorts wherein one practices the school’s doctrine, combining the pursuit of some pleasures with relinquishing others as well as giving up those goods and goals which can threaten the Epicurean ideal of life, based on autarky and a stable state of mind. Going against the Epicurean school’s declarations found in source texts, about the easiness of attaining happiness within the Epicurean school, in the present article I am going to try to point to those aspects of Epicurean philosophising that make this ideal diffi cult to attain and practice.

Dominika Budzanowska-Weglenda
ATOMS AND MAN’S HAPPINESS. THE EPICUREAN MODEL OF THE PHYSICAL MAN
Primary pleasures, the sensual ones, i.e. those satisfying the sensual and physical needs, Epicurus divided into natural – and those were either necessary or unnecessary for happiness – and unnatural, which – having deemed them unnecessary – he rejected just like natural unnecessary needs, such as luxury or erotic excess, advocating instead abstinence and moderation. Thus, he only cared for the natural necessary pleasures; this way, he reduced the bodily pleasures necessary for happiness to satisfying hunger, thirst and the protection from cold. Secondary pleasures, the mental ones, were decidedly more important to him. Epicurus divided them in a similar manner he classifi ed sensual pleasures. Among necessary natural mental pleasures is the desire to know the truth about the world, and the willingness to gain the knowledge that liberates one from delusions and fear, giving the greatest pleasure available to man. Natural unnecessary pleasures include, feelings; Epicurus believed they should be controlled by reason so that we can avoid even the slightest trace of slavish attachment to another person. Unnatural mental pleasures, i.e. the desire for fame and honours, Epicurus classifi ed as unnecessary, and rejected them. Finally, Epicurus taught about the pleasure of a harmonious movement of soul and body atoms. It is the most appropriate pleasure; moreover, it does not require any activity: it is a state of inner painlessness and joy of existing, resulting from the awareness of life.