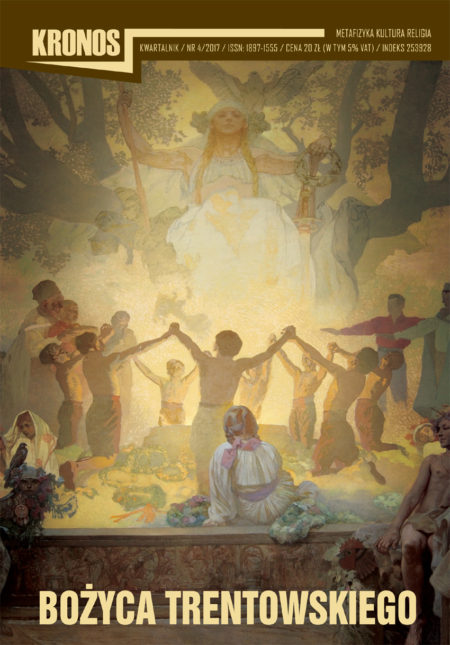 Spis treściEdytorialSummariesZAMÓWe-book
4/2017
Bożyca Trentowskiego
projekt okładki:
Alfons Mucha / Janusz Barecki
Emilia Lipiec
THE CHANGING FORTUNES OF BRONISŁAW TRENTOWSKI’S “BOŻYCA” [“THE GOD BOOK”]
Trentowski’s “The God Book”, never published in its entirety, deserves attention for at least two reasons. The first is the renown of its author: Bronisław Tretowski was, and remains, a controversial author; he was never affiliated with any political groups of his time, and often criticized their ideas and agendas. He was read by some of the greatest minds of Polish 19th century culture, arousing extreme reactions and emotions (in the case of Cyprian Kamil Norwid and Zygmunt Krasiński, for example). Some of his books, most notably “Chowanna, or the System of National Pedagogy”, continue to inspire modern conceptions of philosophical pedagogy. The other reason is Trentowski’s impact on the Polish language through his tendency to introduce in his works brilliant neologisms which were often jeered at by contemporary critics, but which in fact were permanently assimilated into Polish (words such as „sprawdzian” [“test” or “trial”] and „jaźń” [“self”]).

Stanisław Pieróg
MYSTICISM AND GNOSIS IN POLISH ROMANTIC PHILOSOPHY (MICKIEWICZ, TRENTOWSKI, LIBELT)
In the introduction to his opus magnum, “The History of Polish Literature”, the 19th -century Polish scholar, Michał Wiszniewski, referred to his times as “the age of Trentowski and Mickiewicz”. “The world of Homer and Aristotle,” he wrote, “has faded away and has no relation whatsoever to the age of Trentowski and Mickiewicz. Classical Greek and Roman literature belongs wholly to the past.” For Wiszniewski, who wrote these words in 1840, his age was defined by a cultural upheaval which put an end to the influences of classical literature and culture, and initiated the development of a genuine national culture. Trentowski and Mickiewicz were in his view the key figures in this development.

Dawid Rogacz
THE RECEPTION OF AUGUST CIESZKOWSKI’S HISTORIOSOPHY IN THE PEOPLE’S REPUBLIC OF CHINA
The belief that Polish 19th -century philosophy is antiquated and is of little interest to foreign scholars is widespread. However, August Cieszkowski’s philosophy of history has recently become the subject of lively discussion in China. Of course, the reception of Cieszkowski’s thought in the People’s Republic of China was, and most likely still is, the result of its connections with Marxism. Nevertheless, Cieszkowski’s ideas are not treated by Chinese scholars as having merely historical interest, but are seen as up -to-date philosophical propositions.

Luo Bozhong
CIESZKOWSKI’S HISTORIOSOPHY AND MARX’S COMMUNIST PHILOSOPHY OF HISTORY – A NEW APPROACH
In contrast to traditional, metaphysical philosophies of history, Marx’s philosophy of history is future -oriented and combines objectivism, pragmatism and communism. However, the pertinent question here is: How did such a conception of history come about? In what context should it be placed? The answers offered so far have not been definitive. We should therefore return to the scene of historical events and try to define anew the sources of Marx’s thought. Luo Bozhong argues that the reason Marx grounded his philosophy of history in a particular vision of the future has a lot to do with the influence Cieszkowski’s writings had on young Marx.

Krystian Pawlaczyk
THE NOTION OF HISTORICAL NATIONHOOD IN HEGEL AND CIESZKOWSKI
Autonoums philosophical reflection on history is a relatively new discipline. Only in the age of Enlightenment did it break free of the theological notions of history as governed by salvation, and moved beyond theology’s conceptual and geographic confines. In the 18th century accounts of the Far East by Jesuit priests or travelling merchants undermine traditional beliefs about the world and its history. In particular, Chinese culture, more ancient and developed than anyone supposed, complicated the biblical salvation narrative which until then offered the basic framework for understanding history.

Antoni Szwed
REASON AND FAITH IN THE PHILOSOPHY OF JOHN LOCKE – A HISTORICAL PERSPECTIVE
Locke’s ideas remain important not only to the historian of ideas, but prove instructive to anyone wishing to understand various political and cultural phenomena of the early 21st century. His thought, in fact, has much to do with what today we call ecumenism or interreligious dialogue. One of the challenges faced by the British philosopher was to identify elements common to the many, often mutually hostile religious denominations which were emerging in the 17th century.

Bronisław Świderski
FAITH IS A REBELLION: LUTHER AND KIERKEGAARD
In his essay Bronisław Świderski compares the writings of Kierkegaard and Martin Luther, and argues that both thinkers see faith as a form of rebellion against “our world”, the world which can be enjoyed by the senses, but which ultimately fails to satisfy our yearnings. Faith is a rebellion against what “the eyes, lips, and hands (...) miss”.

Tadeusz Zatorski
THE “CONVERSION” OF WINCKELMANN
Johann Joachim Winckelmann’s 1754 conversion to Catholicism turned out to be one of the most traumatic experiences in his life. Neither the time, nor the place was propitious. Later, the many conversions of the Romantics were perceived differently; they were the result of genuine spiritual struggles and deep convictions, and did not arouse suspicions of wanting to achieve material gain. The converts were treated with a certain reserve (Goethe did not conceal his animosity towards them, Heine mocked them), but at least no one suspected them of insincerity. In Winckelmann’s case his intentions were well -known: Rome was worth the mass. Even his biographer, Justi, stated that “without a doubt, it was case of selling one’s religion”.