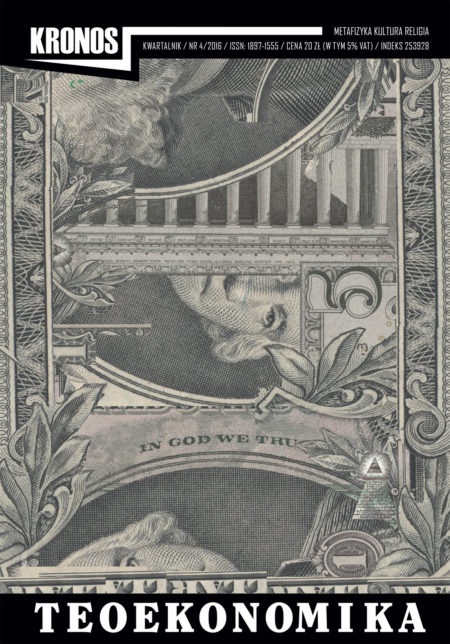 THE ECONOMIC MAN. A SELF-FULFILLING PROPHECY
In the first part of his text Bartosz Kuźniarz focuses on the idea of the homo economicus – its initial premises, repressed theological background, development, as well as its severe critique in the last decades of the XX century. This brief reconstruction leads to the central question of the essay: why, given the now obvious simplifications and deficiencies of the model, has it been used to such a great extent in descriptions and predictions of actual human behavior over the past two centuries? The answer, Kuźniarz argues, is twofold. First, the revolutionary character of much of the scientific-economic progress has lured us into a kind of attribution error or identification of actual human goals with economic motivations, whereas it has always been happiness (hidden inside the utilities of the economic model) that fueled the process. Second, the homo-economic view of human nature, once popularized, leads to a self-fulfilling prophecy that traps us in a world effectively devoid of our true beliefs as to the role and purpose of a human being.

Bartosz Kuźniarz
THEOLOGY OF ECONOMY
In this introductory essay Bartosz Kuźniarz attempts to delineate a new, interdisciplinary field of analysis he terms “theology of economy”, which he situates at the intersection of the still fairly rare investigations carried out under the aegis of “theology of economics” or “theological economics” and the even lesser pursued project of the philosophy or metaphysics of economy. Theology of economy, Kuźniarz argues, can have two meanings – roughly corresponding to the two meanings of Carl Schmitt’s political theology. On the one hand, there is the tacit (repressed) theology of economy or the supposedly positive scientific axioms and thinking patterns of modern economics. On the other, there is theology of economy as a conscious project that sees economic matters with a constant reference to ultimate questions of our existence, a problematics formerly articulated in the language of theology. It is in this second sense, claims Kuźniarz, that modern economy can be seen as the battlefield between the Christian God in human form as the unsurpassable telos of earthly life and the anti-God of economic progress for whom human beings are but temporary carriers of a universal and blind vitalism.

Marian Skrzypek
ADAM SMITH'S INVISIBLE HAND AND KARL MARX'S ALIENATED LABOR
In his essay, Marian Skrzypek asks if Adam Smith was, as an Enlightenment thinker, a philosopher, or a political economist and a theoretician of morals. Historians who study these three areas of thought give no clear answer to the above question. Those dealing with economical theory point out that while the central concept of Smith's ethical writings is sympathy, in The Wealth of Nations it is egoism. In Smith's view, therefore, what economics and ethics have in common is the fact that they are rooted in an objective natural order which manifests itself in these two spheres of human action. This is why the respective laws of political economy and ethics can function harmoniously, regardless of the subjective experience of egoism or sympathy towards others. Towards the end of his essay, Skrzypek stresses the importance of going beyond the limitations of a deistic interpretation of Smith's thought. This, he argues, can be done by looking at it from the wider perspective of Hegel's Phenomenology of Spirit.

Ivan Dimitrijević
THE POLITICAL DIMENSION OF "THE KINGDOM"
The moment of salvation, which the first eschatological communities believed to be imminent, and which was supposed to transform this world into "The Kingdom", has not yet arrived. "The Kingdom", predicted by Christ, was to come into being instantaneously, it was to have its ruler, its people and its territory. It was to be a concrete political reality, but - at the same time - not one achievable through human effort. That is why, the moment the idea of salvation was introduced, politics became unnecessary and futile. According to Sergio Quinzio, salvation, because it wasn't coming, gradually became spiritualized and at the same time politics came to be understood as a salvational practice. Quinzio argues, however, that after Christ there are only two things which can have true political significance: to prophesy the coming of "The Kingdom" and to attempt to convert others.

Daria Chibner
WRITING AS A METHOD OF EMPIRICAL PSYCHOLOGY
Daria Chibner discusses the impact of writing on Julian Ochorowicz’s psychological reflections. Writing, understood as a technology, i.e. a method facilitating the transformation of one thing into another, is a transparent tool for converting the data of consciousness into perceptual ones. Within the literary form of the diary, writing becomes the basic method of empirical psychology, enabling the constant flux of thoughts and perceptions to be ordered in accordance with rules which govern writing. The essay ends with some thoughts on the problem of the death of the author in scientific texts.

Piotr Stec
WHOSE UNIVERSITY?
Piotr Stec presents his views in relation to the recent debate on higher education reform in Poland. He critically assesses the government's plans and initiatives, all of which were dictated by the somewhat vague idea of adapting the Polish educational system to "world standards" or "European standards" whose superiority seems to have been simply taken for granted. The reformers never bothered with explaining why the changes were necessary and what exactly were they to consist in, but most importantly - they never attempted to convince those who are affected by the reform that it is being conducted in their interest.

Aleksander Nalaskowski
THE 9TH PEDAGOGICAL SYMPOSIUM: "TOWARDS A VALUABLE LIFE". CAN LIFE BE WITHOUT VALUE?
In his essay Aleksander Nalaskowski offers his reflections on the subtitle of the 9th Pedagogical Symposium organized last fall in Białystok. Despite its humanistic overtones, it masks an aggressive attitude and a suggestion that certain forms of life are devoid of value. Of course, aggression as such possesses a certain value, both for life and culture, providing we do not associate it with physical aggression only. However, the organizers of the symposium never addressed this problem: their subtitle was a mere embellishment.

Tomasz Herbich
THE PHILOSOPHICAL SIGNIFICANCE OF AUGUST CIESZKOWSKI’S ON CREDIT AND CIRCULATION
Tomasz Herbich explains how Cieszkowski's philosophical views influenced his train of thought and the main theses presented in On Credit and Circulation. Cieszkowski’s most important work in the field of economics is presented by the author as a consequence of the conclusions reached by Cieszkowski in his Prolegomena to Historiosophy where he states that philosophy should step down from the heights of theory to the plains of praxis in order to develop specific institutions whose aim it would be to encourage ever more human forms of existence. Thus, On Credit and Circulation allows us to fill in a crucial gap in Cieszkowski’s philosophy, caused by the fact that his major work, Our Father, breaks off at a point when Cieszkowski could have presented the practical consequences of his theory, especially - those relating to the organization of future societies.