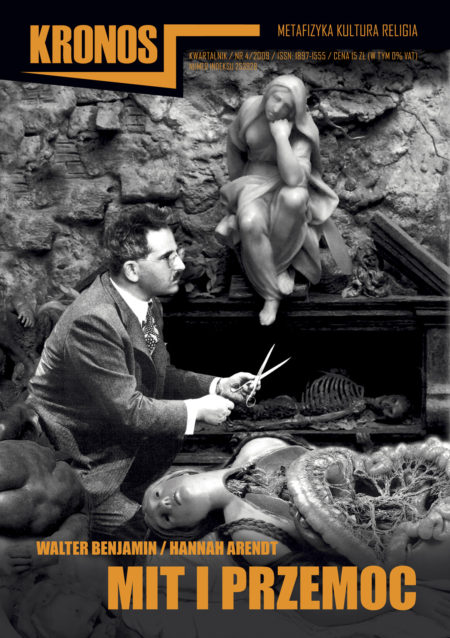 Spis treściEdytorialSummariesZAMÓWe-book
4/2009
MIT I PRZEMOC
Piotr Graczyk
Walking among Ruins – Benjamin and Mochnacki
Benjamin was a bourgeois stroller. In his interpretation early Romantic thought is like an endless stroll across the city. But when the romantic stroller starts feeling hungry, he returns for dinner to his bourgeois home – and feels guilty. And it is communism that feeds on that guilt. Mochnacki’s critical, political and philosophical reflection is an example of thought without guilt. It is thought out not by a single individual but by the nation. Mochnacki’s project assumes that Polish literature and the Polish state are elements of an endless reflection. Would it have been equally admirable had the 1831 Rising succeeded?

Adam Lipszyc
The Sober Light of Criticism: Benjamin on the Romantics
Adam Lipszyc discusses the relation between Walter Benjamin’s philosophy and German Romantic thought. In the first part of the article he reconstructs the basic elements of Benjamin’s approach to Romantic critical theory, as presented in the book Der Begriff der Kunstkritik in der deutschen Romantik. Lipszyc puts great emphasis on the notions of reflection, medium and sobriety, attempting at the same time to elucidate Benjamin’s assertion that Romantic critical theory has a “positive” character. In the second part, the author defines Benjamin’s own notion of criticism, as formulated in Benjamin’s other writings. Its most important characteristics are: the redemptive power of criticism and the “messianisation” of Romantic theory. Lipszyc focuses here on the way in which Benjamin relates Romantic thought to that of Goethe.

Agata Bielik-Robson
Leaping Across Death. Walter Benjamin as a Critic and Defender of Vitalism.
Agata Bielik-Robson discusses the problematic notion of life in Walter Benjamin’s philosophy. The author begins by quoting Derrida’s puzzling remark that Benjamin seems to be both a critic of vitalism, understood in terms of German Lebensphilosophy (philosophy of life), and a defender of a different notion of life, and thus perhaps – a different sort of vitalism. Bielik-Robson suggests that this difference is connected with the fact that Benjamin’s thought is rooted in the Jewish tradition in which the notion of life is detached from the natural “life as such” (bloßes Leben). It thus allows for the process of denaturalization. The essay examines Benjamin’s three early texts: “Critique of Violence”, “Fate and Character” and “Goethe’s Elective Affinities”, and aims at reconstructing Benjamin’s dialectical intuition which gives rise to a new philosophical concept – “messianic vitalism”.

Piotr Nowak
Hannah Arendt and the “Jewish Question”
At the beginning of his article Piotr Nowak discusses (following Hannah’s Arendt argument) the way in which prominent thinkers of the Enlightenment, such as Lessing, Mendelssohn, Dohm and Friedländer dealt with the so–called “Jewish Question”. Nowak then examines the subtle, hidden connections between Herder’s proto-romantic philosophy of history and the activity of postwar Zionists in Israel, claiming that what they have in common is the apology of assimilation. Outside their old, Jewish tradition, Zionists try to create themselves anew – whether the rest of the world accepts it or not. In the 21st century they are finally assimilated, they are “normal” – like everyone else. For the Zionists the Shoah is the moment when Jewish history proper starts.

Michał Kozłowski
Hannah Arendt: Freedom, Politics and the Specters of Marx
Hannah Arendt is considered to be one of the main critics of Marxism, and especially – the Marxist model of emancipation. It appears, however, that this critique is often misinterpreted. In fact, Arendt’s understanding of politics as collective emancipation engages in a critical, yet intimate dialogue with Marx. According to Arendt politics is a special form of praxis connecting the particular and the universal in a new formula of a community located beyond power and necessity. Even though this community is inevitably fragile, it manages to express the essence of humanity.

Andrzej Leder
Eichmann as a Symptom
Andrzej Leder considers certain elements of Eichmann’s case, described by Hannah Arendt in her famous book, as symptoms of the deep transformations taking place in European post-war culture. The author attempts to grasp Arendt’s unique intuitions by employing psychoanalytical terms. However, the subject of the analysis is not the murderer’s childhood, but the diseased Western culture itself. The disease which manifested itself in the Shoah was diagnosed also by other philosophers, for example – Adorno and Horkheimer. All those diagnoses are characterized by the same attitude and intention. They use the Shoah to criticize modernity. Leder claims that Hannah Arendt’s intuition in this respect is quite different., although it is not fully expressed in the book about Eichmann. It seems that psychoanalysis, which is capable of penetrating the hidden recesses of thinking, allows us to clarify that which Arendt sensed but which she did not try to conceptualize.

Andrzej Kołakowski
Economy and the Crisis of Culture. Polish economical thought of the 1920s in search of the “third way”.
On the example of four different theories Andrzej Kołakowski presents how Polish economists of the 1920s attempted to define the “third way” between the extremities of capitalist free trade and communist totalitarianism. The theories considered are those of: Antoni Kostanecki who focused on the tensions between individualism and collectivism; Feliks Młynarski who was interested in the clash between democracy and totalitarianism; Adam Krzyżanowski who compared liberalism and totalitarianism; and Stanisław Grabski whose thought oscillated between nationalism and statism. All of these writers look for an optimal model of organizing the Polish society suspended between, on the one hand, American-style capitalism and, on the other, Soviet communism and fascist corporationism. Although they do not propose any specific economical solutions, their work can be seen as a form of axiological demand for a social ideal and a vision of culture which in times of crisis are necessary in order to reasonably organize the economical sphere.