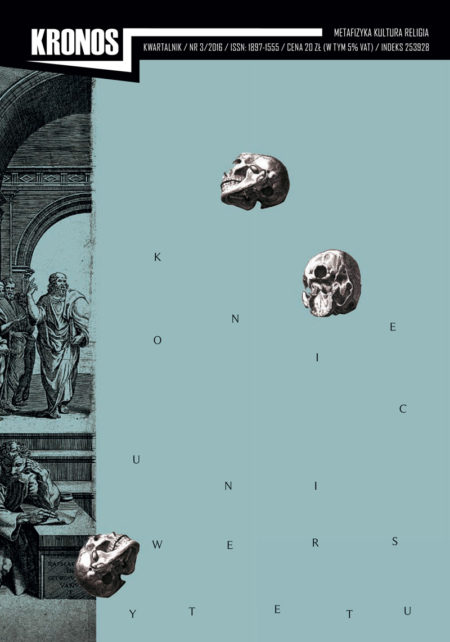 Spis treściEdytorialSummariesZAMÓWe-book
3/2016
KONIEC UNIWERSYTETU
projekt okładki:
Tomasz Bardamu
Piotr Nowak
"LEFT, MARCH!" THE 1968 REVOLT IN THE LETTERS OF HERBERT MARCUSE AND THEODOR W. ADORNO
Knowledge about the world has lost its value, truth has ceased to interest anyone and is quickly being forgotten. Students are expected to assimilate useless facts only to discard them later when they begin their professional careers. What then should the University teach if the transmission of knowledge has become a futile, carelessly conducted process? Friendship, says Horkheimer. And dialogue, with those who want it, but also those who are gone but have left behind them vibrant thoughts. "For if there is anything which cannot be systematically organized, it is friendship", especially friendship which unsettles strong identities, which stirs up fire in things long dead and cold.

Zbigniew Osiński
DISCUSSIONS ABOUT THE POLISH ACADEMIA FROM THE PERSPECTIVE OF A SKEPTICAL, DIGITAL HUMANIST AND TEACHER
Regardless of the ultimate model which science and higher learning is to follow in Poland, whether it will be more traditional or based on American solutions, focused on intellectual development or the needs of the job market, the Polish scientific and academic community first has to deal with a number of problems in order to ensure the proper functioning of the system. Above all, reforms, whatever their nature, must be preceded by a methodical analysis of the current state of science and quality of teaching in Poland. This will reveal the most important predicaments of the system. All legal and organizational solutions must take into account the actual drawbacks and advantages of Polish universities, the differences between various disciplines, as well as distinctly Polish social and economic factors. If we insist that universities should both conduct scientific research and educate, it is also necessary to implement two paths of career development for university employees with separate systems of evaluation and promotion. And finally, whoever thinks of improving the quality of Polish science and higher education without inculcating significant expenses should stop deluding himself.

Filip Mazurkiewicz
THE HISTORY OF LITERATURE AS OUTSOURCING
The current system of grants, or in fact - any such system, implicitly questions the capability of Polish universities to independently conduct research. This works both ways: from the outside, by the very existence of the system; and from the inside, by all those who decide to apply for a grant. The University, undermined from without and within, ceases to be a community of teachers and students, whose passion is the acquisition and sharing of knowledge, and becomes an amorphous group of academics whose scientific activity is a form of outsourcing conducted in the no man's land between the university and the system.

Jan Cieśliński
THE CONSEQUENCES OF THE CURRENT SYSTEM OF FINANCING POLISH UNIVERSITIES
Why is the scientific and educational quality of Polish universities plummeting? Why are the achievements of so many Polish academics unimpressive? And most importantly, why has the level of higher education decreased? There are different diagnoses of this situation, different answers are proposed, but in my opinion the fault lies with the system of financing the Polish academy. It so fails to motivate, it fails to increase the quality of science and teaching to such an extent that it would indeed be surprising if the general effect was better than it actually is. Stefan Kisielewski's well‑known saying is particularly apt here: "it's not a crisis, it's a result".

Piotr Skalski, Bartosz Wójcik
MEILLASSOUX'S CRYPTOLOGY
The work of Meillassoux is best understood as an attempt to create a new materialistic philosophy, "speculative materialism". Piotr Skalski and Bartosz Wójcik examine the basic tenets of this project from a dialectical perspective in the belief that every materialism has to be dialectical. The authors point out that despite its avowed anti-dialectical character, Meillassoux's project contains a semblance of the dialectical element, rooted in the notion of contingency. Therefore, the proposed reading oscillates between the openly anti-dialectical side of Meillassoux's theory and the pseudodialectical moment located within its basic tenets.

Paweł Dybel
ROMAN MARKUSZEWICZ'S REVISION OF FREUD
Paweł Dybel considers the socio-political dimension of Roman Markuszewicz's project of "revising" Freud's theory. He sees it as an attempt to work out a version of psychoanalysis which in its therapeutic practice would be aimed against the increasing "dictatorial" tendencies within European societies. This, according to Markuszewicz, would ensure spiritual emancipation and the reclaiming of the self both for the individual and the group. In the 1930s and during the Second World War this approach seemed entirely utopian. However, Paweł Dybel points to a number of similarities between the version of psychoanalysis proposed by Markuszewicz and the later tradition of ego psychology (Heinz Hartman), the psychology of the self (Heinz Kohut) and the theory of conflict (Charles Brenner).