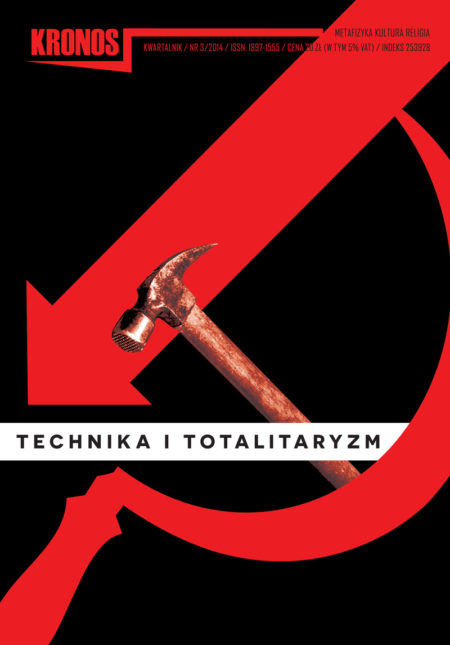 Wojciech Kunicki reconstructs the process behind the composition of Friedrich Georg Jünger’s treatise The Perfection of Technology (1946). This reconstruction is based on the unpublished correspondence (held in the Deutsches Literaturarchiv Marbach am Neckar) between Friedrich Georg Jünger and his brother Ernst in the years 1939–1944. The main thesis of the article is that until 1939 Friedrich Georg Jünger’s attitude towards technology was ambivalent, as was the case with most national revolutionaries, but that after the experiences of World War II the writer started vehemently to oppose and reject technology as such. Dehumanization is perceived by him as a direct consequence of technological progress and technological organization of societies.

Krzysztof Tyszka-Drozdowski
TECHNOLOGY AND THE HUMAN DETRITUS
Friedrich Kittler’s philosophy of technology, based on French antihumanism, continues in a creative way the German tradition of investigating the phenomenon of technology. If Heidegger was the philosopher of the atomic power plant, then Kittler is the philosopher of the Silicon Valley. Kittler’s thought – much inspired by Foucault’s and Virilio’s analyses – may be seen as a development of Ernst Kapp’s idea that technology is a tool which enhances the workings of human organs and powers, or else – that it is a prosthetic limb which helps man to survive in the world and to control it. From these premises Kittler draws unexpected conclusions: through technology man did not enhance his powers but was in fact deprived of them. Since that which distinguished man is no longer his because technology can replicate human action and thought on a much more advanced level, is there anything that remains of the human? This is the crucial question Kittler’s philosophy poses.

Marcin Rychter
WIZARDS AND PLUMBERS: NEW MUSIC AND NEW TECHNOLOGY
Marcin Rychter discusses the impact of technology on culture by taking a closer look at the changes which occurred in the European musical tradition of the 20th century. Music abandoned the formal canon which defined the limits of “musicality.” Contemporary sonoristic compositions are often devoid of rhythm, melody and harmony, nevertheless they are created, performed and listened to as music. The fact that composers became interested in the pure timbre of sound is no doubt connected with the popularization of mechanical and later electronic devices for registering, generating and transforming sound. Contemporary musical culture is therefore an artistic -technological hybrid; the ultimate character of the works of art it produces is determined equally by the ideas of the composers and by the technological and material conditions. That is why in its description it is useful to reintroduce K. Twardowski’s notion of “the psycho -physical artefact.” The final stage in the development of music -creating machines is the introduction of the computer as a “meta- -tool” of theoretically unlimited potential, a tool which enables the composer to create virtual appliances for the material transformation of sound. The computer made it possible for the composer to envisage entirely new aims for music, unimaginable and unreachable when using traditional instruments and when composing “on paper.” Their most original achievements are innovative not only artistically but also ontologically – they introduce new, previously unattainable forms of organization at the deepest level of sound structure (granural synthesis, spectralism).

Krzysztof Okopień
A BRIDGE ON THE BUG RIVER: TWO TOTALITARIANISMS
The word “totalitarianism” involves two things: totality and evil. The first element is obvious and readily understandable to anyone who knows Latin; the second seems hidden, but in fact – to anyone who knows history – it is far more evident than the first. The word “totalitarianism” prompts us to enquire about the relationship between totality and evil; about the extent to which the first can be the second, and vice versa. Such an enquiry, however, forces us to confront philosophy’s main concern, for only philosophy deals with totality in the strict sense of the word, i.e. with totality which includes the very process of dealing with it and expressing it. Totality is philosophy’s concern not because it is that which is “general” or that which is “a priori.” Totality is philosophy’s concern because totality is its subject. As long as this totality was called, after Plato, “the Good,” everything, including thinking, was in its right place. But everything changed when in the 20th century a suspicion arose that this totality should perhaps be called evil. For in such a case should not evil be allowed to speak?

Anna Dziedzic
AGNOSTICISM AND THEODICY: MARIAN MASSONIUS IN CORRESPONDENCE WITH MARIAN ZDZIECHOWSKI
In 1934 Marian Massonius and Marian Zdziechowski wrote to each other on the topic of theodicy. The starting point of this correspondence was Zdziechowski’s confession to Massonius about his loss of “inner faith.” He could not, he said, reconcile God’s omnipotence and goodness with the scope of earthly suffering and evil, as well as with the prospect of eternal damnation in hell. Massonius suggested to Zdziechowski to consider certain arguments – inspired by the thought of Kant – which sustained his own belief in God’s omnipotence and goodness. The first of these arguments was drawn from neocritical philosophy (which Massonius had defended since the 1890s). It accepted the inability of the human mind to know “the thing in itself” and limited the task of philosophy to a critique of knowledge and theory of science, protecting at the same time religious belief against the usurpations of science. Additionally, Massionius supplemented Kantian agnosticism with the theses of du Bois -Reymond (“ignorabimus”) and those elements of Spencer’s agnosticism which pointed to indelible contradictions within our basic concepts. Neocriticism enabled Massonius to treat the problem of theodicy as rationally ungraspable and to become reconciled to the world’s ultimate mysteriousness, not only within the realm of religion but also that of science. The second of Massonius’s arguments was based on the idea of man’s moral autonomy which enabled him to recognize Christ as the “good God” and to affirm the infallibility of the Roman Catholic Church and its central dogma of Divine omnipotence and goodness.

Kamil Maria Wielecki
THE TRANSFORMATION OF ZINOVIEV
The article analyzes the surprising transformation of Alexander Zinoviev. Because of his critique of the communist system this well -known Soviet logician was forced to emigrate. Abroad, he published the novel Homo sovieticus which brought him fame and introduced the titular notion into common usage. The Soviet man was, according to Zinoviev, a caricature of the prototype created by Soviet propaganda. Living in the conditions of real socialism – and not of socialism as described by various ideologues – the Soviet man became an egoist and a conformist whose sole aim was to advance himself in the social hierarchy. However, after the collapse of the Soviet Union, Zinoviev started ardently to defend the previous system. He wrote apologies of Stalinism and declared Soviet communism to have been the best social order in the history of humanity, while denouncing post -Soviet Russia as a degenerate country. Kamil Maria Wielecki presents the main elements of Zinoviev’s thought – both early and late – and describes its evolution in relation to historical events. Zinoviev was a man of the West who found himself trapped in Soviet Russia, but while living in the West and later in post -Soviet Russia he was transformed into a man of the East.