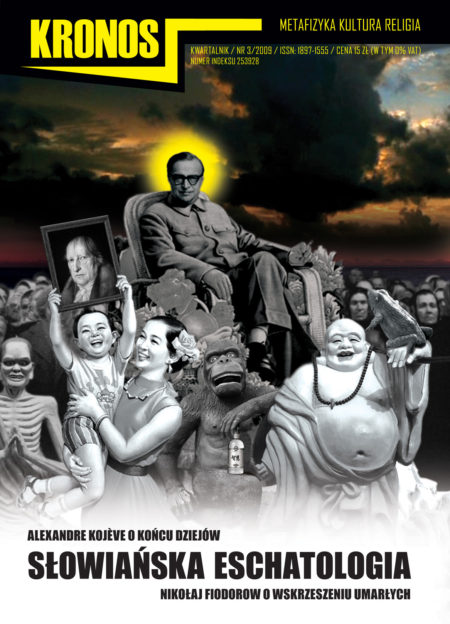 Spis treściEdytorialSummariesZAMÓWe-book
3/2009
SŁOWIAŃSKA ESCHATOLOGIA
Michał Milczarek
We Shall Resurrect You. The Philosophy of Nikolai Fyodorov
The article aims at presenting the main ideas of the Russian philosopher Nikolai Fyodorov. Michał Milczarek first presents Fyodorov’s vision of nature as the realm of death, unconsciousness and amorality; next – he discusses Fyodorov’s main idea of conquering death and resurrecting all our forebears. Milczarek focuses on the Russian philosopher’s notion of “the common deed” which is to be realized through a transformation of the human mind which comes to control nature and the whole of the universe. The condition of this transformation is a complete unification of mankind which endows history with meaning. The author also discusses the religious aspects of Fyodorov’s thought in the context of Russian cosmism and religious renaissance, as well as his impact on Russian literature.

Piotr Nowak
Introduction to the Reading of Kojève
In his article Piotr Nowak presents the turning points of Kojève’s biography – his escape from Russia and early friendship with Alexandre Koyrè, the Paris seminar he conducted in the 1930s and his political activity in the 1950s and 1960s – showing how they are related to the development of his work. Nowak then describes the basic notions of Kojève’s interpretation of Hegel’s “Master-Slave dialectic”, “homogeneous and universal State”, “time”, “Latin Empire”, “the end of history”, “recognition”, “tyranny” – an interpretation almost indistinguishable from Heidegger’s. The notion of tyranny gives Nowak the opportunity to discuss some aspects of the quarrel between Kojève and Leo Strauss. What truly divides both thinkers is their approach to political oppression, especially to tyranny. For Strauss, whether tyranny is “enlightened”, “benevolent” or “wild” it is simply unacceptable (as a social phenomenon). Those who support any form of political oppression, especially intellectuals, are not only immoral but stupid. Kojève does not agree. Tyranny – he claims – is not only good but necessary in some moments of historical development. If the philosopher does not want to drown in a “cloister” stagnation or choose the life of a mad recluse, he has to strive against the world and force on it his own thoughts. There is only one criterion of philosophical truth – successful implementation of ideas. In the last section of his article Nowak presents the development of Kojève’s ideas by his French and American students.

Piotr Nowak
Galilee, vicisti!
Piotr Nowak begins his essay on Kojève’s reading of Julian the Apostate with a description of the quarrel between the Ancients and the Moderns. He then explains the meaning of exoteric vs. esoteric readings of texts as a method of dealing with the Great Books which shows that we (Moderns) are always “superior to the inferior and inferior to the superior, but never equal them”. Kojève disagrees with this. We are better and superior than the Ancients – we know more and better, he claims. The esoteric meaning of Julian’s works is a deep, uncompromised atheism and it is precisely this knowledge that we should glean from them. In the next section of his article Nowak reconstructs the historical context of the peculiar life of the last of the gentiles. In the fi nal section he discusses the Russian background of Kojève’s fascination with Julian, namely – Dmitry Merezhkovsky’s novel “Julian the Apostate” which Kojève read in his youth.

Tomasz Kozak
A Semblance of the Sublime. Between History and Post-History
The space between history and post-history is one in which two dreams of late modernity intermingle. The first is the desire to end history understood (in a Hegelian fashion) as “a slaughterhouse”. The second is the need to transcend the limits of liberal democracy understood (in a Nietzschean fashion) as a sphere deprived of the tragic element. Both these fantasies define the paradoxical nature of modernity – ahistorical and yet yearning for history; safe but dreaming of danger. In the dialectical interplay of these fantasies the energy of the sublime plays an important role. Ecstatic and anti-democratic sublimity is one of the key antitheses through which late modernity redefines its notions of history and democracy.

Piotr Graczyk
The Three Spheres of Emancipation
Stanisław Brzozowski’s thought should be viewed from the perspective of 19th century “antimetaphysical metaphysics” – a transcendentalism undermined by historicism. Its key category is “emancipation” – a secular form of Christian “salvation”, understood as the appropriation by man of the world which he himself creates. Brzozowski gives three different interpretations of what he means by man-created reality. First of all (in his early writings) Brzozowski interprets it as labor; later – as speech; and finally (in his later works) as “the quotidian”. The first of these includes the whole of humanity; the
second – the nation; and the last – the individual soul. “Emancipation” thus acquires three different aspects – socialist (after Marx), nationalist (after Sorel) and Christian (after Newman). The resulting clashes and similarities between these three interpretations determine the tensions and ambiguities of Brzozowski’s thought, the Polish “master of suspicions”.

Stanisław Brzozowski
John Henry Newman
Stanisław Brzozowski’s letters of 1909 reveal that he had been working on a selection of Newman’s writings to be published in the Sympozjon series edited by Leopold Staff. Although at first Brzozowski was not enthusiastic about the English cardinal’s writings, he soon came to admire Newman. Brzozowski’s two unfi nished essays about Newman testify to his changing views on Roman Catolicism – from ardent criticism to accepting its principles.