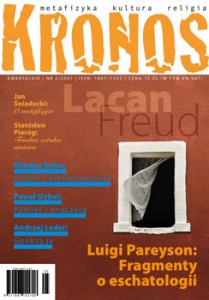 Spis treściEdytorialSummariese-book
2/2007
LACAN / FREUD
Paweł Dybel
Memory and the Signifier: Lacan’s & Derrida’s reading of Freud’s Entwurf einer Psychologie
The article takes a closer look at the way in which Lacan and Derrida reinterpret an early work by Freud — Project of Scientific Psychology. After it had been published in the Collected Writings it became enormously popular and prompted many commentaries and interpretations. Lacan and Derrida find in it many interesting ideas on the functioning of the “psychic apparatus” which imply that the latter divides into three autonomous psychic systems: consciousness, preconsciousness and unconscious. At the same time they recognize in it — each in his own way — the concept of the genealogy of language which, although it has been formulated in the mechanistic terminology of medical sciences, is nonetheless in many respects similar to de Saussure’s structuralist theory of language. According to these reinterpretations Freud appears in the Project as an involuntary forerunner of the linguistic tradition in which language has been conceived of as an open system of differences between signifiers.

Andrzej Leder
Ego at the crossroads of relations, or how the subject follows its own genesis
In my text I will try to analyze some consequences of the Freudian thesis that the conflict of Eros and Thanatos can never be settled. I will try to show, that the consequence of this is a special understanding of the human condition; a human being exists as long as each of the two drives (each of the two dimensions of human existence), strives towards its own goal, but is always constrained by its opposite. This mutual relation has to constitute a space of balance, which — for Freud, and any psychoanalyst — is the only reality conditioning the Ego.

Lena Magnone
A Submitted Subject — the Frankfurt School vs. Lacanian psychoanalysis
In the article I attempt to present an interpretation of the submitted subject given by Lacan, and to show in what way it differs from the Frankfurt School approach. Adorno and his followers mainly studied the so–called authoritarian personality. Žižek, using Lacanian psychoanalysis, proposes to consider excessive obedience, whose epitome is Eichmann, in terms of jouissance. Both theories apply to totalitarian conditions and (post)liberal democracy.

Michał Herer
Theory of Affects as Ethics
The article exposes a strictly ethical dimension of Spinoza’s thought, accounted for by his theory of affects and his radical conception of body. The fundamental question here concerns freedom, our becoming free through and due to suitable affective strategies. Affects do not always presuppose passivity, i.e. our being conditioned by external circumstances. To the contrary — they become, in their own right, conditions for free action grounded in internal necessity. These affects carry a great subversive political potential.

Maciej A. Sosnowski
The Story of an Aesthete: Remarks on Tolstoy’s Anna Karenina in the light of Kierkegaard’s Either/Or
I attempt to show in this paper the similarities between two classical works — S. Kierkegaard’s “Either/Or” and L. Tolstoy’s “Anna Karenina”. In part one I describe the post–Hegelian universe of aesthetic personality, created by the Danish philosopher. His conception of “immediate” love as desire and melancholy is evidently close to the worldview of one of Tolstoy’s protagonists, whose story is interpreted in the second part of my text. The point of this comparison is that Tolstoy’s ideas of love and structures of Kierkegaard’s philosophy could work together effectively and illuminate one another.

Tomasz Stawiszyński
Love and Mirrors: On Lawrence Durrell’s The Alexandria Quartet
In this article I tried to examine the idea of love in Lawrence Durrell’s The Alexandria Quartet. I followed four theoretical contexts — gnosis, C. G. Jung’s analytical psychology, J. Hillman’s archetypal psychology and Karen Horney’s idea of neurotic personality. I wanted to show that in Durrell’s work we find many perspectives and auto–interpretations — this richness is a part of the author’s belief that any event may be experienced in many different ways none of which is absolutely adequate. The question of love in The Alexandria Quartet is also very differentiated. It may be the gnostic nostalgia but also the neurotic narcissism. My conclusion is that — in fact — it is impossible to formulate any adequate conclusion about Durrell’s novel.

Stanisław Pieróg
The Difficult Art of Restraint: Jan Śniadecki’s Conception of Philosophy
The article presents Jan Śniadecki’s views on the nature of philosophy. Śniadecki (1756–1830) was a Polish mathematician, astronomer and philosopher of the Enlightenment. Śniadecki claims that the main task of philosophy is the investigation of the cognitive capacities of the human mind and the creation of a system of rational belief. This system is governed not by metaphysical propositions, which according to Śniadecki have no cognitive value, but by “rational beliefs”, which are defined as fundamental convictions, the rejection of which must lead to radical skepticism and pessimism. “Rational beliefs” cannot be proved: they are the silently accepted assumptions of all human thinking. For the same reason, they do not have to be proved. Śniadecki engages in a bold polemic with Kant’s “critical” philosophy and seeks his allies amongst the Scottish philosophers of the common sense.