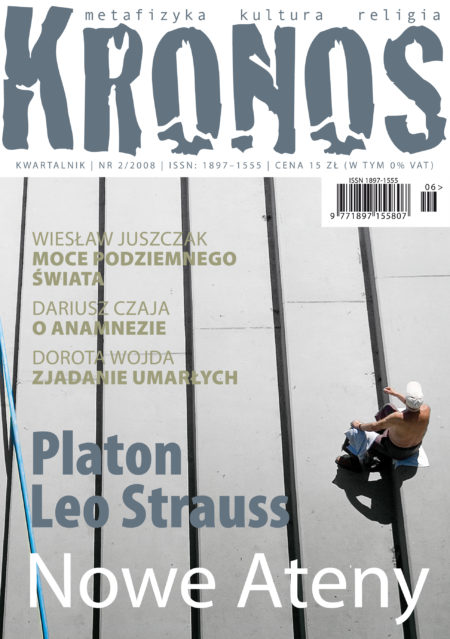 Spis treściEdytorialSummariese-book
2/2008
NOWE ATENY
Piotr Nowak
On youth, old age and their mixture (some remarks on Plato’s Philebus)
In his article Piotr Nowak discusses the basic notions of the late, “Aristotelian” philosophy of Plato’s Philebus: appeiron as elementary chaos (youth, pleasure); peras i.e. measure, limit as old age (reason); meikton, the mixture of both categories as life, mixed existence and finally — aitia (nous) as the final cause which brings out the necessary limits in the unlimited appeiron (nothingness, chaos). Then the author places Plato’s dialogue in the context of the 10th book of Aristotle’s Nicomachean Ethics — unsurpassable commentary to Philebus — stressing the practical dimension of Greek Philosophy.

Wiesław Juszczak
The Powers of the Underworld
We tend to associate Greek religion with Homer and Hesiod, with their anthropomorphic pantheon of Olympic gods. In his essay Wiesław Juszczak shows another and more primordial strand of Greek religiousness. The author argues that Homeric epics, far from being the source of Greek mythology, should be seen rather as a passing symptom of migrational turmoil. Different ethnic groups, at the moment of their arrival in Greece, had been uprooted form their previous lands. Consequently, their religiousness was losing touch with the dark and heavy (chthonic) underworld of their dead ancestors, and moving into the clear and cheerful (uranic) realm of heaven. That transition is made evident by the change in funeral rites which fairly quickly evolved from inhumation to cremation. The Homeric and Olympic religion had lasted only until the “new Greek peoples” became deeply rooted in the Greek soil. Around the time of Plato the chthonic underworld opens its gates again. What until then was repressed and could be only vaguely sensed or traced (as in Juszczak’s essay) in forgotten etymologies and between the lines of great epics, now finds its more direct manifestations in the emergent tragedy.

Krzysztof Bielawski
The Derveni Papyrus. The most important philological discovery of the 20th century
The essay is a monographic introduction to the Derveni Papyrus — a document discovered in 1962 at an ancient necropolis near Thessaloniki, dating back to 4th century BC. The Papyrus contains an allegorical commentary to an Orphic cosmological treatise. Krzysztof Bielawski discusses the problem of dating the text and of ascertaining its authorship; he also extensively comments on the text’s structure and possible function. The essay includes some critical remarks on the new interpretation of the Derveni Papyrus as a text about mystical initiation into Orphism; it also discusses the possible meaning of the document as a hieros logos.

Monika Milewska
The Divine Masquerades of Emperor Caligula
In the famous play by Albert Camus, Caligula, there is a scene in which the emperor Gaius dances on the stage wearing a costume of Venus. This scene was not invented by the playwright. The ancient sources (Suetonius, Seneca, Filon of Alexandria, Casius Dio) abound in descriptions of Caligula’s divine masquerades. Monika Milewska tries to find the explanation of Caligula’s extravagant behaviour. There are many possible answers: from political ones (Caligula, who did not want to be merely primus inter pares, dons the dress of Jupiter to differ from the hated senators) to the most banal (he was simply a transvestite); there is also the psychoanalytical explanation (young Gaius wanted to hide his ego) and the philosophical one presented by Camus. The author also tries to indicate what in fact was extravagant in Caligula’s behaviour and what belonged to the normal practice and political custom of his time.

Ireneusz Kania
An Interpretation of Certain Buddhist Terms (part III & IV)
The article is a continuation of Ireneusz Kania’s analysis of key Buddhist terms presented in “Kronos” 1/2008. This time Kania fouses on the concepts of dharma and manas, tracing the evolution of their meaning in the Upanishads and ancient Buddhist texts. Kania not only points to the difficulties involved in translation, but also questions the very possibility of rendering the complexity of certain Buddhist terms in European languages. Starting with this predicament, Kania nevertheless shows how the translator — despite the inherent difficulties — can approximate the true meaning of the Sanskrit original. First, the original term should be compared with the way it was traditionally translated in various European languages. The translator’s subsequent task is to trace the evolution of the term in question in the most important Buddhist texts. In other words, Kania claims that only by gaining an in–depth knowledge of the entire Buddhist thought and tradition can we hope to understand some of its key concepts. This is precisely what Kania attempts in his essay in reference to the concepts of darma and manas. Although ultimately he does not provide the reader with “the best” translation, he invites her to make the hermeneutical effort at grasping the purport of the Buddhist terms.

Tomasz Rosiński
The Future of Christianity
Is Christianity passé? Today the answer is usually “yes”. In a world dominated by technological and scientific expansion, epistemological pragmatism and relativism, the Galilean’s teachings seem a relic of the past. However, one of the recent historiosophical claims is that modernity, and even late modernity, is inscribed in the logic of Christianity. And not so much as the specter of the Antichrist, but a more or less successful fulfillment of the Gospel. This perspective is elucidated by Tomasz Rosiński in his essay concerning the future of Christianity.

Dorota Wojda
“Devouring the Dead”: Literary tradition according to Jarosław Marek Rymkiewicz
The essay discusses literary tradition as presented by Jarosław Marek Rymkiewicz, especially the doctrine formulated in Czym jest klasycyzm (1967) and its exemplary development in Rymkiewicz’s play Porwanie Europy (1971). The main argument is that Rymkiewicz advocates a radical hermeneutics in which two contradictory orders overlap: the dialogical one (where what matters is the search for meaning, understanding, approaching the past) and the agonistic one (in which meaning is questioned, misunderstanding prevails, and reading inventively alters the text). “Devouring the Dead”, a metaphor motivated by the incorporating phantasm, suggests that in Rymkiewicz’s writing texts are assimilated through the affirmation of their differences. Rymkiewicz’s idea of literary tradition is also juxtaposed with other standpoints (Polish structuralists, T. S. Eliot, M. Bachtin, J. Derrida, R. Barthes, H. Bloom).

Dariusz Czaja
Anamnesis and Melancholy
The essay is an interpretative hypothesis of Austerlitz, the last novel by the eminent German author W. G. Sebald. Dariusz Czaja emphasizes the unique structure of the novel: lack of paragraphing, the blending of fact and fiction, and the inclusion of photographs which constitute an inherent part of the work. Jacques Austerlitz, the title character (a Jew saved from the Holocaust) cannot cope with the horrors of the past. Sebald analyzes the consequences of post–holocaust trauma in European culture. Czaja suggests that melancholy (as opposed to mourning in the classical Freudian distinction) is the most adequate reaction to the horror of the Holocaust.

An Editorial Debate: The Virtue of Perfection, or — Do we need Greek political philosophy?
Piotr Nowak and Janusz Ostrowski (members of the editorial staff of “Kronos”) and invited guests: Maria Dzielska and Paweł Śpiewak discussed the contemporary relevance of classical Greek philosophy. Several issues were touched upon, among them — the continuity (or lack of continuity) of ancient philosophical concepts in contemporary philosophy, “active” desinteressement of the Warsaw School of Historicists of Ideas in relation to the Greek tradition, the relation between Greek philosophy and the Christian tradition, etc. Much of the discussion focused on the notion of perfection and the perfect life as understood by the Greeks. The interlocutors saw perfection mainly as a political project. Hence, they also addressed the question of whether the concepts developed by ancient Greek philosophers can be employed to describe (or re–describe) present political life.

Anna Dziedzic
Pawlicki on Heraclitus of Ephesus
Stefan Pawlicki (1839–1916), a classicist, philosopher and Roman Catholic priest, dedicates one chapter of his History of Greek Philosophy to Heraclitus. He not only summarizes Heraclitus’s thought, but also evaluates it from the point of view of Christianity. He criticizes the notion that “all things are one”, and contrasts it with the anthropocentric and soul–oriented philosophy of Socrates. Pawlicki believes that Heraclitus created the pantheistic paradigm — a fundamentally false although historically tenacious paradigm. It also, under different guises, dominated 19th century philosophical thought: from Schelling and Hegel, to Marx’s materialism, Haeckel’s monism, Darwinism and socialism. Pantheism, Pawlicki believes, poses a threat to western civilization, built on the belief that God created free, morally responsible persons. Pawlicki expounds Heraclitus’s thought and simultaneously attempts to win readers over.