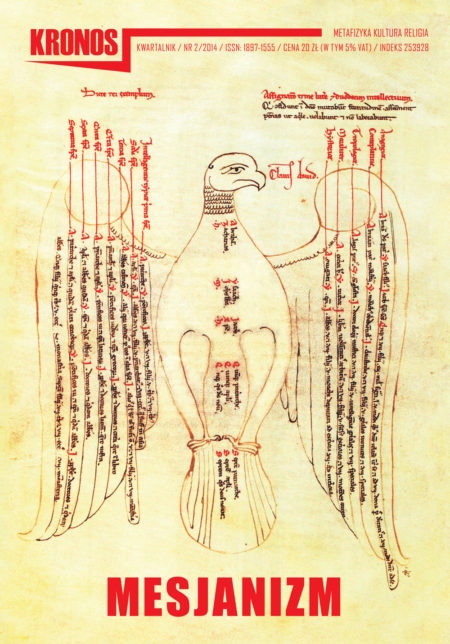 Spis treściEdytorialSummariesZAMÓWe-book
2/2014
MESJANIZM
Rafał Tichy
FROM HERMENEUTICS TO HISTORIOSOPHY
Karl Löwith saw a connection between the totalitarian projects of the 20th century, whether fascist or communist, and the breakthrough in historical thinking which had occurred some five hundred years before and which had been inspired by the ideas of Joachim of Fiore. Joachim, however, was not a social or political revolutionary, but a Medieval monk who wanted to resuscitate the Christian ideal of communal life in order to prepare the world for the Second Coming. The stir he later caused in philosophy of history was due to his biblical commentaries. Behind the Franciscan movement of the Spirituals, behind the apocalyptic revival of the late Middle Ages, behind the modern historiosophies which indirectly referred to Joachim’s thought and gave rise to various social movements, there stood a change in interpreting biblical allegories. Joachim had insisted that the Bible, or rather – the History of the Word hidden in it, was a latent force which – triggered by adequate hermeneutics – could at any moment shake the foundations of history.

Jan Grzeszczak
MEDIEVAL POLITICS: A THEOLOGICAL PERSPECTIVE
The article discusses the theological message of two diagrams – Rome and Babylon – presented in Liber Figurarum, a 13th century pictorial synthesis of the thought of the Calabrian abbot Joachim of Fiore. The tree -shaped diagrams illustrate Joachim’s understanding of history, akin to St. Augustine’s conception as presented in The City of God. For Joachim history evolves according to the dialectic of self -pride and humbleness, fall and redemption. These ideas are expressed in a slim volume titled Intelligentia super calathis in which Joachim discusses the vision of the two baskets of figs in Jeremy 24. Just as the Jews accepted the purifying exile into Babylon, so the papacy in the 1180s should – according to Joachim – accept the scourge of New Babylon, i.e. Frederick Barbarossa’s empire.

Piotr Napiwodzki
MODERNITY AS THE TRIUMPH OF JOACHINISM
Medieval heterodox movements inspired by the teachings of Joachim of Fiore have fascinated many historians. Fiore’s ideas, however, should not be relegated to the past; their contemporary influence is far from marginal. Piotr Napiwodzki sees Joachinian ideas as a dominant element in the intellectual landscape of modernity. He points to such spheres within the Church and society in which Joachinism, more or less camoufl aged, is still very much alive.

Paweł Grad
IN THE NAME OF THE FATHER. A THOMISTIC CRITIQUE OF JOACHINISM
A Thomistic critique of the ideas of Joachim of Fiore may be seen as a theological expression of the debate concerning the legitimacy of modernity. Paweł Grad argues that the Thomistic theology of the Holy Trinity precludes the Joachinian vision of history as divided into three ages. In St. Thomas’ theology the Holy Spirit comes from the Father and the Son, and hence it cannot come after the Son, as if mimicking the Son coming from the Father. The author states that from the Thomistic perspective the proper order of the historical process reflects only the relation between the Father and the Son, i.e. the notion of generatio. St. Thomas’ trinitarian theology permits only one model of history, namely – tradition. Theology of history is not the exclusive domain of post -Joachinian historiosophy: there is also the rival, traditionalistic theology of the saeculum.

Piotr Graczyk
ERNST BLOCH AND THE TWO MYTHS OF ANTHROPOGENESIS
If human genesis is connected with original sin, man is an animal marked by deficiency and that which defines human species is work as a means of equalizing sin. If, however, humanity originated in Eden, man is defined by a surplus which manifests itself in dreams, and these – in their turn – are embodied in myth and poetry. Ernst Bloch espoused the latter possibility, identifying it with the heretical Christianity of Joachim of Fiore and his followers.

Marcin Karas
TEILHARD DE CHARDIN’S TEMPORAL MESSIANISM
Marcin Karas discusses the basic categories of Teilhard de Chardin’s philosophy in order to show what was the French thinker’s vision of history. Temporal events are seen by de Chardin from a religious perspective, i.e. as leading humanity towards a new era. Everyday efforts can bring us closer to salvation. Thus, de Chardin’s philosophy of history can be defined as a temporal messianism; his monistic beliefs allowed him to reconciliate the material world with God, to combine work and prayer, progress and salvation. However, the main emphasis in de Chardin’s vision is laid on secular, temporal and natural factors.

Rafał Łętocha
MYTH AND RELIGION. CHRISTIAN AND „PAGAN” ROOTS OF THE ARCHANGEL MICHAEL LEGION
Scholars dealing with the ideology of the Archangel Michael Legion and of the Iron Guard often point out that archaic, pre -Christian elements are present in it. The Legionary Movement, while remaining a specifically Romanian cultural phenomenon, synthesized a number of seemingly contradictory notions and conceptions. Taking Mircea Eliade’s work as his reference point, Rafał Łętocha describes the relationship between Christian and archaic elements in the movement’s ideology, and points out those components which may be seen as an outgrowth of the cosmic Christianity characteristic – according to Eliade – of the pastoral and agrarian cultures of Dacia.