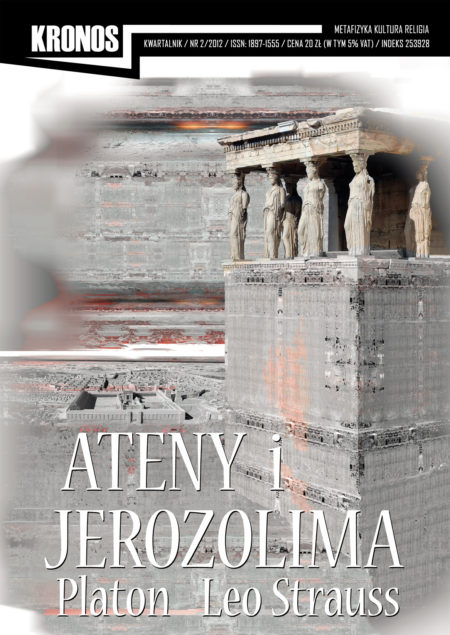 Tradition has attributed the ancient dialogue transmitted under the title of Epinomis to Plato. Nevertheless its unexpected astrological contents together with its peculiar relation to Plato's last work, The Laws, which it claims to continue and complete, have long bewildered the scholars and made it necessary to review this claim. The context within which the argument is to be settled is the position of the law-giver within a state and his right to formulate a doctrine suitable to his position. For the question at stake is not the philological curiosity of nominal authorship but rather the question whether the astrological doctrine of truth, according to which gods are nothing but heavenly bodies, ie. planets, is to be subjected to the criteria of truthfulness or to be regarded from the perspective of power and mere facticity.

Piotr Nowak
HEIDEGGER'S PUPILS
Piotr Nowak problematizes the creative apostasy of Heidegger's two most eminent pupils: Leo Strauss and Hannah Arendt. He considers the reasons for which both thinkers attempted to label Heidegger as an existential philosopher. Nowak suggests that this strategy was supposed to cover their own "existentialism" and everything they associated with it: nihilism, atheism, vitalism, decisionism and the idea of dividing humanity into the few wise ones, fit to rule, and the rest consisting of unreflective masses.

Jan Tokarski
WHEN THE RIVER IS MOTIONLESS AND THE BANKS SWAY AND TREMBLE
In his essay Jan Tokarski analyzes a less well-known part of Leo Strauss's oeuvre: his work on Tucydides's The Peloponnesian War. Strauss gives us a completely different vision of the ancient world from the one to which we have grown accustomed to via Plato. Strauss claims that for Tucydides chaos and disorder take precedence over order. The Hellenic world was to him something essentially fragile and impermanent. Thus, in his description of the greatest upheaval of the ancient world – The Peloponnesian War – Tucydides gives us the fullest account of the human world and condition. In the second part of his essay, drawing on the distinction which to Strauss was fundamental – that between the ancient world and the modern – Tokarski tries to find a modern equivalent of The Peloponnesian War. He suggests that we can read Vassily Grossman's Life and Fate in such a way and that this book radically undermines the ancient perspective on human nature. That which is inhuman can no longer be seen as the primordial state, existing prior to (Hellenic) culture which limits nature's anarchy. To the contrary, it turns out that we can see nature as succeeding culture, as – in a way – progress. In this sense modernity turns out to be a phenomenon which the ancient philosophers – neither Plato, nor Tucydides – cannot help us to comprehend.

Andrzej Leder
DEATH AND DESIRE. LEO STRAUSS AND ALEXANDRE KOJEVE ON TYRANNY
In his essay Andrzej Leder suggests that Xenophon's dialogue – debated by Leo Strauss and Alexandre Kojeve – concerns the relationship between thinking and politics. Can one be independent of the other? Does politics enable thinking, or is thinking the condition of politics? And what exactly is the domain of autonomy and sovereignty? It seems that the question about what makes politics practicable is at the same time a question about what makes thinking possible. Thinking becomes political and politics itself becomes inseperable form thinking. On the other hand, Xenophon makes us aware of the following problem: Who is the sovereign? The tyrant, who today can be seen as democratic public opinion, or the wise man, represented today by the intellectual? Such questions, Leder claims, have to remain unanswered if we do not emply notions such as desire, the Other, political commonwealth and death; if we do not problematize democracy itself.

Michał Otorowski
THE PHILOSOPHY OF ANTI-SALON. STANISŁAW CHOŁONIEWSKI BETWEEN JOSEPH DE MAISTRE AND JAN POTOCKI
Count Stanisław Chołoniewski (1791–1846) witnessed two dramatic events – Jan Potocki's suicide and his son's miraculous recovery which occured 26 years later in the same room in Uładówka. Chołoniewski used this strange coincidence to construct a philosophical myth – based on Potocki's former quarrel with de Maistre – the aim of which was to challenge Enlightenment thought and to re-Christianize the notion of progress. However, Potocki's quarrel with de Maistre seems – in Chołoniewski's mythologized version – distorted and simplified which becomes clear when we consider the dialogue between the naturalist and the theologian in Potocki's The Manuscript Found in Saragossa (day XXXVII) and de Maistre's 1814 letter to Potocki. These documents enable us better to understand Chołoniewski's philosophy who – being de Maistre's pupil – never quite freed himself from the influence of Potocki, that maitre inconnu of Polish philosophy of the early 19th century.