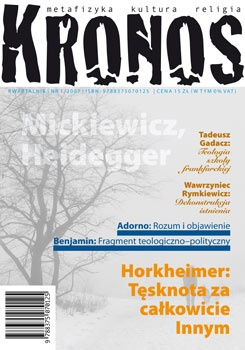 Spis treściEdytorialSummariese-book
1/2007
MICKIEWICZ HEIDEGGER
Adam Lipszyc
The Late Heidegger and Early Benjamin: Neopaganism and Gnosticism in the Philosophy of Language
In his article Adam Lipszyc analyzes the philosophical conceptions of language present in Martin Heidegger’s late writings and the early ones of Walter Benjamin. Both authors oppose traditional conceptions of language, whether naturalistic or conventional-instrumental, claiming that they merely skim the surface of language and fail to recognize its inner character which Lipszyc calls evocative-magical. Neither Heidegger nor Benjamin see language as a strictly human phenomenon, but as constitutive of the world as such. In human speech the language articulates itself so that Being can manifest itself (Heidegger); or (in Benjamin) speech brings forth and translates the mute essence of things. In the latter instance, we are dealing with a creatio continua which in fact becomes the task of redeeming fallen nature. Lipszyc stresses that although both Heidegger and Benjamin reject the (post)Cartesian notion of the subject’s autonomy, they differ in their perception of man.

Grzegorz Uzdański
A Design Filled With Earth: Heidegger and the finitude of time
In his article Grzegorz Uzdański analyzes the notion of negativity in Heidegger’s philosophy. Starting with a brief description of Dasein’s finitude (the being-toward-death which constitutes Dasein by relating it to nothingness), Uzdański turns to Heidegger’s description of the work of art as “a quasi-transcendental subject” and suggests that German philosopher’s conception of art is a consistent development of his ontology. Just as the material of which the work of art is made constitutes its base and limit, so does the earth condition the world as totality of meaning – it both reveals and conceals it, determines its beginning by delimiting its end. The world and the earth remain in constant opposition which in fact constitutes them. This does not mean, however, as Uzdańki stresses, that Heidegger sees nothingness as primal – it is as derivative as Being itself.

Michał Warchala
The Romantic Religion: Some of its Main Apsects
In his article Michał Warchala reconstructs the positive aspects of Romantic rebellion. Without negating Harold Bloom’s opinion that Romanticism is shaped by an “anxiety of influence”, an awareness of one’s own derivative character, Warchala claims that Romantic literature is largely grounded religious intuition. The so-called “romantic religion” evolved as a response to the disenchantment of the world and the triumph of modern natural religion during the Enlightenment. The Romantic belief in the creative powers of the imagination must be seen as a reaction to attempts to naturalize religion. Warchala discusses Romanticism’s predecessor, Rousseau, the English poets Wordsworth and Shelly, as well as the German Romantics – Schlegel, Schleiermacher and Hoffman. But it is William Blake who is taken up by the author as the most representative figure.

Agata Bielik–Robson
Cryptotheologies of Deleuzianism: on Michal Herer's Gilles Deleuze. Structures - machines - creations
In her polemical article, “Cryptologies of Deleuzianism”, Agata Bielik-Robson discusses Michał Herer's book Gilles Deleuze. Structures-machines-creations. Being generally critical towards Deleuze's philosophical perspective, Bielik-Robson admits that within Herer's framework Gilles Deleuze presents himself as a mature, consistent and rational thinker. Bielik-Robson focuses mainly on analyzing Deleuze's project (as described by Herer) within the framework of Platonism, reductionism and transcendental ontology of the machine. Her analysis reveals a number of difficulties and contradictions within Deleuze's monistic world of Derridian differance and pure flux of energy, as well as his attempt to build a pure empirical transcendence on the basis of the concept of the machine.

Urszula Idziak
Kenosis of discourse
In her essay Urszula Idziak aims at presenting Jacques Derrida's thought as ground for the potential meeting with philosophy of religion, or rather: its specific, elusive lack. Taking into account a plethora of paradoxical figures of religious thinking in general, as well as a certain manner established by contemporary French philosophy, Derrida's thought, despite it's essential a-religiosity, has been acknowledged as religious a rebours. For this reason, as the author notices, Derrida was invited to engage in a dialogue with religious thinkers and present his views on most crucial matters of contemporary philosophy of religion. Although Derrida has often rejected any relations of his philosophy to negative theology, certain aspects of it can be traced in his works. According to Urszula Idziak, Derrida exposes himself as a radical "mystic", whose path to theology leads through language.

Stanisław Pieróg
Adam Mickiewicz's Fourth "Paris Seminar": an Interpretation
Between 1840 and 1844, at the Collège de France, Adam Mickiewicz gave a series of lectures on Slavic literature which later came to be known as “the Parisian seminars”. In his article Stanisław Pieróg analyzes the fourth and final part of the lectures in which Mickiewicz not only discusses Slavic literature but presents himself as the representative of Europe’s Slavic nations. He points to an import characteristic of Slavic literature, namely – its messianism which derives directly from the spirit of the common folk and is unlike anything Western literature has to offer. Pieróg argues that Mickiewicz speaks not so much as a prophet, but a religious reformer whose aim is to infuse the philosophical systems and ideologies of the West with a new spiritual energy. The impulse for the moral regeneration of Europe is to come from nations which are not “bookish” and whose contribution to the West will not be new thought but moral action.