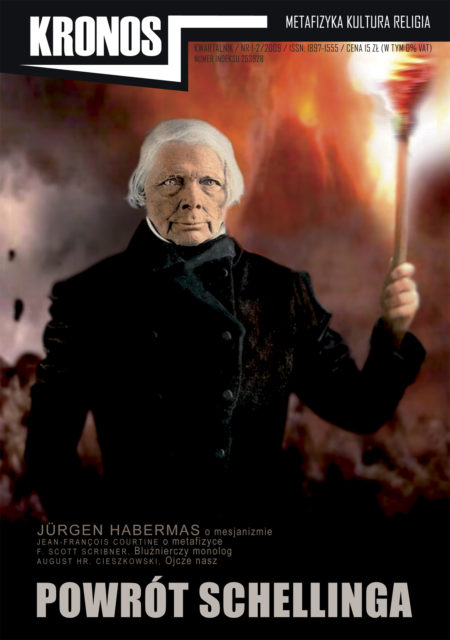 Spis treściEdytorialSummariesZAMÓWe-book
1-2/2009
POWRÓT SCHELLINGA
Piotr Graczyk
Yorick’s Skull, Or the Mythological Process as History (Translator’s Commentary)
For Schelling mythology can be seen as a natural process, namely – the process of world history in which subsequent forms of consciousness are formed. Myths constitute the natural idiom of the human reason in its development towards self-awareness. They cannot be reduced to their rational content – on the contrary: all rational content of human history can be reduced to the language of mythology. Myths inaugurate humanity and prepare it for the Christian Revelation which saves man from the trap of history’s end. They are the wildness at the heart of reason. Schelling’s mythology is feminist in principle: Gods are the noemata while Goddesses – the divine noeses, acts of the God-bearing consciousness.

Wawrzyniec Rymkiewicz
A Fundamental Apocrypha
Warzyniec Rymkiewicz discusses the treatise On the Nature of the World & the Soul which until mid 19th century was believed to have been written by Timaeus of Locri and was considered as the primary source of Plato’s famous dialogue (which according to Timon of Phlius was unauthentic). It later became clear that the treatise is an apocrypha which attempts to instate itself as the Beginning. Rymkiewicz discusses the history of the treatise and the different versions of its origin. Historical analysis allows him to raise the question of the nature of philosophical concepts and thinking itself – it discloses its chaotic structure. The apocrypha greatly influenced F. W. J. Schelling who believed it to be Plato’s original dialogue. One of the treatise’s figures – that of the active feamle principle (creative matter) – would later appear in Schelling’s own Ages of the World and Philosophy of Mythology.

Piotr Nowak
“In the Bigynnyng God Made of Nouyt Heuene and Erthe…”
Is there any relation between the doctrine of Salvation and the inquiries concerning Creation? What is the relationship between a primordial, immemorable “history” and history based on strict facts and memorable events? Does the Beginning belong to the process of becoming? Is the source of historical events historical itself? What were the first thoughts of God? What constitutes His essence: strength or quite the opposite – weakness?
Piotr Nowak suggests possible answers to these questions on the basis of arguments derived from works of contemporary biblical scholars (P. Ricoeur, A. LaCocque), historians of Jewish mysticism and Gnosticism (Gershom Scholem, Hans Jonas) and in particular F. W. J. von Schelling’s Weltalter – the main object of Nowak’s inquiry.

Maciej Kropiwnicki
Lacan’s Second Life: on the New English Translation of Écrits
In 2006, forty years after the publication of Écrits, the most famous collection of Jacques Lacan’s texts, its first complete English translation was published. The aim of the present paper is to discuss this book in the broader context of the translation process of Lacan’s work in the English-speaking world. In his interpretation of Écrits Maciej Kropiwnicki also raises the question of relevance of Lacan’s thought for present-day debates in humanities and emphasizes the importance of Lacan’s conception of truth.

Andrzej Wawrzynowicz
Our Father as a Project for a Practical Realisation of Cieszkowski’s Concept of Historiosophy
The aim of the article is to highlight specific features of the evolution of Cieszkowski’s philosophical system towards a distinctive form of religious philosophy. Cieszkowski’s Our Father presents the Lord’s Prayer as a symbolic “testament” of Jesus Christ. The perception of Christ as the key link in human history enabled Cieszkowski’s historiosophical reflection to break out of its initial Hegelian confines. Hegel regards the moment of the emergence of the Christian principle as a fundamental historical turning point, however it is not adequately reflected in Hegel’s proposed general historiosophic structure. While maintaining the fundamental dialectic structure of history, Cieszkowski engages in a partial reinterpretation of the importance of certain historical moments on the basis of a millenarist doctrine of development in which history is divided into three successive fundamental epochs: the Age of the Father, the Age of the Son and the Age of the Holy Spirit.

Piotr Graczyk
The Polish History of Violence. A Reply to Mateusz Werner
Piotr Graczyk replies to Mateusz Werner who accuses him that by praising the cultural achievements of communist Poland he unwittingly legitimizes violence. Graczyk states that thinking as such is necessarily related to violence. We denounce the violence of the French Revolution but we would not wish to do away with its democratic fruits. Our attitude towards communist Poland is similarly ambiguous. It violated us as a nation but also – during the 1960s – allowed Polish intellectuals to rise to highest levels of thought. This dilemma is present throughout 20th century Polish culture and is even to be found in Stanisław Brzozowski’s writings.