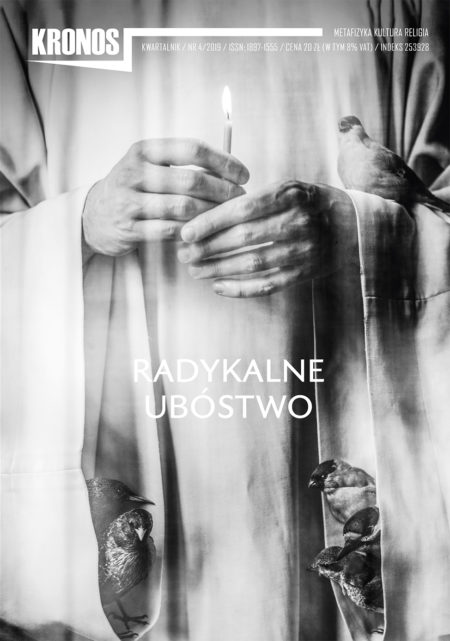 Rafał Tichy
ULTIMATE POVERTY. THE MEDIEVAL SPIRITUAL FRANCISCANS' PHILOSOPHY OF HISTORY
Spiritual Franciscans (or Fraticellis) were a movement formed in the middle of the 12th century within the Franciscan order. The movement exerted a major influence on the spiritual, intellectual, cultural and political life of the late Middle Ages. Spiritual Franciscans' most important representatives include Pietro di Giovanni Olivi, Angelo da Clareno and Ubertino of Casale. Fraticellis, while drawing on the fundamental aspects of Joachim of Fiore's philosophy of history, combined them with their Franciscan experience of radical poverty, giving them a new, deeper dimension. Thus they created an original theology of history on the grounds of which they uncovered the social dimensions of the world's ages, developed their conception of the Messiah's three comings, pondered the question of changes that Christianity will undergo upon the transition to the Age of the Spirit, depicted eschatological events, finally – discovered their own special historical role.

Mateusz Stróżyński
ANGELA OF FOLIGNO'S MYSTICISM OF POVERTY AND THE SPIRITUAL FRANCISCANS
The article is an attempt at describing the relation between Angela of Foligno's (1248-1309) Book and the milieu of Umbrian Spiritual Franciscans, on two planes. The paper presents the historical context  of the turn of the 13th and 14th centuries, with the emphasis placed on the writing of The Book and on its authors' connection to the movement of Spiritual Franciscans and the repressions against it. Moreover, the paper presents a picture of personal relations between Saint Angela and the circle of her disciples in Foligno. Finally, it constitutes a preliminary answer to the question of to what extent The Book contains ideas close to the Spiritual Franciscans, particularly in the context of St. Angela's mysticism defined as “mysticism of poverty.”

Józef Majewski
FROM DAMNATION TO JOINT PRAYER? WHAT KIND OF RELATIONS BETWEEN RELIGIONS DOES THE WESTERN CIVILIZATION NEED
The future of Christianity in the West is closely and intricately connected to the question of other religions' condition and of the relationship between religions. The deep, dynamic, unpredictable and turbulent global changes in the spheres of communication and the media, society and culture as well as politics are drawing religions as well into its orbit making it “no longer possible to view world religions as merely existing next to each other; we should rather see them together as depending on, and influencing, each other. Today no religion can remain in splendid isolation” (H. Küng, 1988). What does it really mean, however – what should be the relations between religions today? The question has been answered variously and the answers give rise to tensions, discussions and conflicts. I intend to present a map of five approaches to the problem in question; they are all well established so we can treat them as model answers even if the boundaries between them are not always clearly drawn: 1. radical exclusiveness; 2. moderate exclusiveness; 3. inclusiveness; 4. pluralism; 5. inclusive pluralism.

Jerzy Ziemacki
THE DISCOVERY OF SELF AND THE FORMATION OF SPECIES
Słowacki was a great poet. But according to Wincenty Lutosławski he was also a great naturalist or, more exactly, a nature philosopher explicating what life is, how it originated and evolved in the past. In the 1909 Lutosławski's article discussed here, Słowacki – born a hundred years earlier – is presented as the author of an original theory of the evolution of life on Earth, and a continuator of Lamarck's transformism. From the French naturalist's fundamental premise of biological forms' transformation he drew significantly different conclusions than Darwin later did. What the three evolutionists – Lamarck, Darwin and Słowacki – had in common was the conviction that throughout hundreds millions of years the shapes of plants and animals (including humans) were subject to transformations. This view – based on empirical observation of nature and giving rise to vital philosophical questions – was first developed for modern science by the oldest of the above thinkers: Jean Baptiste de Monet de Lamarck (1744–1829) in his magnum opus Zoological philosophy, published in 1809 – the year, one should add, when Darwin and Słowacki, both inspired by Lamarck's breakthrough oeuvre, were born.