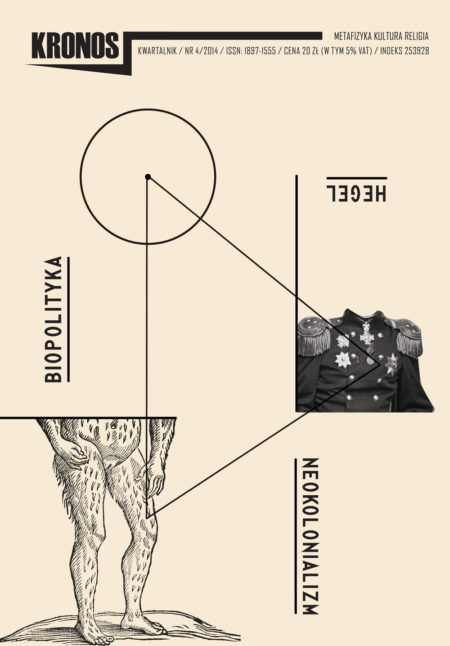 THE DIVINE COMEDY IN REVOLUTIONARY TIMES
Dante’s poem is an allegory of modernity; the paradigm of post -medieval European thought is not the act of breaking out of the Platonic cave, but the passage, through the Inferno and Purgatory, to Paradise. Freudian and post-Freudian psychoanalysis can be interpreted in Dante’s spirit; the psychoanalytical -theological context can be applied to a reading of Hegel’s Jena Lectures. According to Hegel, the Purgatory of modernity – the most effective lesson in subjectivity or, in other words, the ability to objectify and instrumentalize the self – is capitalism, a form of “group therapy.” However, such an understanding of capitalism on the ground of Hegel’s theory involves an inextricable aporia: the education which capitalism affords is connected with dehumanisation and pauperization of whole social groups, laying down the foundations for a revolution.

Jan P . Hudzik
POLITICAL PHILOSOPHY: THE MOST RECENT HISTORY OF PRIDE, CONFUSION AND PRAGMATISM
In reference to the history of political philosophy, Jan Hudzik traces the development of self -awareness of social science and the humanities, their gradual shift from naturalistic positions – scientific, metaphysical, analytical – to anti -naturalism. In the first part of the essay, Hudzik offers a deconstructive reading of selected mid-20th century texts (by L. Kołakowski, I. Berlin, A. Schütz and C. Wright Mills) and points out how their authors engage in constructing social subjects, such as “the people,” “the masses” or “the citizenry.” The second part considers the confusion reigning in the field of political philosophy towards the end of the 20th century when the discipline faced accusations of sterile academicism, intellectual pride and of losing touch with reality. At the turn of the 21st century, postmodern culture forced political philosophy to reconsider its own status – to ask itself why it exists and what are its purposes. The third and fourth part summarize some of the answers to the above questions which can be found in classical philosophy and analytically inclined political theory. The author then goes on to discuss the so -called political turn in the humanities, brought about by the linguistic turn, anti -naturalistic in its attitude and based on the conviction that social reality is created through discourse. As a result of all these turns, political philosophy came to be treated – especially by left -wing, Heideggerian, post -fundamentalist social theorists – as a form of “political critique,” focusing on the use of language in the public sphere, and sharply distinguishing between “politics” and “the political.”

Waldemar Bulira
POST -MODERN BIOPOLITICS: THE CASE OF ÁGNES HELLER AND FERENC FEHÉR
Biopolitics is one of the central issues of Ágnes Heller’s and Ferenc Fehér’s political philosophy, especially in their analyses of postmodernism. Postmodernism, as the two philosophers understand it, is defined as the rise – in the public sphere of post -modern societies – of new social movements which forge their identity by politicizing the body. Taking cue from their own theory of modernity – rooted in existentialism and the liberal tradition – Heller and Fehér point out that those who espouse biopolitics in fact advocate a form of holistic and quasi -universalistic social ontology, thus posing a threat to modernity’s ultimate value – liberty. Waldemar Bulira argues that such an understanding of biopolitics refl ects the main ideas of postmodern critical theory worked out by the Hungarian philosophers.

Henryk Głębocki
ADAM GUROWSKI’S THE TRUTH ABOUT RUSSIA, OR THE ANATOMY, PHYSIOLOGY AND PATHOLOGY OF HISTORY
With the failure of Józef Zaliwski’s expedition, the unsuccessful attempts at rekindling the November Rising and the fiasco of democratic revolutions in Western Europe in the years 1832-34, the Polish Great Emigration faced an unprecedented crisis. People started losing hope and faith in the meaningfulness of sacrifice. One of the most radical expressions of this pessimism came from Duke Adam Gurowski (1805-1866) who in a pamphlet titled The Truth about Russia and the Mutiny of its Provinces – published in 1834 in Paris – argued that Poland wasn’t worth the sacrifice and did not deserve the sympathy of Europe. Gurowski put his own country in front of the tribunal of History, calling it backward, degenerate and “rotten,” and arguing that it should be abolished altogether to clear ground for the construction of a new, better world. Most shockingly to his compatriots, Gurowski believed that this regenerative work should be accomplished by the Russian Empire and its autocratic regime which he had so recently denounced.

Artur Rodziewicz
THE COUNTRY BUMPKIN AT THE CROSSROADS. TOWARDS A PLATONIC IDEA OF EUROPE
The essay analyzes the concepts of “Europe” and “Europeanness” in reference to Rémi Brague’s Europe, la voie romaine and Edward Said’s Orientalism, which latter book Artur Rodziewicz perceives as a work of a mind shaped – via Foucault – by European ideas. Rodziewicz offers an interpretation of contemporary Europe as an outgrowth of “the Athenian spirit” whose quintessential expression is to be found in Aristotle’s The Constitution of Athens. The author argues that the concept of “Europeanness” is inherently Platonic, and since Platonism was taken up and developed by Christianity, “Europeanness” cannot be understood without taking into consideration Christian political thought, whose ideas were reflected in the political system of the Kingdom of Poland (1569-1795), and later – in Polish messianism.