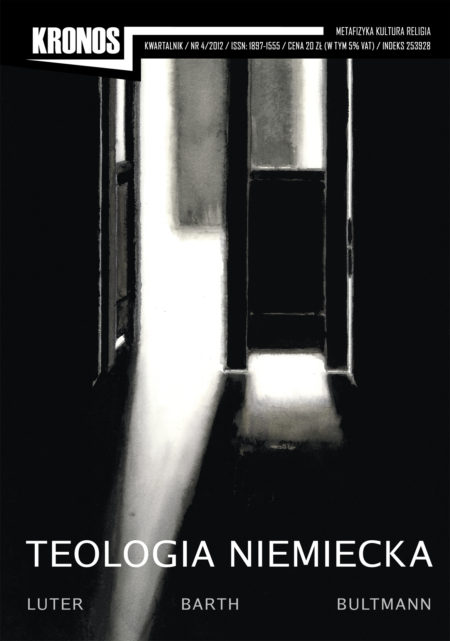 Piotr Augustyniak offers a commentary on the 14th century treatise Theologia Deutsch which belongs to the tradition of “Rhenish mysticism” and constitutes one of the most important links in the development of German theology. The author points to the work’s existential and ontological dimension. The latter centers around the concept of “wesen” and is discussed by Augustyniak in relation to the thought of Meister Eckhart, clearly alluded to by the anonymous author of Theologia Deutsch. However, the ontological speculations are meant to prepare the reader for a much broader discussion of proper and improper ways of being and experiencing the world. This existential dimension of the treatise is explained by Augustyniak as a radicalization of Eckhart’s position and at the same time – as an anticipation of Luther’s thought.

Marek A.Cichocki
LUTHER AS A CONSERVATIVE REVOLUTIONARY
In his essay Marek Cichocki poses the following question: Were the historical consequences of Lutheranism in Germany solely the result of theological controversies and postulates of reform, or did they have more fundamental, structural causes? One such cause, as Cichocki points out, was the post-Classical division of Europe into north and south. New productive forces, released by the inventions and geographical discoveries of the Renaissnce, led at the beginning of the 16th century to increased tensions between what the recent achievements seemed to promise and what actually was possible due to limited resources. The theological squabbles over the selling of indulgences, or even the dispute concerning the relation between deeds and grace, may therefore be treated – and was no doubt treated in such a way by Luther’s contemporaries – as an expression of basic economical problems of debt and fiscalism. Such a perspective goes a long way in explaining the popularity of Luther’s teachings and allows us better to grasp their full impact as well as their peculiar conservative-revolutionary character. Finally, the very concept of “Roman decadence” may in this light be understood as an attempt by the north to define itself through negation.

Jowita Guja
RADICALLY NEGATIVE THEOLOGY – KARL BARTH’S LETTER TO THE ROMANS
Karl Barth’s Letter to the Romans is an astonishing work in which the author expressed some of his most controversial ideas. He states, for example, that every religion is in fact a form of un-belief, of idolatry, and that man is the enemy of God who is entirely concealed from human eyes. Barth also claims that faith as such is impossible for man to attain. What is more, he believed that all this can actually be inferred from the writings of none other than St. Paul himself. In her essay Jowita Guja suggests that Barth’s reading of St. Paul is in fact infl uenced by the works of Nietzsche, Feuerbach and Kierkegaard.

Tadeusz Zatorski
“...TO BECOME LIKE LITTLE CHILDREN.” FRANZ OVERBECK ON THE APOCALYPTIC MESSAGE OF THE NEW TESTAMENT
Tadeusz Zatorski discusses Franz Overbeck’s views on Christian eschatology. Overbeck (1837-1905) was a German theologian working in Basel and a close friend of Nietzsche. In his opinion the teachings of Jesus all hinged on the conviction that the end of the world was at hand. This perspective – according to Overbeck and other theologians, for example Johannes Weiss – explains the radicalism of the moral prescriptions offered by Jesus. It also suggests that the ethical code promulgated by the Nazarene was meant to have had a purely provisional character and thus would prove of little use in organizing the life of an abiding “moral community” which rejected the idea of an impending apocalypse. Unlike other Christian exegetes Overbeck does not attempt to interpret Jesus’ apocalyptic prophecies as referring to a different temporal dimension. Having failed, the Nazarene’s prophecy gave rise both to theology (as a tool of polemically engaging Classical culture and thought) and monasticism (whose martyrium quotidianum was an attempt to accomplish goals unattainable in this world). Modern culture’s rejection of the idea of an imminent end of the world was for Overbeck a sure indication of the forthcoming demise of Christianity as an idea constitutive to European civilization.

Andrzej Serafin
LUTHER REDIVIVUS. ON YOUNG HEIDEGGER AS THE NEW LUTHER
Heidegger’s ambition in the early twenties was to become the new Luther. One can even regard his whole oeuvre as an attempt to repeat and radicalize the reformer’s stance. Although Heidegger’s published works hardly ever quote Luther directly, many features and assumptions of his philosophy stem from this predecessor. Among the most important is the ambition to dismantle the tradition of philosophy and to recover the essence of original Christianity which has been obscured by subsequent interpretations. In the planned but eventually unwritten essay on The Ontological Foundations of Late Medieval Anthropology and the Early Theology of Luther – which Andrzej Serafi n tries to reconstruct on the basis of the early Freiburg and Marburg courses – Heidegger repeats this attempt of recovery and at the same time shows Luther’s position in the formation of modern philosophy.

Piotr Graczyk
KIERKEGAARD AND THE REFUSAL TO COMMUNICATE
Piotr Graczyk discusses Kierkegaard’s essay “Ancient Tragedy’s Reflection in the Modern” from the fi rst volume of Either / Or. Graczyk sees it as an incisive critique of modernity, revealing the foundations of contemporary philosophy. Ancient tragedy – governed by “substantial categories” and based on the notion of group responsibility – constitutes language and endows man with specifi city understood as his or her own portion of blame for the ways of the world. Modern tragedy, with its non-substantial character, occurs in a world devoid of specifi city and thus leads to a crisis of communication impelled by the sense of one’s total responsibility for evil. Most 20th century philosophies are based on the scheme of modern tragedy as defined by Kierkegaard which can be overcome either through faith or revolution... or both.

Robert Pawlik
KIERKEGAARD AND CATHOLIC ASCETICISM. REFLECTIONS ON ERIK PETERSON’S KIERKEGAARD AND PROTESTANT THEOLOGY
In a letter to Carl Schmitt, dated September 18th 1978, Jacob Taubes wrote: “You did not have a better friend than Peterson, whom you also led onto the path to the ecclesia”. Taubes is reiterating here the popular, though wholly unwarranted opinion that the jurist Carl Schmitt influenced the Lutheran theologian Erik Peterson in his decision to convert to Roman Catholicism in 1930. The more likely reason was Peterson’s intense study of the works of Søren Kierkegaard whom he regarded as his “only spiritual mentor”. The only problem is that Peterson hardly ever spoke about Kierkegaard directly. The only exception is his 1947 essay Kierkegaard and Protestant Theology in which he argues that Kierkegaard’s most important concepts cannot be reconciled with the spirit of Protestantism but instead bear an affinity to the tradition of pietism and Catholic asceticism.

Paulina Sosnowska
PETERSON – USING THEOLOGY TO DISCIPLINE PHILOSOPHY
Paulina Sosnowska offers a critical commentary on two important essays by the theologian Erik Peterson – Kierkegaard and Protestant Theology and Existentialism and Protestant Theology – both included in this issue of Kronos. Sosnowska does not share Peterson’s conviction that Kierkegaard’s work is rooted in the tradition of Roman Catholic asceticism. She also rejects the German theologian’s attempt to place Heidegger’s philosophy within what he calls the paradigm of secularization.

Michał Piekarski
CAPITALISM, PROTESTANTISM AND THE HOLY TRINITY
According to Max Weber capitalism as a socio-economical system could have arisen only on the basis of a specific ethos of work which forms an integral part of Protestantism. Thus Weber made a connection between the existence of capitalism and a specifi c type of morality. However, he did not pay enough attention to the fact that protestant thinkers introduced a number of subtle conceptual and ideological changes in the traditional language of philosophy and theology. Without grasping this phenomenon it is impossible to fully understand the sources of capitalist thinking. As Michał Piekarski points out, the Lutheran-Calvinist break with Roman Catholicism included a redefinition of certain basic theological notions, among others – predestination. By analyzing these conceptual changes we gain a better understanding of the patristic theory of the Holy Trinity which in turn allows us to see the ontological, rather than purely ethical, dimension of the quarrels concerning capitalism.

Karol Tarnowski
TRANSCENDENTALS?
Karol Tarnowski returns to the problem of the so-called transcendentals, i.e. truth, goodness, beauty, unity and being. The author analyzes their current status in the context of the critique which has been levied at them since the times of Plato – beginning with Aristotle and ending with the 19th and 20th century philosophical projects of Hegel, Nietzsche, Heidegger and their heirs. The dispute over the existence of transcendentals cannot be detached from the problem of evil and universal suffering which today is often neglected due to its biblical or – in general – religious provenance. Its currency, Tarnowski suggests, may be affi rmed by relating the problem of transcendentals with transcendentalism and by redefining the essential yearning for that which is good, true and beautiful as jouissance in Levinas’ understanding of the word.

Anna Dziedzic
FINAL REFORMATION – AUGUSTYN WRÓBLEWSKI’S RED RELIGION
Augustyn Wróblewski (1866-1913?) was a biochemist and a propagator of anarcho-communism. To his revolutionary ideas and scientifi c worldview Wróblewski added the programme of creating a transdominational Red Religion which rejected the belief in a transcendent God and the supernatural order. In his metaphysics Wróblewski makes use of Ernst Haeckl’s monism and Juliusz Słowacki’s ideas. For Wróblewski “God” is the universe itself and the powers which govern it. The world is a union of matter, energy and spirit – the latter being responsible for universal progress. Be worshipping cosmic development and man’s divinity, the Red Religion aims at emotionally involving people in the scheme of anarchistic utopia.