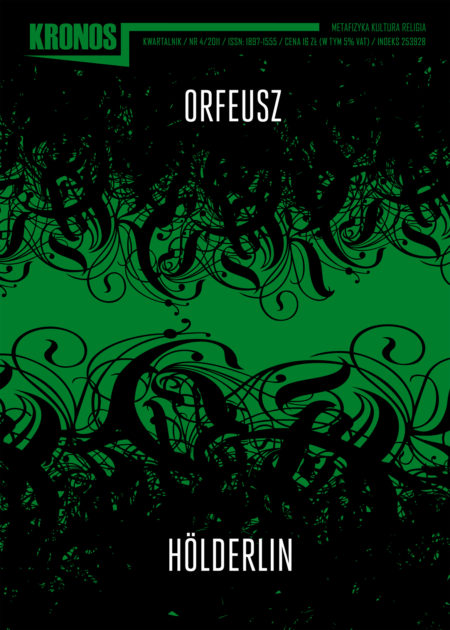 Spis treściEdytorialSummariesZAMÓWe-book
4/2011
ORFEUSZ / HÖLDERLIN
Krzysztof Bielawski
ORPHIC DIONYSIUS. SOME FRAGMENTS
The paper focuses on the so -called „Orphic” tradition of the myth about Dionysius, son of Zeus and Persephone, queen of the underworld, death and afterlife. Literary sources for this version of the myth are scarce and late. The central themes of this myth are anthropology, anthropogenesis, eschatology and connections with the Mysteries: Dionysian and Orphic rituals. The paper contains a translation, interpretation and commentary to the most important Orphic -Dionysian texts by Olympiodoros and Pausanias.

Karolina Sekita
THE ORPHIC GOLD TABLETS
The article presents one of the most exciting and controversial archaeological finds: forty nine texts known as „Orphic”, engraved on thin pieces of gold, found in tombs. They describe the path that leads the initiated to their destiny after death. Moreover, they confirm that this liminal experience allows the soul to enter the realm of eternal happiness, instead of stepping into the gloomy kingdom of Hades which – as related by the epic tradition – has always been repulsive to man.

Krzysztof Bielawski
ORPHISM? WHAT THE HELL IS THAT?
What is Orphism? Does it exist or has ever existed? Is it a real part of ancient Greek culture or just an invention of modern scholars who try to bring together and give a name to diverse religious, literary and philosophical inspirations? In his essay Krzysztof Bielawski outlines the development of this argument in modern scholarship, points out contradictions and discusses the main lines of possible interpretation. The author’s answer is that orphism does exist as a subject of theological, philosophical and literary research even if we cannot clearly grasp it and point to any coherent philosophical or religious movement.

Piotr Augustyniak
PHAEDO AND THE OTHER MODERNITY
In what way does the archaic meet the classical in the text of Phaedo? Is Theodor Ebert right to claim that the archaic, represented by Pythagoreanism in the dialogue, is by nature a metaphysical dogmatism, and that the classical, i.e. the Athenian, consists in enlightened skepticism which replaces metaphysical dogmas with an infinite dialectical process? Is the transition from metaphysics to dialectics, i.e. from dogmatism to skepticism, the classical turning point for Plato? Is it not rather the case that both metaphysical dogmatism and dialectics (as well as the intellectual nihilism of misology) are possible only in classical thinking where (according to Havelock) the individual subject of reflection is born? If so, Phaedo as Plato’s deconstruction of metaphysical thinking about the soul is not an anti -Pythagorean manifesto uncritically propagating a new, classical understanding of the world, but an attempt to protect this thinking from the extremes of both metaphysical fossilization and radical doubt. The text of Phaedo can be thus treated as an inspiration in the search for an alternative formula of modern intellectual culture.

Michał Piekarski
TWO LAWS. THE DIALECTICS OF LANGUAGE IN PLATO’S GORGIAS
Plato’s Gorgias points to an ambivalence inherent in the concept of law which sometimes is seen as derived from nature and sometimes believed to have been artificially established. The same is true about language. We seem to be constantly wavering between what can be called the rules of speech and speech itself; between a definition or a norm and that which is being defined. The Platonic discourse, if we look at it closely, reveals a fundamental hiatus. Faced with it Plato retreats into myth and language, descriptive at first, becomes visual.

Piotr Nowak
NOTHINGNESS AND ABSENCE
Nothingness was something the ancient Greeks remained silent about. They believed that any speculation in this regard led us astray and into the dangerous waters of nonexistence. Even Plato, who in his Sophist accurately described the aporetic character of the relation between being and non -being, did not introduce nothingness into the philosophical discourse, i.e. into the realm of logos. Martin Heidegger in his attempt to overcome metaphysics (which culminates in Nietzsche’s “reversed Platonism”) restores the “dignity” and the epistemological potential of the concept of nothingness. He thus takes thinking beyond the European tradition towards the East – towards wisdom which expresses itself in a silent contemplation of being.