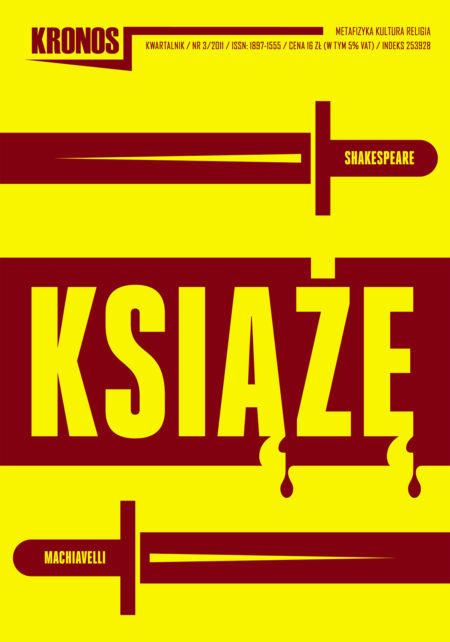 Spis treściEdytorialSummariesZAMÓWe-book
3/2011
KSIĄŻĘ
Piotr Nowak
A LESSON OF REALISM
Piotr Nowak reads Machiavelli’s The Prince as a description of the relations of power. Machiavelli was the first to claim that politics – in order to be effective – must become an end in itself. There are moments when it must stand beyond good and evil, resort to violence, betrayal and lies. Politics encompasses morality, religion and virtually all human practice. Machiavelli’s thought is still relevant today but treated consistently it deprives human beings of their autonomy and reduces them to a handful of behavioral patterns, while it views the state as holding absolute sway over human life and freedom.

Piotr Nowak
GODS AND CHILDREN. SHAKESPEARE READS THE PRINCE
Piotr Nowak focuses on the antagonism between youth and age, represented in Shakespeare’s Measure for Measure by Angelo and the Duke. Naive youth allows itself to be manipulated by cunning age – this conflict in Shakespeare, however, has a strictly political significance. It is not merely a description of „the conflict between generations”. Youth as a symbol of spontaneity, idealism and novelty falls prey to the ambitions of power-seeking age. As a result youth itself grows old and its enthusiasm is transformed into resentment.

Jan Tokarski
BLOOD AND SACRED POWER
In his essay Jan Tokarski investigates the complex relations between religion and politics in Shakespeare’s plays by focusing on two of them: Richard II and Julius Caesar. This relation, Tokarski believes, can be seen either as a movement from below – from the mud of this earth – to the divine spark present in Man, or as a descent from the purity of the Absolute to its necessarily impure embodiment in the world of human affairs. On the one hand, then, Man becomes a mortal God; on the other – God becomes a mortal Man.

Aleksander Ochocki
SUNS, CEDARS AND AXES
In his essay Aleksander Ochocki challenges Jan Kott’s famous notion that in his plays Shakespeare described the workings of the Great Mechanism which supposedly determines the course of history and politics. According to this theory particular characters have no genuine role of their own to play but a merely cogs in the historical machine. However, in his Lectures on Aesthetics Hegel has noticed something quite different, namely – that for Shakespeare world history cannot be separated from individual character. History may reveal certain patterns of repetition, but its rules change allowing for exceptions and deviations.

Małgorzata Grzegorzewska
THE HEAD OF GORGON, OR MACBETH BEYOND POLITICS
The Tragedy of Macbeth is most commonly interpreted as a political drama. Małgorzata Grzegorzewska suggests a change of perspective. She views the stage images and visual representations (evoked in the text of the play in the form of poetic ekphrasis) through the lenses of the post-phenomenological reflection of Jean-Luc Marion and juxtaposes them with the philosopher’s account of visual representation. Shakespeare does not show onstage the killing of the king, replacing the bloody scene with a verbal picture of Gorgon. She symbolizes the dullness of a flat picture, without any mystery or depth. The frontal presentation of Gorgon is a mere façade, the opposite of a living face, and her challenging gaze foretells imminent death. Placing the bloody head of Gorgon behind the stage, the playwright invites the spectator to enter, through the frames of a theatrical image, a sphere where one can catch a glimpse of the invisible.

Mikołaj Wiśniewski
LIMITS OF CONTROL. HAMLET
Mikołaj Wiśniewski discusses the character of Hamlet as embodying the modern quest for subjective autonomy and control. What stands in the way of this philosophical ambition is language within which – as long as it remains a living phenomenon – meaning constantly proliferates and is made ambiguous. Wiśniewski then goes on to a discussion of Shakespeare’s language to show that the experience of reading Hamlet – or in fact of any other play by Shakespeare – in the original is precisely that of permanent indeterminacy.

Piotr Graczyk
THE BAROQUE ON TRIAL
According to Piotr Graczyk Walter Benjamin’s theory of the Baroque (formulated in his postdoctoral thesis) can be best understood by referring it to Kafka’s The Trial. This perspective may also be helpful in grasping Benjamin’s attitude to the ideas of Carl Schmitt which Graczyk compares to the attitude of Kafka’s protagonists to the world of lawyers and state officials.

Henryk Izydor Rogacki
JAN KOTT’S USEFUL BOOKS. SOME CRITICAL REMARKS
Henryk Izydor Rogacki critically reinvestigates the most famous Polish book on Shakespeare – Jan Kott’s Shakespeare Our Contemporary – which served to describe the modern experience of history for a whole generation of readers. The author recalls the political context of Kott’s analyses, focusing on the notion of The Great Mechanism – its definition, evolution and a myriad of ways in which the Polish scholar exemplifies it. Rogacki also discusses Kott’s brilliant interpretations of Macbeth, The Tempest, King Lear and Hamlet as historical chronicles and points to the central role which Richard II plays in Kott’s thinking about Shakespeare. By drawing on both historical research (E. Kantorowicz) and theatrical practice, Rogacki suggests an interpretative perspective which employs elements of medieval „political theology”, most notably – the allegory of the two bodies of the king which, paradoxically, is still present within contemporary political thought and practice.