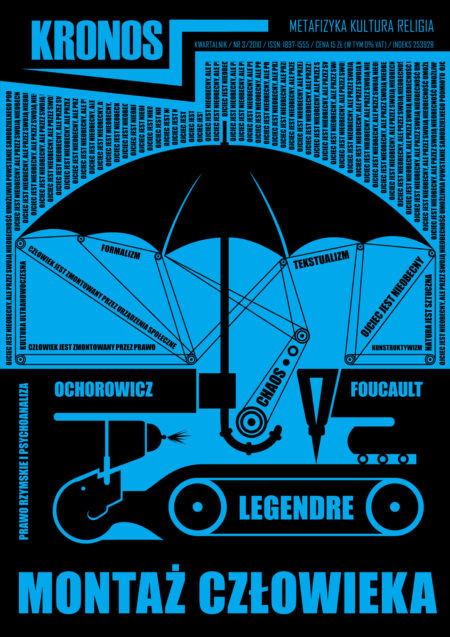 Spis treściEdytorialSummariesZAMÓWe-book
3/2010
MONTAŻ CZŁOWIEKA
Zofia Rosińska
Husserl and Freud: Spaces of Encounter
Zofia Rosińska poses questions about the similarities and differences in Freud’s and Husserl’s way of thinking about the methods of exploring the human psyche. Rosińska takes ‘method” in the broadest sense – as all the requirements which the scholar/scientist must meet in order to reach what may be called a cognitive result (i.e. scientific approach, honesty, neutrality). These requirements make it possible or “method” to function in its narrower sense as a strictly defined mode of study. Although Rosińska stresses the radical differences between psychoanalysis and phenomenology, she also point to certain similarities – among others: a) the fact that both authors reject the experimental mode of studying the human psyche in favor of “experience”; b) even if they call them differently, they define the rules governing the process of cognition in a similar way; c) both for Freud and for Husserl “depth” is the proper sphere of exploration; d) both direct their attention “backwards”.

Michał Piekarski
Wittgenstein and Freud, or Philosophical Therapy vs. Psychoanalytical Therapy
Michał Piekarski attempts to answer the question if anything and if so – what connected the thought of Ludwig Wittgenstein with Sigmund Freud’s psychoanalysis. Piekarski first discusses Wittgenstein’s critique of psychoanalysis as a pseudo-science which violates language and which does not comprehend the grammar of its own concepts. Next he analyses Freud’s and Breuer’s Studies on Hysteria and focuses on the notion of “the symbolic relation” or “the logical chain”. These terms indicate a complex network of psychic elements which may be interpreted as the structure of language itself – the order of signifiers. The psychoanalyst, just like the wittgensteinian philosopher-therapist, attempts to uncover the working of language which ultimately points to the mechanisms which generate thinking. Both thinkers believe that the mystery of mental disorders is bound up with the fundamental role of language and its place in culture.

Szymon Wróbel
Between Kinship and Estrangement: Three Tales of Man in Nature
Szymon Wróbel analyses three ways in which man’s relation to nature has been constructed. He makes use of texts the choice of which may seem arbitrary but is in fact carefully thought out. The first is Lewis Carroll’s Through the Looking-Glass in relation to which Wróbel discusses the way in which Alice construes “animality” (and thus also “humanness”). The same problem is then discussed on the example of Swift’s Gulliver’s Travels and Borges’s Fantastic Zoology. The claim that Wróbel makes is that the experience of nature which Alice has gained on the other side of the looking-glass is the infantile, pre-Enlightenment experience of “animality”; Gulliver’s experience, on the other hand, is that of a man of the Enlightenment – whose view were shaped by the theories of Hobbes, Descartes and Newton; finally – nature as experienced by Borges’s narrator is nature fully appropriated by culture (nature in culture rather than the other way around), the only sort of “nature” accessible to us in late modernity. An important element of Wróbel’s analysis is the attempt to locate – in each of the three paradigms – the place of “language”, both in “nature” and in “man”. Determining the limits of “language” means establishing a boundary between “humanity” and the (extra)human “zoo”.

Lena Magnone
The Birth of Psychoanalysis: Julian Ochorowicz and Sigmund Freud
Lena Magnone presents the views of the Polish pioneer of scientific psychology – Julian Ochorowicz. In the 1880s Ochorowicz lived in France where – just like his contemporary, Freud – he studied the possibilities of treating neurosis through hypnosis. He worked with Jean Martin Charcot at Salpêtrière hospital. Ochorowicz did not draw from Freud’s works (although many of his findings are similar to those of the famous founder of psychoanalysis) and attempted to formulate his own theory of the unconscious.