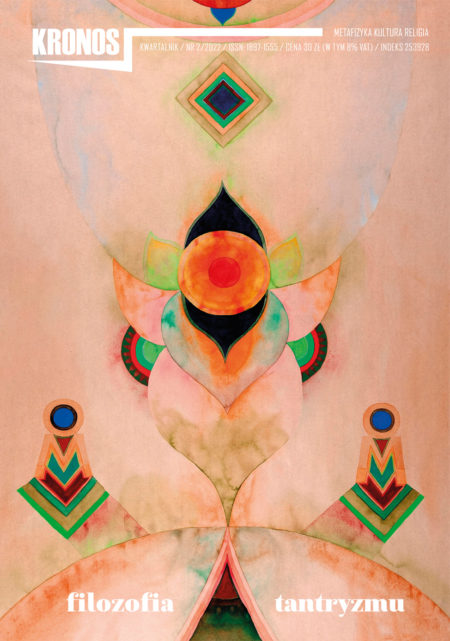 Filip Ruciński
A BHINAVAGUPTA, THE SIXTEEN AMRITARUDRAS – AN INTRODUCTION TO THE TRANSLATION
In his The Sixteen Amritarudras Abhinawagupta conducts a detailed exegesis of Parātrīśikā, a tantric text from the medieval tradition of trika – literally meaning ‘triad’ or ‘trinity’ – decoding the following mantra encrypted in the book: sauḥ (s -au -ḥ). Its three sounds, like an embryo, contain the formula and the potential of the entire reality – just like in the conception of Bhartrihari, where one syllable, akshara, reveals the whole world. The synthetic “containment,” the so -called sampuṭī -karaṇa, of longer sequences of thoughts and images as well as complex philosophy, in a short verbal formula, i.e. a mantra, or even in one syllable or sound, is a characteristic trait of medieval Agama texts, or tantras, and Parātrīśikā belongs in this category. In the Kashmiri trika tradition the Anuttara, denoted as the single vowel a, is the embryo of embryos and the foundation of all conscious being – of all forms of action and realisations, present in all mantras as the base of all expressions and states of consciousness.

Justyna Horbowska, Piotr Popiołek
SEXUAL POLARITY IN THE STUDY OF CREATION
In Coomaraswamy’s interpretation, the tantric doctrine of divine oneness in duality, includes an allusion to the Progenitor and to Nature – through the latter the Progenitor creates – as the masculine and feminine elements respectively, present in the Christian thought. According to Coomaraswamy, Nature in Hinduism is the equivalent of natura naturans – the term originally ascribed to Averroes who opposed it to natura naturata – and as such can be considered an equivalent of Creatrix, i.e. Magna mater. Thus, in Hindu thought the Devine Intellect as the spiritual, masculine active element could be identified with Nature seen as the active element but also the element that is directly delivering life, which is a feminine attribute. Referring to the One Reality (tad ekam) outside the context of the process of creation, the Vedic tradition seems to prove, in a singular way, the complete unity of contrary elements; it also devotes some attention to explaining the transition from Duality to Unity, and not just from Unity to Multiplicity.

Przemysław Piekarski
TANTRA OF THE LAYA YOGA
The school of Laya Yoga discussed in the article is called tantric for several reasons. Firstly, because of its strictly pragmatic character; secondly, because of its idea of the mystical nature of human anatomy. Further reasons include referring to its own class of revealed scriptures; the institution of the guru, a spiritual teacher, viewed as an incorporation of divine grace and the idea of the universal, sympathetic teacher; the line of tradition based on passing knowledge personally from the teacher to the student (paramparā), where the indispensable condition is a formal or informal initiation; the tantric ritual. The very word tantra comes from the Sanskrit root tan and means ‘to stretch,’ ‘to spread,’ ‘to extend,’ understood as the spreading, extension, continuity of consciousness. Tantrism may be defi ned as a religious and philosophical current which entered a relationship (based on mutual borrowings) with the emerging traditions of both the Brahmin orthodoxy and the currents straying from it. The article presents an outline of ontology necessary for an understanding of the essence of the tantric transformation.

Robert Czyżykowski
TANTRIC SEX – A CLASSIFICATION OF THE PHENOMENON
The last decades in the West have seen an increased interest in the so -called tantric sex an in tantra in general. Even though sexual aspects make for only a small portion of tantric traditions, in popular culture tantra and tantrism are unambiguously associated with the sexual sphere. The article is going to analyse two spheres identified for the purpose of this paper – the issue of using the bodily fluids generated in the sexual act, and the yogically controlled sexual act. The two are the main, though not the only ones, ways of approaching sexuality in tantra. Apart from the above -mentioned issues, the paper provides a synthetic perspective on sex in various branches of tantrism – in a way that is more technical than doctrinal, i.e. the article is an attempt at answering the question of the classification of various forms of eroticism within tantra; the text is not, however, an analysis of tantric language or ideo logy. The article’s purpose is not a discourse analysis of tantric literature or considering whether a given act should be read literally or symbolically. Instead, I am going to focus on instances where we are certain that a given phenomenon within tantra included real sexual practice.