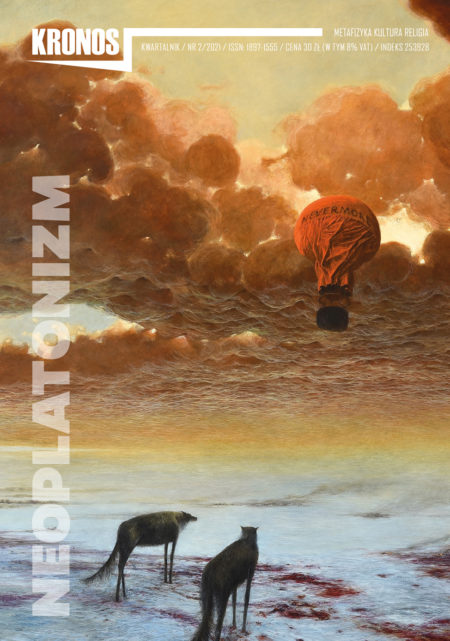 Antoni Ładziński
PHILOSOPHY, THEOLOGY, THEURGY IN THE THOUGHT OF IAMBLICHUS. A COMMENTARY TO BOOK I OF DE MYSTERIIS ÆGYPTIORUM
What is theurgy? Iamblichus clearly states that there are experiences that cannot be related in words. The entire Book I of De mysteriis is an attempt at showing the mutual relationships between the soul and the gods. First, Iamblichus shows the relationship of the soul with knowledge, with which the soul is one. Then we learn that it is also one with the gods, through a chain of intermediate categories of beings. The soul contains a certain divine element which is lifted or raised from the bodily level in prayers, when through μίμησις, ἐπιστροφὴ takes place. The gods in turn grant the body substance and power. What happens in theurgy? A reconstruction of the relationship between the intelligible and the heavenly deities. The theurgos – now transformed into a non-human – experiences the One.

Andrzej Serafin
AN INTRODUCTION TO PROCLUS' THEURGY
Some readers want to see the counterparts of theurgy in contemporary religious practices, such as tantra or the Kabbalah. Even though it enables us to explain Proclus' symbolism, related alchemical and hermetic symbolism, eventually it narrows the notion of theurgy. Indeed, its most radical interpretation, which Proclus himself promulgated, leads to the recognition that the symbol of sacrum is not this or that sign, text, gesture or rite, but the whole world. In this sense, the most radial contemporary theurgist is Heidegger, for whom, after the philosophical katabasis, the world “shines with divine light,” and the truth in the absolute sense appears as the world. If the philosopher's goal is “seeing the truth” (Parm. 136c), and “the eyes of the masses are too weak to look at it” (Soph. 254a–b), then in a theurgic act the philosopher deifies the world, and in the world's unconcealment the philosopher sees the truth, in the world – the truth's unconcealment. As Proclus' biographer Marinus of Samaria phrased it, “a philosopher should watch over the salvation of not only a city, nor over the national customs of a few people, but that he should be the hierophant of the whole world in common,” because, according to the Platonic tradition, “the temple most sacred and the worthiest of God is the world.”

Justyna Horbowska
INTRODUCTION TO THE TRANSLATION OF EXCERPTS FROM DAMASCIUS' ON THE FIRST PRINCIPLES
The aim of this article is to familiarize the Polish reader with the thoughts of the last diadochus of the Platonic Academy, Damascius, as well as to extract and present in contemporary philosophical discourse his observations on issues widely discussed by Neoplatonists, such as the principle of movement, the ontological foundation of the intellect, the complexity of being, and above all the conditions that should be met by the First Principle. These problems, among others, are discussed in Damascius' Απορίαι και λύσεις περί των πρώτων αρχών. A fragment of this work (preceded by a transposition) concerning the above-mentioned issues is the subject of this study. In my research work, I use the phenomenological and the hermeneutic methods.

Tomasz Stępień
DIVINE NAMES AND HIEROURGIA IN PSEUDO-DIONYSIUS THE AREOPAGITE
Among many of Pseudo-Dionysius the Areopagite's ideas that presented interpretation problems none is more mysterious than the issue of divine names. The reader of the treaty thus entitled realizes the divine names in question are not only names that man gives to God, but also seem to be something that separates the creation from (or rather, connects with) the completely transcendental Creator. The author of the article raises the question of understanding these names in the context of their role in man's path to becoming one with God. It transpires that for Pseudo-Dionysius the Areopagite the name plays a role similar to a beacon of power observed in the theurgic rites of the last pagan Neoplatonists. The Christian author adapts the concept to show that the Church's liturgy is a real rite unifying man with God.

Cezary Rudnicki
ON THE CONCEPT OF TRUTH
According to an acquired belief, certified by the authority of schools and age-old wisdom, the most important purpose of philosophy is the search for truth. Let us not forget that truth itself is one of philosophical concepts, or at least – that there is a thing called the concept of truth. It determines the way we think about truth, it determines, as the very term suggest, how we conceive of it. At the same time, the concept, like all concepts, can be analysed, subjected to criticism, elaborated on, and above all: de- and re-constructed; the effect of the last procedure is a transformation of our understanding of what truth is. A transformation or a shift of the way we experience some aspects of being as true. The subject of this article is a certain – never voiced explicitly – polemic, or rather, a certain reaction, a resonance that Martin Heidegger's writings have provoked in the thought of his ardent French reader Michel Foucault.