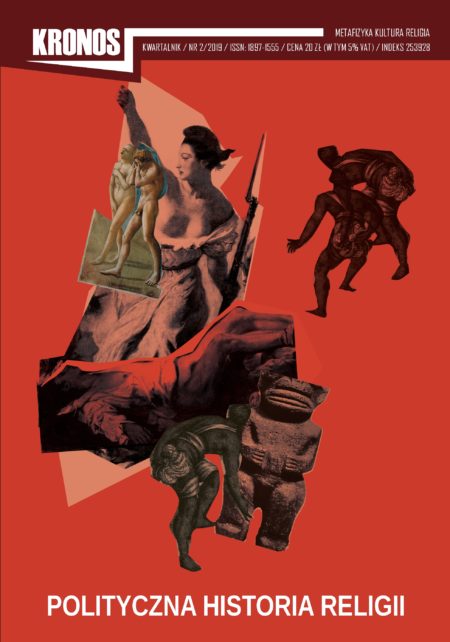 EdytorialSpis treściSummaryZAMÓWe-book
2/2019
Polityczna hitoria religii
projekt okładki:
Tomasz Bardamu
Michał Warchala
RELIGION, POLITICS, DISENCHANTMENT. MARCEL GAUCHET IN SEARCH FOR THE NATURE OF MODERNITY
Gauchet can be read and studied from different perspectives, and the multiplicity of these approaches is directly linked to an actual impossibility to classify him with any one scholarly discipline. One can treat him as primarily a historian and sociologist of religion; he can also be seen as a researcher of ideologies, especially totalitarianisms. We could, however, start with Gauchet’s history of psychiatry and its polemic stance to Foucault; or we could begin with his articles on education and its contemporary crisis. In all these fields Gauchet has either significant achievements or at least his opinion is heard, commented on and considered. Not being able to present all areas of his intellectual activity we will focus on the first which seems the most interesting one; it also seems to have provided the foundations for all of Gauchet’s thought. This is one of the reasons why the choice of presented fragments reflects the perspectives of history, sociology and philosophy of religion.

Robert Pawlik
THE FORMATION OF STATE AS A PROCESS OF SACRALISATION. ERNST H. KANTOROWICZ’S DISCUSSION WITH MAX WEBER AND CARL SCHMITT
The present paper aims at presenting The King’s Two Bodies’s author’s stance in the debate on secularisation. Kantorowicz is shown as an equal participant in the discussions that took place in Germany in the beginning of the 20th century. Main participants included the sociologist Max Weber and jurist Carl Schmitt. The choice of the two latter authors as Kantorowicz’s opponents is not accidental – the future medieval studies professor started his academic career with studying political economy at the University of Heidelberg. In his doctoral thesis on “[t]he nature of Muslim artisan associations,” defended in 1921, he demonstrated his knowledge of Max Weber’s concepts. Even though no equally direct proof of his acquaintance with Carl Schmitt’s writings exist, numerous arguments support the view that Kantorowicz must have possessed at least second -hand knowledge of Schmitt’s thought.

Eugenia Prokop -Janiec
(E)MIGRATION AND IDENTITY IN BRONISŁAW ŚWIDERSKI’S FICTION
In his fi ction Świderski offers a provocative analysis and an audacious narrativisation of the dialectics of (e)migration experience and its accompanying dialectics of identity. Świderski’s protagonists transform the emigré’s suffering caused by leaving a known world and the imigré’s shock of encountering a new culture into an opportunity for individual growth and personal autonomy. He rejects the consolation that Polish expatriate writers traditionally found in anchoring themselves symbolically in language. Instead Świderski postulates searching for “spiritual roots” in both one’s native tongue and in foreign languages. “Being solely Polish, only a Catholic or exclusively a Muslim I consider a dangerous situation,” he states, drawing a plan for “a new, non -national identity” and contrasting it with Polish culture that, in his opinion, has been “adverse to non -national experience.” At the source of his endeavours is the desire of going beyond any closed systems which are constrained by norms and values – towards multiplicity, growth, variations, “a conjunction of many identities.” In the most general sense one can regard this project as a variant of diaspora identities, defined by Stuart Hall as “those which are constantly producing and reproducing themselves anew, through transformation and difference.”

Tomasz Herbich
GOD AND MAN. ON THE PHILOSOPHY OF ZYGMUNT KRASIŃSKI
In the history of Polish thought there are few authors whose philosophical work would meet with such divergent responses as that of Zygmunt Krasiński. Among outstanding scholars and commentators of his oeuvre we can find both those who highly appreciate the philosophical dimension of his writings (Tarnowski, Zdziechowski, Straszewski) and those who – even when stressing the meaning of philosophical contexts (this is the case of only some of those critics) for the interpretation of his work – in their assessment of his philosophy remain more ambiguous, and often talk about his eclecticism and lack of originality or claim that his poetical worldview had an only indirectly philosophical nature (Kleiner, Chrzanowski, Janion). Was one of the most outstanding Polish poets, to quote Marian Zdziechowski, “one of Poland’s most profound philosophical minds ever”? Or should we rather agree with the opinion that “Krasiński was a philosopher only occasionally, but he was always a poet, and he always attempted to introduce his philosophical ideas into his literary work”?