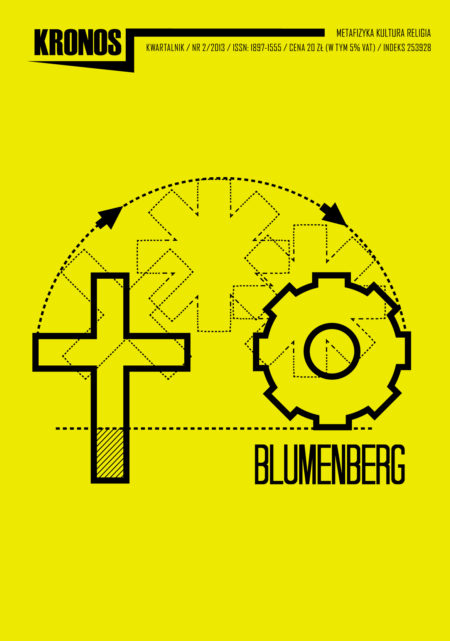 Tadeusz Zatorski investigates the notion of „secularization” in the thought of Hans Blumenberg. According to Carl Schmitt all the basic concepts of modern political science are secularized versions of theological concepts. This implies that the modern age has appropriated the Christian tradition and that it has no „legitimacy” as a separate chapter in the history of thought. Hans Blumenberg rejected this theory. He claimed that although modernity inherited certain problems from the previous age, it nevertheless strove to find original solutions to them.

Jean-Claude Monod
A RHETORICAL APPROACH OF POLITICS: BLUMENBERG’S PRINCIPLE OF INSUFFICIENT REASON AND ITS PASCALIAN CONSEQUENCES
In his essay Jean-Claude Monod points to the fundamental role which – according to Hans Blumenberg – rhetoric plays in constructing anthropology. Blumenberg, like Nietzsche, affirms rhetoric and its defining principle – the Principle of Insufficient Reason. He also points out that the ability to construct metaphors is the lifeblood of anthropology. Rhetoric in its anthropological aspect is connected with uncertainty and with the obligation to act. The importance which Blumenberg attributed to rhetoric led him to reject the Platonic notions of politics and statehood. Politics necessarily involves rhetoric and as such it becomes an arena in which various social practices and interests clash. Democracy, involving equal access to public debate, is the freedom to practice rhetoric.

Robert Pawlik
HANS BLUMENBERG’S METAPHOROLOGY
The task of philosophy has long been defined as establishing clear and precise concepts. This resulted in the philosophers’ deep mistrust of metaphor and rhetoric. However, the project to eliminate from philosophy all thinking that is not conceptual has failed. Hans Blumenberg believed that this failure stemmed from the fact that all concepts are constructed around metaphors which play a key role in our thinking even if we are unaware of it. Metaphorology – the historical investigation of philosophical metaphors as „substructures” of our thinking – was the new philosophical discipline postulated by Blumenberg.

Benjamin Lazier
OVERCOMING GNOSTICISM: HANS JONAS, HANS BLUMENBERG, AND THE LEGITIMACY OF THE NATURAL WORLD
Benjamin Lazier discusses the connections between Hans Jonas’s analysis of gnosticism and that of Hans Blumenberg, presented in his famous book Die Legitimität der Neuzeit. The author points out that although Blumenberg’s thought was greatly influenced by Jonas’s formulations, the philosophers differed in many important respects. Both believed that modernity was gnostic in its nature. Starting with the late Middle Ages, gnosticism – by replacing Hellenistic philosophy and appropriating its language and concepts – effectively separated man from the world and God from creation. There were three moments in the history of philosophy when attempts were made to overcome gnosticism. The first – as Jonas already pointed out – was made by Augustine; the second – by Bacon; and the third – as Blumenberg believed – by Jonas himself in the 1920s and 30s. Jonas saw the possibility of overcoming gnosticism in Aristotle’s concept of teleology, while Blumenberg – in the Nietzschean will to power.

Paweł Grad
MODERNITY ON TRIAL. THE CORRESPONDENCE OF HANS BLUMENBERG AND CARL SCHMITT
Focusing on the correspondence between Carl Schmitt and Hans Blumenberg, Paweł Grad analyzes the differences between the philosophers’ conceptions of modernity and secularization. Schmitt’s understanding of secularization was legalistic and normative, whereas Blumenberg’s was naturalistic and functional. These different approaches led the philosophers to conflicting views of history. Schmitt sees history in terms of the delaying of the Parousia and the remembering of the Revelation, and consequently he delegitimizes modernity. Blumenberg, on the other hand, treats history as a potentially infinite process of accommodating discourse to the changing circumstances, and thus functionally justifies modernity. Though their approaches are radically different, Schmitt and Blumenberg share a Gnostic vision of a mute and alien reality.

Paulina Sosnowska
POLITICAL THEOLOGY AND MODERNITY: HANS BLUMENBERG VS. CARL SCHMITT
In her essay Paulina Sosnowska discusses the main points of the polemic between Hans Blumenberg and Carl Schmitt which started after Blumenberg published his Die Legitimität der Neuzeit and led to a correspondence between the two philosopher’s after the publication of Schmitt’s Theologie II. Sosnowska focuses on the main aspects of the polemic: the status of Schmitt’s political theology and the consequences of its transformations; the conflict over the legitimacy of the modern era in the context of Schmitt’s philosophy of law; and finally, Blumenberg’s critique of Schmitt’s distinctions between friend and enemy as the basic political category.

Rafał Zawisza
„AGAINST UNEDUCATED DOGS”. HANS BLUMENBERG’S PROMETHEAN DEFENSE OF MAN IN WORK ON MYTH
Rafał Zawisza discusses the reasons for Hans Blumenberg’s hostility towards the anti-vitalistic tradition in Western thought – a tradition whose roots lie in monotheism. His critique is aimed, fi rst and foremost, at the monastic movement with its asceticism and condemnation of worldly and bodily pleasures. By contrast, Blumenberg’s anthropology is a promethean defense of creative excess without which human life would be impossible. The development of natural science and the technological mastery over the world are supposed to lead to the final overcoming of gnosis (cosmological and anthropological dualism). In his attack on the Judeo-Christian tradition Blumenberg rejects both theology and philosophy of history, and opts for epicureism as the „art of life” which takes account of the finitude of human existence. The price, however, which the German philosopher has to pay for this choice seems to compromise his promethean defense of man.

Bartosz Kuźniarz
ON THE POWER OF THINKING. A PSYCHOPOLITICAL ANALYSIS
Contemporary radical politics has been troubled by the experience of impotence. Many thinkers complacently ascribe this to external factors: the social structure, the capital, the system, the military-industrial complex etc. The author argues that the impotence stems rather from a deeper lack of human thinking, labelled long ago by Christian theology as sin. “What I want to do I do not do, but what I hate I do”, sounds the famous complaint of St. Paul in the Letter to the Hebrews. But insofar as the Christian name for deliverance from sin is “grace”, the philosophical remedy for impotence of thinking can be the thymotic element excavated from the Greek epics and the Platonic theory of soul in Peter Sloterdijk’s Rage and Time.

Andrzej Wawrzynowicz
KONSTANTY DANIELEWICZ’S PHILOSOPHY OF THE WILL
The essay presents one of the most original, though virtually unknown, Polish thinkers of the fi rst half of the 19th century – the Hegelian Konsatnty Danielewicz (1809-1842). Andrzej Wawrzynowicz discusses the sources of Danielewicz’s philosophical inspiration, the key elements of his theory, and offers an evaluation of the Polish philosopher’s work as a whole, focusing on the project of the philosophy of the will as a form of radical polemics with Hegel’s absolute idealism.

Bartosz Wójcik
MAREK SIEMEK AS A HEGELIAN. THE PHILOSOPHICAL SELF-KNOWLEDGE OF MARXISM
In his essay Bartosz Wójcik discusses Marek Siemek’s Hegelian reading of Marxism. In his work, Siemek exposed the deep, though often unrealized, dependence of Marxism on Hegelian thought. This is particularly true with regard to Marxism’s efforts at working out its own theory of philosophical self-knowledge. Wójcik focuses on Siemek’s interpretation of Marxism’s attempts to overcome its philosophical status. He distinguishes three problem fields: philosophy and self-knowledge; practice and cognition; politics and society. By analyzing the relationships between them, he also points to an evolution of Siemek’s own thought: from Marxism to „transcendental social philosophy”.