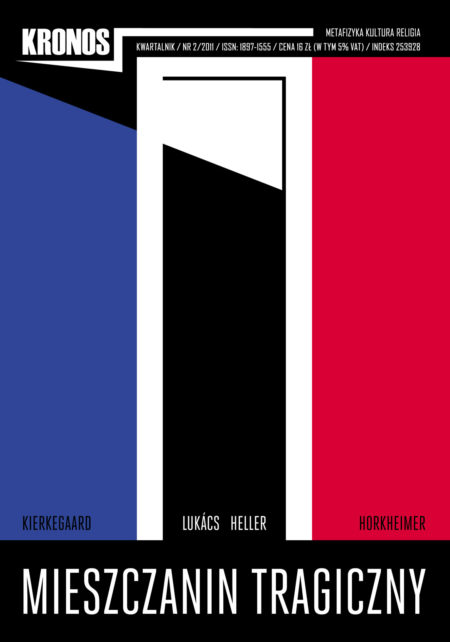 Spis treściEdytorialSummariesZAMÓWe-book
2/2011
MIESZCZANIN TRAGICZNY
Ágnes Heller
The Autonomy of Art or the Dignity of a Work of Art?
Ágnes Heller asks about the possibility of employing in aesthetics two categories derived from Kant’s ethics: autonomy and dignity. The idea of the autonomy of art developed within Modernism and its aim – according to Heller – was to defend high art against the emerging mass culture. Heller believes that today, after the collapse of the modernist project, dignity rather than autonomy is the more appropriate term to describe the individual work of art. It should be conceived in Kantian terms, i.e. the work of art should not be treated as a mere means to an end, but also as an end in itself. Heller thus rejects two arguments levied against any inherent dignity of the work of art: one which reduces it to a simulacrum (caused by mechanic reproduction) and the other – to a commodity.

Piotr Graczyk
The Modern Ecclesiastes
Piotr Graczyk’s essay is intended as a polemic with Ágnes Heller’s belief that we cannot move beyond the world of modernity, i.e. the free market, the unhampered development of science and the ever-renewing sphere of the political. Graczyk points out that there is something threatening in this inability of ours to transcend freedom – a freedom which is not really for us, but serves the anonymous powers of the marketplace, science and politics. It becomes clear when one considers the ambivalent character of the metaphors employed by Heller – for example: of modernity both as a home and prison.

Grzegorz Słowiński
The Triumphant Dr Faustus
Grzegorz Sowiński analyzes the figure of Dr Faustus as portrayed in one of the earliest versions of the legend. Sowiński offers a phenomenology of the character, focusing on the moment of his confrontation with nothingness – understood both as an existential void and a magic power capable of annihilating every phenomenon and even meaning as such. Sowiński also points to the Christian element in Faustus’ identity and supports his observations with Heidegger’s comments on Christianity found in the German philosopher’s discussion of St. Paul’s letters. It turns out, however, that perhaps the best way to grasp the figure of Faustus is through the character’s self-reference which escapes both phenomenological and psychological explications, and can only be understood in terms of a dialectic of grace. The last part of the essay is an attempt to somehow place Faustus in the general scheme of the merciful Creator.

Krzysztof Okopień
An Afterword to Plato
The answer to the question „who / what was Plato?” immediately forces us to face a more general question concerning the philosopher and philosophy as such. We were taught to think of Plato as a dualist, but what in fact is Plato’s dualism? Is it merely a distinction between two different sorts of being? As Krzysztof Okopień notes, philosophy itself is dualistic – seen both as wisdom and madness. What is more, wisdom incessantly becomes madness, and vice versa. This basic opposition implies others: “rational / irrational”, “logos / mythos”, “philosopher / sophist”. But these oppositions, which are said to found Platonism, are illusory. Within the vortex of the Platonic dialogue they become blurred which is most clearly visible on the example Plato’s ambivalent attitude towards myth. Philosophy becomes its opposite: an anti-philosophy which nourishes philosophy and consists its raison d'être. In this sense philosophy is governed by the logic of conflict and Platonism itself turns out to be a deconstruction, a permanent, futile search of its own origins.

Piotr Nowak
On Gogol, Bernhard and the Category of Recognition
We live in a world whose order relies on power and a fear that the order might crumble. Within it recognition is wholly arbitrary, connected to social hierarchies and power. This is equally true in the case of government officials, priests, scientists, judges or doctors – it is true whenever we are aggrandized thanks to a “largeness” not our own. This, it may seems, is precisely what Nikolai Gogol’s work was all about. This was definitely the way he was read by 19th century Russian critics such as Belinsky for whom Gogol’s main intent was to ridicule the old hateful political regime. According to Piotr Nowak, however, this approach is insufficient. Akaky Akakyevich of The Overcoat, just like Melville’s Bartleby, is not simply a figure of fun. Both characters represent those who do not, who cannot understand the social rules of recognition: in their presence the world as we know it is turned upside down. They alter reality by the power of their weakness, they expose the “semantic nihilism” which underlies that reality. Thus, they provoke a “revenge” – first a social, then a literal death. But apart from the socially enforced recognition there exists a sphere of freedom in which one is free to spontaneously recognize whomever one pleases on the basis of disinterested and deeply personal criteria. Such recognition takes place “far from the madding crowd”, apart from social and political competition – it never becomes habitual and allows for the existence of genuine authority.

Marta Olesik
Paradox, or Dialectics in a Nutshell. A Kierkegaardian Way of Dealing with Hegel
Marta Olesik reconstructs the system underlying the Kierkegaardian concept of paradox. It is a system in the “literal” sense: a worldwide network of relations sharing a common subject. The subject in question, according to Kierkegaard’s novel formulation, is the finite individual. Its survival depends on its ability to construe a system alternative to that of Hegel’s. Paradox is not the irrational fetish for which it is taken to be by those who see Kierkegaard primarily as a mystical subjectivist. This arch-enemy of Hegel’s knew that subjectivity is necessarily inscribed within the Absolute: any attempt to withdraw into subjectivity is an abstraction (in the Hegelian sense) and as such is absorbed by the system. The only solution therefore is to abolish one’s subjectivity and to surround oneself with the protective wall of reality so that the Spirit can no longer subordinate the individual to the system. The question is, however, how to construct an infinity of mediations if one remains a finite, limited subjectivity. It needs to be contained within a given contradiction so that its sublation can be achieved by the individual.

Bronisław Świderski
How a New Theory is Created, or – Kierkegaard’s Anti-Semitism
Bronisław Świderski’s essay is a polemic with Peter Tudvad’s book Stages on the Way of Anti-Semitism: Søren Kierkegaard and the Jews. Tudvad discusses in detail the Danish philosopher’s anti-Semitism drawing both from his works and biography. His book inaugurates a discussion of a heretofore unvoiced problem of Kierkegaard’s attitude towards the Jews. Świderski attempts to defend Kierkegaard against Levinas’ accusation that his views largely corresponded with those of national socialists. He points to the sources of Kierkegaard’s ant-Semitism, but at the same attempts to explicate his understanding of “Jewry” and rejects as too radical Tudvad’s claim that Kierkegaard was a thorough anti-Semite.

Magdalena Gawin
Gender and Socialism: The Case of Kazimierz Kelles-Krauze
Magdalena Gawin analyzes the model of equal rights for women as presented in the writings of Kazimierz Kelles-Krauze – the most distinguished theoretician of Polish socialism, a Marxist and a renowned sociologist. Kelles-Krauze’s views developed after he had emigrated to France where he studied at the Sorbonne in the 1890s. His attitude towards organized international movements promoting women’s rights was ambivalent, not to say – critical. He believed that women do not form a uniform group, but a highly antagonized one in terms of class, nationality and politics. Although women are excluded from politics (being denied the right to vote) and are socially handicapped in many ways, Kelles Krauze insisted that gender as such cannot be treated as a political category.

Tadeusz Gadacz
Is Being Evil? The Experience of il y a and escape in Levinas
Tadeusz Gadacz’s essay deals with the question of being and its meaning in the perspective of Emmanuel Levinas’ concept of escape. When asking about being we do not pose an ontological question but an ethical one. We always have to ask about being in the context of the question about the good or what Levinas calls “the justice of being”. In order to find an answer, we have to withdraw from being – escape from it – towards the Other. However, the relation between doing good and escaping from being is a dialectical one. How do they relate to one another? Is it at all possible to ask about being?

Aleksander Temkin
The Two Souls of Solovyev
Aleksander Temkin points to dichotomy inherent in Vladimir Solovyev’s opus magnum – The Justification of the Good. Solovyev’s historiosophy oscillates between an evolutionistic optimism and a Gnostic terror in face of the fallen nature of the world. Temkin focuses on the latter in the context of Solovyev’s critique of Tolstoy and his engagement with Kantian ethics. In his polemic with Tolstoy Solovyev takes the liberal-apocalyptic stance which Temkin sees as opposed to Nikolai Berdyaev’s “Russian Idea”. Solovyev’s disagreement with Tolstoy’s moralization of religion prompts him to attempt a reformation of Kantian ethics. It is – according to Temkin – a failed attempt. However, the author points to a number of ways in which the impasse in which Solovyev found himself could be overcome.