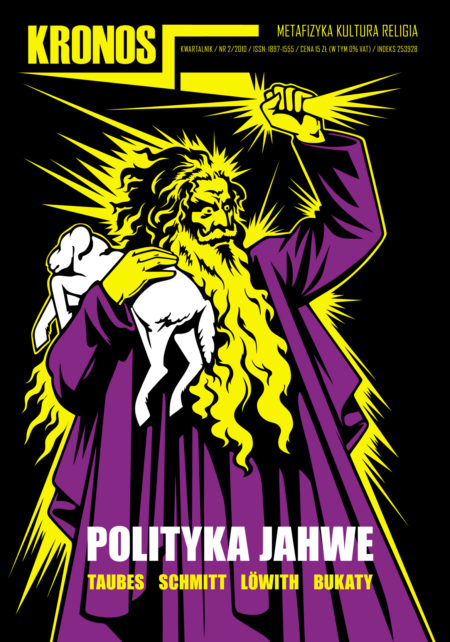 Spis treściEdytorialSummariesZAMÓWe-book
2/2010
POLITYKA JAHWE
Arkadiusz Górnisiewicz
Comprehending Modernity. An Introduction to Karl Löwith’s Thought
The essay interprets the thought of Karl Löwith against the background of his confrontation with modernity. The article aims at illuminating the connection between the major themes in Löwith’s works: the secularization thesis, the problem of European nihilism and the history of human experience of the world as a cosmos. In Löwith’s critique of modernity, “political existentialism” (ascribed to Schmitt and Heidegger) seems to be the reverse side of the demise of the cosmos as an orderly and meaningful whole by which men can take their bearings. The dismantling of the cosmos as understood by the natural theology of the Ancient Greeks and the supernatural theology of Christianity accounts in Löwith’s view for the intensity of the modern historical process.

Paweł Armada
Leo Strauss, or Overcoming Modernity
In his essay Paweł Armada highlights certain aspects of Leo Strauss’s thought which may help to understand Strauss’s intellectual involvement with Karl Löwith. In his letters to Löwith Strauss did not present (at least in any direct manner) his understanding of the theologico-political problem which is crucial to his treatment of modernity. Strauss’s view of the confrontation between philosophy and law determines his radical assessment of the contemporary philosopher’s situation. However, Strauss’s well -known interlocutors usually did not accept his way of thinking about philosophy. Armada suggests that although Strauss and Löwith are both critical of the modern political order, on a deeper level of reflection they differ in many important respects.

David Janssens
The Philosopher’s Ancient Clothes: Leo Strauss on Philosophy and Poetry
The essay considers the three basic tensions in the work of Leo Strauss: 1) between Athens and Jerusalem, or reason and revelation; 2) between the Ancients and the Moderns; 3) between philosophy and poetry. Janssens argues that the third tension deserves more attention than it has received so far. The purpose of his essay is to draw our attention to the importance of ancient poetry for Strauss’s understanding of the art of writing of the classical philosophers. According to Janssens Strauss treated the third problem no less seriously than the others. He argues that Leo Strauss became increasingly doubtful whether a quarrel between poetry and philosophy really existed (as famously declared by Plato). The main argument is that ancient philosophy is fundamentally indebted to ancient poetry.

Heinrich Meier
Why Leo Strauss? Four Answers and One Consideration Concerning the Uses and Disadavantages of the School for the Philosophical Life
Heinrich Meier lists the reasons why reading Leo Strauss’s books is worthwhile, pointing at the same time to the meaning of the controversy which arose in connection to the so -called School of Strauss. In Meier’s opinion the proper, philosophical reading of Strauss must go beyond the interpretations offered by Strauss’s pupils. The author presents Strauss as one of the most significant thinkers of modernity who fully grasped the political and intellectual consequences of practicing philosophy in the Socratean spirit. The essay revolves around the four major characteristics of Strauss’s thought: 1) his fruitful insight into esoteric writing; 2) the renewal of the concept of philosophy as „a way of life“; 3) the emphasis on the primacy of political philosophy; 4) the recognition of the so -called theologico-political problem.

Ewa Atanasow
Patriotism in Democracy: Tocqueville’s View
Does democracy need patriotism, and if so of what kind? Tocqueville’s ‘Democracy in America’ elaborates an answer to these questions, thus offering an instructive contribution to the debate about the role of patriotism in liberal democratic society. For Tocqueville all societal orders are anchored in a form of patriotic loyalty that legitimizes the institutions and motivates civic dedication. In advancing a typology of patriotic allegiance, Tocqueville poses the question of the proper object and modality of democratic patriotism. In his view, modern democracy requires a dynamic form of civic attachment that combines respect for political principles and universal rights with loyalty to the particular community that protects them. Through close textual analysis this essay seeks to lay bare the complex psychology that underpins Tocqueville’s account of patriotism in democracy.

Bronisław Świderski
First and Last. The Implications of a Certain Concept
Bronisław Świderski analyzes the intellectual situation of Poles who left the communist realm in 1970 and quite unprepared faced the theoretical discourse of the West. Especially the concepts of rationalism and rationality proved ambiguous. In the works of Polish scholars they were strictly tied to Marxist thought, while Western thinkers usually associated them with non - or even anti -marxist approaches. “Polish” rationalism presupposed the existence of two mutually hostile types of social and philosophical knowledge (granted that “Socialism was locked in a life and death struggle with Marxism”). The essay presents the way in which the abovementioned concepts evolved in the works of Polish scholars, focusing mainly on Zygmunt Bauman. The Western thinkers are represented by Max Weber, Victor Turner, Steven Lukes and Alfred Schütz.

Michał Otorowski
Antoni Bukaty, a Messianist par excellence
Antoni Bukaty (1808 -1876) was a colorful, though today quite forgotten fi gure of the Great Emigration. He was the inventor of the tank and of the idea of armored warfare, and at the same time a great enthusiast of Józef Hoene Wroński’s messianic philosophy. Michał Otorowski discusses Bukaty’s main work, Poland in Apostasy and Apotheosis (1842). Bukaty’s thought, although closely connected to “wronskianism” and at times quite eccentric, is not without its merits. Especially revealing is Bukaty’s analysis of contending views on Polish identity. Bukaty claimed that certain individual human values may be the ultimate cause of the demise of particular polities, only to be appropriated by the victors and refashioned into universal values which make the general progress of mankind possible. However, his claim was not simply that Poland as the bearer of the standard of freedom had to lose its statehood in order for freedom to thrive among the nations of Europe. He also believed that Poles, due to the traumatic experiences of recent history, are endowed with a unique social energy which may give a new impulse to mankind. He believed Poles capable of a civilizational advance the aim of which was what today is known as the welfare state and what Bukaty himself saw as the realization of the messianic program of Hoene Wroński.