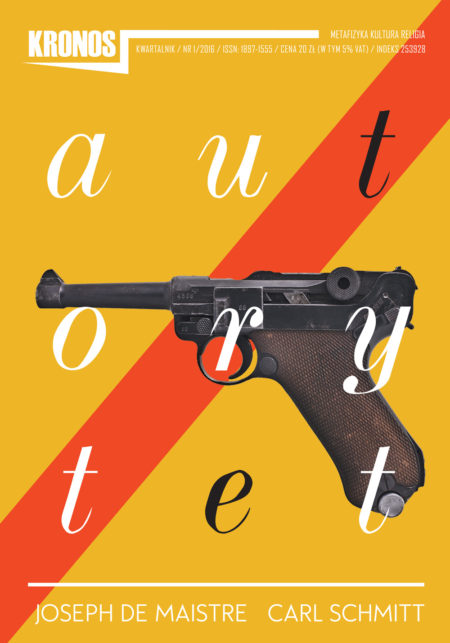 The idea use The Manuscript Found in Saragossa to interpret de Maistre’s thought may seem bizarre: even the influence of the philosopher on the novelist is largely ignored today. At first glance, the two men had nothing in common. But first glances can be misleading. In fact, Potocki and de Maistre not only met in bleak St. Petersburg, but they recognized in each other a fellow soul, a rare bird amid the mediocrities of the salon.

Paweł Grad
DE MAISTRE, OR SPECULATIVE TRADITIONALISM
Paweł Grad presents Joseph de Maistre as a political metaphysician of the era of nihilism. Thus, de Maistre is shown to be not only an inherently modern thinker, but also one entirely different from most conservatives of the period. His modernity consists in his clear definition of the problem of constitution, i.e. the problem of justifying the onto -political order in view of the lack of ultimate grounds. Therefore, de Maistre’s significance is not limited to an extravagant justification of “reactionary” social institutions (monarchy, the executioner, the Inquisition). What makes him different from most conservatives is that he is not a nihilistic conservative – someone who accepts the metaphysical groundlessness of the existing order but justifies it in functional (sociological, psychological) terms. Instead, de Maistre offers a speculative, radically metaphysical justification of the onto -political order as inevitably emerging out of the chaos of entirely contingent historical events.

Piotr Nowak
THE REVOLT OF THE ELITES
Elections have long ceased to be a mechanism of selecting and promoting a certain political elite. They have degenerated into a mock “plebiscite” of sorts the aim of which is to appoint a couple of hundred of representatives who in turn nominate people of their choosing to more or less important positions. New elections always announce a season of foraging: for sinecures, privileges, money and influence. At the same time, the people are mute: they do not express any sensible views on how important problems should be dealt with. This is the meaning of mass democracy and there is no other sort: any other understanding of the term is inappropriate, irrelevant. It is no wonder that within mass democracy the plebiscite is seen as the only accepted form of legitimization. Mass democracy, whose impetus is not checked by any barriers, for example the will of the president or the government, leads towards a sovereign dictatorship, or – to put it bluntly – Leninist dictatorship. Why are courts of law unable to make decisions concerning the most important issues? Because their auctoritas is weaker than that of the president or the government. A state which tries to legalize or delegalize every possible aspect of social life is a totalitarian one. The weaker the state, the more burdensome and unpredictable are its actions towards ordinary citizens. At the same time, political parties only instrumentalize legality and legitimacy; their attitude foments a civil war, first a cold one, but later, inevitably, a hot and bloody one. Piotr Nowak discusses these issues in reference to two books by Carl Schmitt: Constitutional Theory and Legality and Legitimacy.

Kinga Wudarska
JOHANNA KENDZIORA – CARL SCHMITT’S DISCIPLE
Kinga Wudarska presents the figure of Johanna Kendziora who studied under Carl Schmitt when he was a lecturer in Berlin. The essay discusses both their personal and intellectual relationship, and analyzes Kendziora’s doctoral dissertation on the role of political parties in liberal systems. Wudarska refers Kendziora’s work to ideas which Schmitt worked on at the time, pointing out differences between the approaches adopted by the teacher and his disciple.

Robert Pawlik
EUROPE BETWEEN VIRGIL AND MARCION
In his most famous book Remi Brague poses the following question: What are the roots of European identity? In his answer, Brague points to Rome. What he has in mind, however, is not imperial Rome, “sparing the defeated and warring down the proud”, but its opposite – traditionalistic and epigonic Rome (imitating foreign, mostly Greek, ways). Roman conservatism, says Brague, lies at the heart of Europe’s deep respect for tradition without which Europe could never have been so creative. The greatest danger lies in the conviction that Europe should rely only on itself, looking solely towards the future and novelty. The problem is that ever since the 17th -century quarrel of the ancients with the moderns this is how modern self-awareness has come to be defined. Brague therefore sees modernity itself as harmful, calling it a “cultural Marcionism” which stifles creative vitality.

Krzysztof Tyszka -Drozdowski
THE WAVES RECEDE IN COIMBRA
Aleksander Trzaska -Chrząszczewski believed that history runs in circles, or – as he put it – history has its tides and fl ows. The tides are explosive moments when the people become excited and their instincts are let loose – it is then that communities change the world and politics becomes mass politics. Two sides confront each other – one hostile to the status quo, the other attempting to preserve it – and mobilize the masses. But as life goes on, subversive ideas pale and the revolutionary zeal burns out. As the flow of history begins, political passions cool down and societies become inert. After the revolutionary upheaval comes the time of setting things in order. The interest in public affairs weakens and the those who find themselves in power are given free rein.