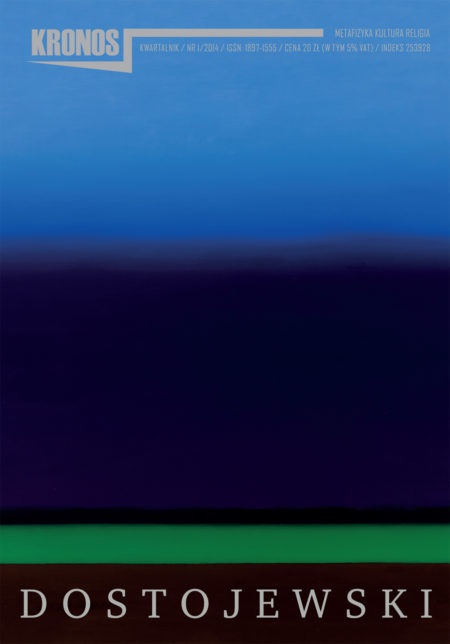 In his essay Bibichin analyzes the complex personality of Vasilii Rozanov, focusing on the last days of the philosopher’s life. He compares Rozanov’s life with that of Florenskii, pointing to their different attitudes which, nevertheless, led both of them to a tragic end (the execution of Florenskii and Rozanov’s starvation). Bibichin then goes on to discuss the extraordinary power of Rozanov’s literary voice. Utterly exhausted physically, Rozanov – in a triumph of mind over matter – continued to write and, when he was too weak to wield the pen, to dictate his thoughts. In the second part of his essay Bibichin analyzes Rozanov’s first book, stressing the overall coherence of the Russian philosopher’s work.

Olga Siedakowa
FAILED EPIPHANY: TWO CHRISTIAN NOVELS – THE IDIOT AND DOCTOR ZHIVAGO
In her essay O. Siedakowa compares two novels – Dostoyevsky’s The Idiot and Pasternak’s Doctor Zhivago – and claims that the latter engages in a polemic with the former. Both novels, according to Siedakowa, deal with the problem of Christian epiphany in the modern world. Analyzing the views of Dostoyevsky and Pasternak, Siedakowa points to the different ways in which the authors construct the Christ -like protagonists of their novels. For Dostoyevsky, epiphany is a divine occurrence, it points to a transcendent realm; for Pasternak – it occurs within the sphere of the commonplace, it is a transformation of the ordinary into the divine.

Michał Okłot
DISSECTING THE TOAD: UNPACKING SHESTOV’S THOUGHT ON GOGOL VIA ROZANOV
The question of Nikolai Gogol’s (1809–1852) alleged ‘realism’ has had a long history in Russian criticism, ever since the first responses to his art, including those of Vissarion Belinskii (1811–1848). From the last decade of the nineteenth century this debate continued, but in most cases on the theological or aestheticized -existential -biographical ground characteristic of Russian Symbolism. Lev Shestov’s (1866–1938) scarce responses to Gogol seem to go in a different direction, restoring the immediate context of Gogol’s art, i. e. – its engagement with the Romantic philosophy of nature and its artistic representation. Michał Okłot’s article is an extensive commentary on Shestov’s thought on Gogol, and on its indebtedness to, and development of, Romantic aesthetics. Two detours of the commentary lead through Pavel Florenskii (1882–1937) and, particularly, Vasilii Rozanov (1856–1919), whose responses to Gogol are shown to deepen Shestov’s thought.

Aleksander Temkin
PORFIRY PETROVICH, OR THE SPARE CONSCIENCE OF A CLERK
Aleksander Temkin discusses the conditions of moral action as presented in Dostoyevsky’s work. He points out that although the actions of Dostoyevsky’s protagonists cease to be their own, regaining genuine responsibility is nevertheless possible through imitating and appropriating guilt. The figure of the clerk – interpreted as an external or spare conscience – becomes an important element in this process. The essay describes the concept of theocratic bureaucracy and presents the character of Porfiry Petrovich as both a saint and a modern Pontius Pilate. The underlying irony of this point of view suggests that we can imitate ourselves in our bureaucratic consciences only by imitating Christ.

Piotr Nowak
“FEED US FIRST AND THEN COMMAND US TO BE VIRTUOUS!” THE FUNCTION OF LYING IN THE WORK OF DOSTOYEVSKY
The sadness and perspicacity of Christ, as well His awareness of the power of the Antichrist, were the result of His disbelief in man, which – in turn – was the reverse of man’s disbelief in the supernatural existence of the Savior. These elements of the Christian way of experiencing reality – this doubt and uncertainty as to the fate of man and God in this world – are ineradicable. They are the result of the gift of freedom; a gift which may be used profitably and beautifully, but which can easily be squandered or rejected.

Tadeusz Nasierowski
I REFUSE TO BE A FACE OF STONE
1 September 1939 is a symbolic date not only in world history but also in the personal history of Vaslav Nijinsky. When Poland lost its independence, Nijinsky – as a person suffering from mental illness and hence “expendable” according to the fascist ideology – faced imminent death. What saved him was “brotherly love” which many commentators, however, see only in terms of a “happy coincidence.” Nijinsky – like many people at the time – was faced with the evangelical choice of “yes, yes – no, no” – the choice between brotherly love and death. He chose love, the essence of life. He did so consciously, before succumbing to his illness. Ten years of brilliant creativity, as well as the subsequent efforts of Nijinsky’s sister to preserve the memory of her brother, made him a legend of world culture.