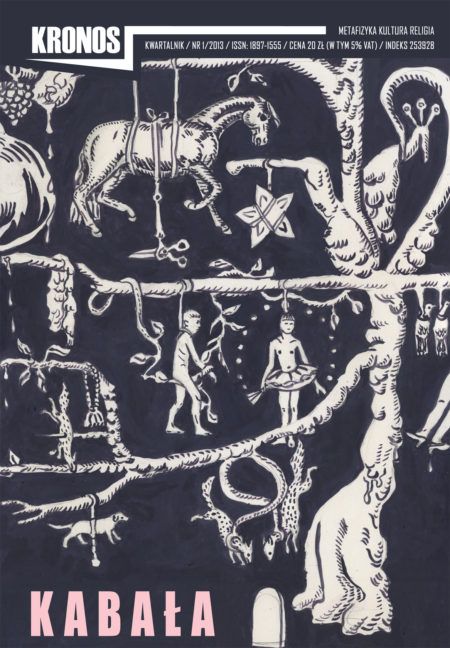 The article is an introduction to the Polish translation of Menasseh ben Israel’s Compendium kabbalae and the fragments of Adumbratio kabbalae christianae attributed to F. M. van Helmont. Michał Otorowski presents the Christian Kabbalah as resulting from a scientific approach to Biblical Revelation and as a practical tool of political messianism. Otorowski explains that the project of the Christian Kabbalah failed because science started to be defi ned in a new way after it had become separated from religion. Another reason was that in the 18th century the Christian Kabbalah degenerated intellectually. The thinker who at that time attempted to revive the kabbalistic project by offering an existentialist interpretation of it was Jan Potocki.

Jan Doktór
THE CREATION AND RECEPTION OF THE „BOOK OF THE BRIGHTNESS”
When the text of the Talmud emerged, two ways of interpreting it in a non -literal way were proposed. The first was the philosophical approach of Maimonides; the second – the kabbalistic reading of Nahmanides. These non-rabbinical interpretations caused an uproar within Jewish communities. The controversies eventually led to the creation of Sefer ha-bahir (“Book of the Brightness”). It is uncertain whether this is the first kabbalistic text but without a doubt it is the one which had the greatest impact. It was admired and criticized in both Jewish and Christian circles and although many Latin translations of the book were made, neither of them were published for a long tie. This is surprising because many lesser cabbalistic treatises were printed in Latin. It was only in the middle of the 18th century that the text was finally published in Amsterdam due to the efforts of Polish Jews.

Bohdan Kos
UNITY AND MULTIPLICITY IN THE „BOOK OF THE BRIGHTNESS”
The aim of the Kabbalah is to find a link between unity (God) and multiplicity (the Creation). The “Book of the Brightness” achieves this in its own way by resorting to the Trinity which eschews the dualism of good and evil. At the same time, however, the book does not reject dualism entirely. Its originality consists in the fact that it points to a hidden dualism within the Torah and the history of Revelation. It does so by introducing the notion of repetition, i.e. a particular form of doubling. Repetition sustains and strengthens being. This idea is embedded in the very grammar of the Hebrew language. Also, the act of creation depends on repetitions – corrections, refinements or amendments. The history of Salvation is also based on a dualism – that of the beginning and the end. God by modifying his Creation engages in an act of repetition. That is why the “Book of the Brightness” calls Him the Artist-God.

Michał Otorowski
ADOLPHE FRANCK, OR THE ULTIMATE END OF THE CHRISTIAN KABBALAH
Adolph Franck’s book La Kabale (1843) is regarded as the first modern presentation of Jewish mysticism. However, Franck’s work depends on a Romantic understanding of the esoteric tradition – it redefines modern conspirationalism along the lines of Hegel’s understanding of the history of philosophy. This is especially evident in the last chapter of the book (presented in Polish translation in this issue of “Kronos”) which is devoted to the Persian roots of the Kabbalah and its subsequent development. In Franck’s opinion the essence of the Kabbalah is identical with that of the project of absolute philosophy. Therefore the historical significance of Franck’s book consists not so much in its scientifi c or academic characters, as in the fact that it inaugurates a new phase in the European reception of Jewish mysticism.

Michał Otorowski
JAN POTOCKI’S CHRISTIAN KABBALAH
Jan Potocki was a religious thinker and Christian Kabbalist. Michał Otorowski discusses a chapter from Potocki’s famous novel, The Manuscript Found in Saragossa, in which a dialogue between a naturalist and a theologian is presented. This dialogue was based on an actual colloquy between Potocki and Joseph de Maistre. The antagonists debate whether miracles and Revelation can serve as the cornerstone of the Christian tradition which Potocki treats historically in opposition to de Maistre’s dogmatic approach. We are not dealing, however, with a simple quarrel between an Enlightenment thinker and a staunch defender of Catholicism. Potocki considers the theological aspects of a religion based on the faith in historical events. He juxtaposes the concept of God as an almighty Power demanding blind obedience to that of God as Providence acting in the world through deeds which “seem merely human”. At this point the Kabbalah serves as a model of tradition and the way it is presented in The Manuscript suggests that Potocki reads it in the spirit of reconstructivism which sees man as participating in the process of ameliorating the created world.

Michał Otorowski
TOWIAŃSKI – A POLISH TZADIK? STANISŁAW PIGOŃ GRAPPLES WITH THE SYMPOSIUM
The impact of the Kabbalah on Polish Romanticism is a well -known fact and was considered as early as 1923 in Stanisław Pigoń’s article about Towiański’s Christology. This interesting problem, however, has never been thoroughly examined. In his essay Michał Otorowski offers an explanation of this state of affairs. By critically examining Pigoń’s article he tries to determine whether it can still serve as a valid source of inspiration for modern scholars, or whether it is too much comprised by its misconceptions about the Kabbalah and the way it infl uenced Romantic thinkers such as Towiański.