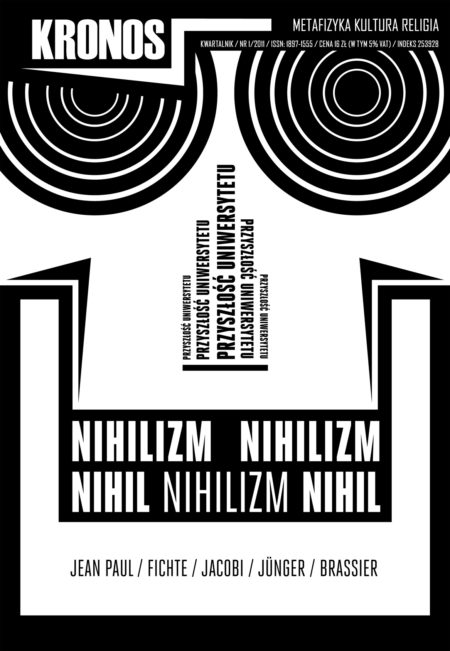 Spis treściEdytorialSummariesZAMÓWe-book
1/2011
NIHILIM
Leszek Augustyn
Weakness and Power: A Diagnosis of Russian Nihilism
Leszek Augustyn discusses Russian nihilism in the context of Siemion L. Frank’s views. He presents Frank’s understanding of the sources of modern nihilism and conducts his analysis in the following order: the Russian reinterpretation of Nietzsche’s thought; nihilism and the “intelligentsia”; nihilistic sources and the character of utopianism; finally, bolshevism and the Russian revolution. Frank formulated his views at a time of a particularly intense offensive of “historical nihilism” (the revolutionary era), but they were also the result of a prolonged study of the genealogy of Russian nihilism, all of which resulted in an insightful analysis of the nihilistic sources of modernity, not confined to the Russian context only.

Marcin Rychter
Something Out of Nothing: An Introduction to Ray Brassier’s Realistic Nihilism
Marcin Rychter draws an intellectual portrait of Ray Brassier and discusses his first book, Nihil Unbound, in the context of speculative realism – a trend in contemporary philosophy with which Brassier used to be associated. Brassier, in opposition to many 20th century philosophers, does not perceive nihilism as a threat but rather as a speculative opportunity. Nihilism – or in other words “the disenchantment of the world”, the evaporation of immanent meaning and value – allows us to conceive reality as independent of “the subject”. In contrast to most speculative realists, especially Graham Harman, Brassier espouses a purely scientific epistemology, which explains his aversion to what he calls “closet metaphysics” with its tendency to introduce imprecise, vague concepts. Rychter presents Brassier’s views and those of other speculative realists as polemical reaction (inspired by Alain Badiou) against such 20th century philosophies as hermeneutics, deconstruction or the study of “language games”.

Krzysztof Rosiński
A Supersensible Necessity
Krzysztof Rosiński interprets Kant’s Critique of Practical Reason by focusing on the problem of the transcendental imagination and the transcendental feeling of respect as a condition for our becoming aware of moral law. The author’s aim is to point to the ambiguity inherent in Kant’s moral project. On the one hand, the ultimate aim of a person wishing to act morally is to eliminate all the determinants of the will which are based in the senses; on the other – the necessary basis of morality is man’s two-faceted nature: both sensual and rational. Rosiński stresses the difficulties arising from the interplay of these terms, especially – the way in which moral ideal undermines the very foundations of morality. Towards the end of the essay he also points to a similarity between or even the sameness of the experience of the sublime and that of the respect for moral law.

Renata Lis
Flaubert
Renata Lis discusses Flaubert’s ideas connected to the problem of the reception of art. Before publishing any of his work, Flaubert enjoyed reading it to an intimate circle of friends. This often resulted in performances during which the author modulated his voice like an actor. Thus, the written text always had to be subjected to a vocal test. In this context Lis also interprets Flaubert’s famous dictum “Madame Bovary is Me”, seeing as a clue to understanding Flaubert’s art which is an amalgamate of bits and pieces of his own life.

Adam Izdebski
Monasticism and The University
Adam Izdebski begins his essay by reminding his readers that the idea of the university was not invented in Bologna. Many centuries before, and not only among Christians, there existed associations whose monastic organization served the purpose of the intellectual development of their members. One of them was the School of Nisbis which was established during the period of the intense development of monastic life in the Syrian world, although the School itself was not monastic in character. The aims of the teachers and students was not asceticism, but attaining perfection through study. European universities were established in similar circumstances: they were based on monastic institutions, but stressed their independence from them. In analyzing the monastic roots of modern academic life Izdebski also makes use of J. H. Newman’s earlier treatment of the phenomenon.