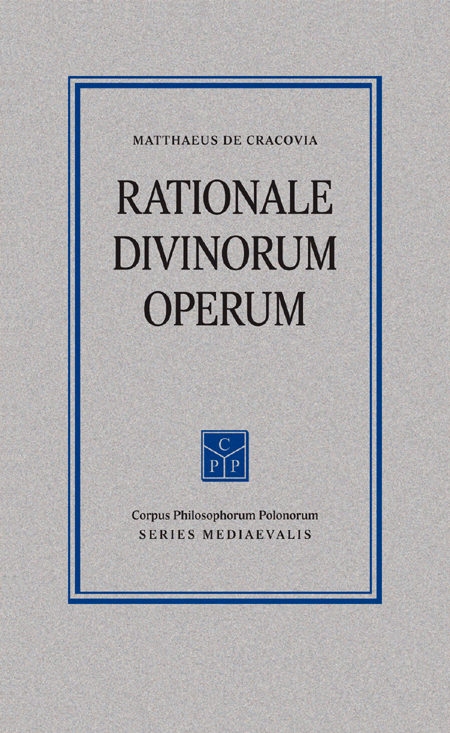 An editor beginning to work on a text that has already been published needs to address the question of whether the work should be started anew, irrespective of the results obtained by the previous editor or editors (the justification for such an attitude usually includes the derogatory word ‘outdated’), or if one should treat the older edition as a starting point and try to use those elements that are still of value. Commencing the work on the present edition of Rationale divinorum operum by Matthew of Cracow, I have assumed it to be a continuation of the study conducted by Witold Rubczyński (or, to be more precise, by the team of scholars supervised by him). The new edition retained a number of Rubczyński’s assumptions, despite significant differences in the methodology and in the use of individual manuscripts. The main reason for this decision is the relatively satisfactory quality of the previous edition of the Rationale – the alterations or corrections introduced to the main body of text are not numerous and make no dramatic changes to the meaning of the dialogue. I also decided to use some of the variants of the text presented in the philological apparatus as the identification of sources from the historical apparatus of my predecessor. Nevertheless, my edition of the Rationale is not simply a slightly shorter and amended re-issue of Rubczyński’s work, but an attempt at ameliorating his version. The most important new elements introduced to the present edition include changing the basis and the principles behind constructing the philological apparatus, verifying and completing the identification of sources as well as extending the assortment of manuscripts used as the basis for the edition to incorporate eight documents unknown to Rubczyński.
The principal task in re-editions of this kind is integrating the results obtained on both stages of research regarding the text and clarifying the relations between the two. These are the issues discussed in the main part of the Introduction. In the first part, Rubczyński’s research is presented or partially reconstructed – due to the brevity of the description of rules he used, some parts of it may only be inferred; further on, the new source material is introduced.
It is then connected with the texts known to the previous editor and, lastly, the principles of the re-edition are delineated. The introduction is complemented by an analysis of the authorship and chronology of the Rationale, as well as descriptions of the Wrocław manuscript that served as the basis for the new edition and the Toruń one relevant to the study of the circulation of the manuscripts. /read more/