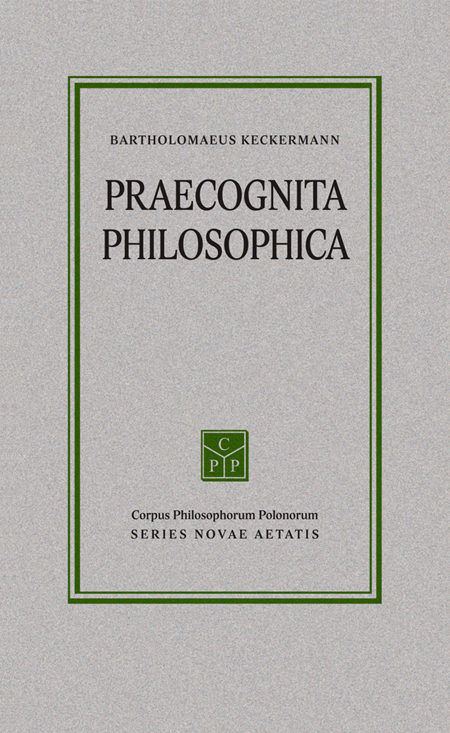 Bartholomaeus Keckermann was born in Gdansk in 1572 in a family belonging from generations to the reformed (“crypto-Calvinist”) confession. In his native city he received primary education and also finished the local gymnasium, then studied at Wittenberg and Leipzig universities and from 1592 in Heidelberg, where he got a degree in philosophy (1595) and later in theology (1602). Although the academic authorities of the Palatinate university, the most influential center of the so-called Second Reformation, offered him a position as a theology teacher, in the end Keckermann accepted the offer of the Gdansk City Senate appointing him to the chair of philosophy at the Gymnasium Illustre, a high school with the last two years of studies at university level. This assignment entailed the task of substantially reforming the curriculum of philosophical studies. The school, also known as Athenaeum Gedanense, Academia Gedanensis, had been active since 1558 and its reform in Keckermann’s time had essentially two objectives. The first was to limit the students’ peregrinationes to academic institutions in other countries, a practice that was costly and not deprived of dangers, such as the risk of infecting the young minds with ubiquitous heresy. The second was to attract the youth from Pomerania and from other nearby regions, especially those within the boundaries of the Polish-Lithuanian Commonwealth, where the Reformation was well established or could gain further ground. Throughout the years after his return to Gdansk until his premature death (1609), Keckermann handled the task with which he had been entrusted with extraordinary self-denial and perseverance. The most substantial fruit of his work was a series of written works, all more or less related to his didactical activity, issued in several editions even many years after their author’s death and well known beyond the walls of the Hanseatic city or the boundaries of Pomerania. /read more/