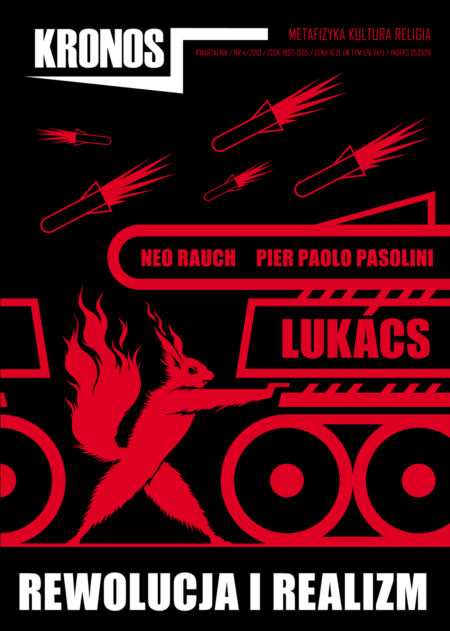 Spis treściEdytorialSummariesZAMÓWe-book
4/2010
REWOLUCJA I REALIZM
Piotr Graczyk
György Lukács and the Empty Grave of Communism
For Lukács Communism was as important as Christ for Roman Catholics – it stood for the outer presence of God under the form of sacraments and miracles which make justice in this world possible. The failure of world communism marked the triumph of liberal Nietzscheanism. In fact, the latter is a philosophical therapy which teaches destitute subjectivity to live in the Hegelian protestant monarchy that is no different from modern liberal democracy. In view of this, Piotr Graczyk claims that it is crucial to go back to Marx and his most important 20th century interpreter, György Lukács, in order to once again be infected with “the disease of Catholicism” – the yearning for the outer presence of God.

Mateusz Werner
The Ruins of Dreams
Mateusz Werner presents his interpretation of Neo Rauch’s paintings. The author begins by expressing his conviction that great art, notwithstanding the artist’s intentions, establishes a space for the articulation of reality. In Rauch’s case, Werner claims, the keys categories are those of aesthetic violence and mystery. Thus he presents Rauch’s art as giving testimony to the experience of the collapse of the modern civilizational project whose aesthetic aspect was the visual correlate of a wholesale transformation of the world. Werner sees Rauch as an archivist of the ruins which remain after the failure of 20th century’s total experiment.

Krzysztof Rutkowski
Nietzsche and Warburg
Nietzsche and Warburg were not scholars in the ordinary sense of the word. Their scholarship led directly to Dionysian wisdom the qualities of which are, on the one hand, courage and boldness, and on the other – weakness and poor health which often lead to madness. Madness is therefore at the heart of wisdom, although it is not, as Nietzsche believed, Dionysian but Apollonian due to its affinity with art, as Krzysztof Rutkowski proves by following Giorgio Colli’s insights. The Apollonian spirit informed also Aby Warburg’s writings. Inspired by the ritual dances of the Hopi Indians, Warburg claimed that the history of art should be “enacted” and not “written”. In order to do this, however, one must succumb to madness. Only then will one be able to see the “crazy images” and “dancing signatures”.

Krzysztof Rutkowski
Aby Warburg and the Signature of Things
Krzysztof Rutkowski discusses the notion of the signature of things (signatura rerum) in the works of authors such as Paracelsus, Boehme and Walter Benjamin, and compares it with the esoteric project of Aby Warburg. In this view, Warburg’s theory turns out to be “an archeology of signatures”, i.e. an attempt to discover primal images and forms hidden within things: from works of art to stars. These forms and images comprise a language which the scientist – according to Warburg – should learn to understand. For this purpose he must employ magic and magical instruments, and just like a detective seek out the seemingly unimportant details which paintings, architecture and natural phenomena abound in.

Dorota Wojda
The Bee and the Spider: Two Models of Mimesis
Dorota Wojda discusses two rival models of mimesis: the metaphor with which the first is described is the bee; the second one – the spider. Both of these metaphors point to the different ways of grasping the relation between the text and reality. The “bee metaphor” encompasses ideas of the creative molding of culture, the combining of tradition and invention, as well as individual and collective action. The arachnological model on the other hand puts emphasis on pure creativity and radical subjectivity which in the 20th century have degenerated into their opposites – re-productivity and depersonalization. Wojda claims that today the “bee metaphor” is once again taking over, although contemporary authors focus more on constructivism and performativity.

Renata Lis
Flaubert’s Hand
Renata Lis tells the story of Flaubert's burnt and scarred hand and discusses the young novelists hypnotic fascination with Victor Hugo’s hand. The author reconstructs the biographical context of the accident and describes Flaubert’s attitude towards his wound which in time he began to associate with dark existential and writerly initiations.

Roswitha Dörendahl
The Pendulum of Suffering: The Concept of Boredom in Schopenhauer’s Philosophy
In Schopenhauer’s philosophy boredom is a phenomenon in which being is expressed in its ultimate negativity. Schopenhauer’s metaphysics of the will places man in a sphere both paradoxical and painful: According to the metaphysical principle of blind will man’s existence is determined by an aimless pursuit. Nevertheless, man yearns for particular things, pursues particular aims and is drawn by the objects painted on Maya’s Veil, i.e. by the world of representation. Schopenhauer’s pessimism culminates in his discussion of human suffering which is caused by the all-consuming power of time: the form of this suffering is precisely boredom through which man comes face to face with the pointlessness of his own existence.

Joanna Komorowska
Opus Longe Humanissimum: Aulus Gellius and Noctes Atticae
The 12th book of Aulus Gellius’s Attic Nights contains the oft quoted definition of humanitas which employs the greek notions of φιλανθρωπία and παιδεία. The author points to the affinities between the ideal of humanitas and the praise of intellectual vigor which Gellius includes in the Prologue to his work.

Tomasz Rosiński
The Dilemmas of a Political Skeptic
Ever since Petrarch’s times it has been the custom to see Cicero as the model hypocrite whose sublime ideals can hardly be said to have gone hand in hand with political practice. Tomasz Rosiński presents a different approach to Cicero’s theory and practice which points to their deep, philosophical coherence. The abhorred Realpolitik typical of the late Republic must be seen as a direct consequence of the Academy’s skeptical pragmatism. It is in this light that most of Cicero’s decisions, both political and philosophical, should be understood.

Andrzej Serafin
Facta Est. How Nietzsche Became a Philosopher
The young Nietzsche’s writings contain some undiscovered treasure. By examining unfinished treatises and Nietzsche’s letters of that period Andrzej Serafi n hopes to reconstruct ideas which Nietzsche never fully developed. What Serafin finds most intriguing is the moment when Nietzsche sheds his philological apparel and begins to storm the bastions of Schulpforta and Basel in full philosophical armor. His former allies, Wilhelm Ritschl and Valentin Rose, now become Nietzsche’s sworn enemies. Against them Nietzsche sides with Democritus in whom he sees a prototype of the Super-Human and a prefiguration of nihilism.

Piotr Graczyk
The Young Marx’s God
Aristotle claimed that each political system is based on a particular kind of love: in the case of monarchy – paternal love; in a republic – love between friends. According to Piotr Graczyk, at the basis of the communist system, as described by the young Karl Marx in his 1844 writings, there lies the sensual, carnal love between a man and a woman.

Piotr Nowak
The City of Women
Piotr Nowak in his analysis of The Assemblywomen by Aristophanes points to the weaknesses of Democracy understood as “a mission”, of feministic projects whose aim is “social genderization”, as well as of falsely understood freedom. In Aristophanes’ work women take over power and are led by certain assumptions: that the realm of politics is like that of the household – that it is biological or even sexual; all are equal, there is no private property, and the aim of the state is to satisfy bodily needs. Athenian Democracy soon degenerates into radical Communism where all are equal but some are more so, and where politics turns into biopolitics which abrogates all social ties and relations.