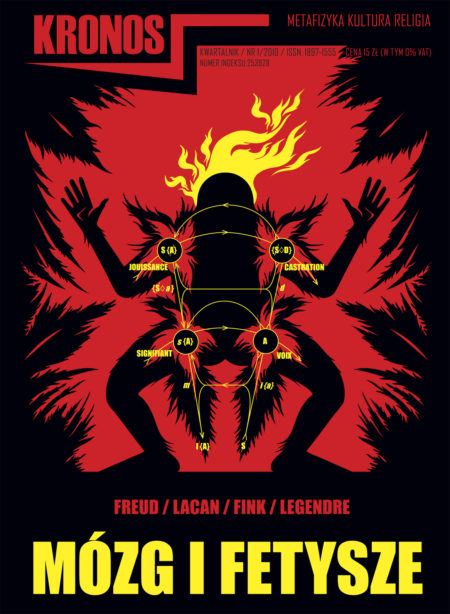 Spis treściEdytorialSummariesZAMÓWe-book
1/2010
MÓZG I FETYSZE
Jacek Schodowski
The Subject of Desire. Reading Subversion du sujet et dialectique du désir
The essay is a close reading of one of Lacan’s most interesting and enigmatic texts – Subversion du sujet et dialectique du désir. Schodowski interprets Lacan in the context of «returnig to Freud», higlighting Lacan’s references to the works of the founder of psychoanalysis. The author suggests that the essay is at the center of the Lacanian paradigm, both due to its style and conceptual network – in it we find most of the categories devised by Lacan, which for the first time are presented in a single topological figure. It enables us to grasp the basic concepts (such as big Other, l'objet petit a, symbolic and imaginary identification) and their mutual relations. It also points to the place and importance of topology in Lacan’s teaching. Schodowski analyses the central problems of Lacan’s text: the construction of the subject, its relation to desire, the relation between language and the libido and the function of phantasms.

Piotr Graczyk
Solving Tragedy
The essay attempts to analyse the Hegelian dialectics of tragedy from The Phenomenology of Spirit in the context of Lacan’s discussion of Antigone in his Ethics of Psychoanalysis. The key tools of Graczyk’s analysis are the concepts of autonomy, selection and the power of exposition. The last of these refers to the concept of the unconscious in Hegel and psychoanalysis. The essay explores the problem of the conflict between tragedy and philosophy over the issue of the meaning of history.

Paweł Dybel
Freud and the Gender of Melancholy. A Polemical Analysis of Melancholy in Judith Butler and Julia Kristeva
In Freud’s work the concept of melancholy occupies a prominent position. However, it is not directly linked to the problem of gender. The two contemporary feminist thinkers, Judith Butler and Julia Kristeva, claim that there is a strict correspondence between the phenomenon of melancholy, gender and the individual’s sexual orientation. Each, however, interprets this correspondence differently, taking as their starting point assumptions that cannot be easily reconciled. Kristeva stresses in her theory of melancholy the primary character of sexual difference; Butler, on the other hand, points to the key role of the individual’s sexual orientation. Dybel highlights the differences between the two approaches and offers a critical interpretation of both.

Szymon Wróbel
To Do Justice to Psychoanalysis: Foucault’s Reading of Freud
The title of the essay refers to the famous statement in Foucaults introduction to his History of Madness where he writes that “we have to do justice to Freud”. The problem, however, is that Foucault’s philosophy does not seem to do justice to Freud. Foucault’s use of Freud is ambiguous: sometimes he uses him for purely instrumental purposes (when reconstructing the history of madness and sexuality), but sometimes – for anthropological purposes signaling Freud’s role in redefining our common humanity and particularly our relation to language, life and work. Wróbel confronts Foucault’s ambiguous reading of Freud with the equally ambiguous reading of Foucault by Derrida. Derrida discusses Foucault twice. Once in the essay Cogito and "The History of Madness" in which Derrida takes on Foucault’s understanding of Descartes and his role in the exclusion of madness from the realm of reason. The second time – in his essay To Do Justice to Freud. Here Derrida disagrees with Foucault whether Freud managed to reestablish the body’s communication with reason which Descartes destroyed.

Lena Mangone
Karol Irzykowski’s Lacanian Reading of Freud
The essay discusses the earliest instance of preoccupation with psychoanalysis among the literary critics in Poland – Karol Irzykowski’s essay Freudism and Freudians written in 1912 after the author participated in a conference of neurologists, psychiatrists and psychologists in Cracow. This highly competent analysis of Freudism, which focuses on the seventh chapter of The Explanation of Dreams, is strikingly similar to Lacan’s later insights. In 1903 Irzykowski published the novel Pałuba which is very often seen as foreshadowing Freudian ideas. Irzykowski tries to get at the core of Freud’s theory using the very limited resources available to Polish readers at the time: only Freud’s American lectures were published in Polish and Freud was discussed mainly by the psychiatrists who treated psychoanalysis as a mere method of therapy. For Irzykowski, however, Freud is a genius of interpretation whose theory proves that the unconscious and its creations are a text which can be subjected to literary analysis.